Losing a loved one to the coronavirus 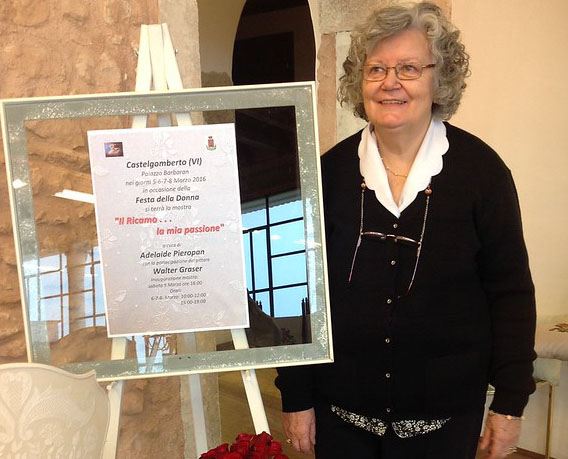 Adelaide Pieropan died from complications of Covid-19 on April 11. She was 74. Photo courtesy of Gabriella Laura Menegatto

Gabriella Laura Menegatto was quarantined in her home in Puerto Rico when her cousin gave her the news: “Mom, after a long fight, lost the battle.” After 12 days in intensive care, Adelaide Pieropan, Menegatto’s aunt, died of Covid-19 in a hospital in Italy. Pieropan was 74.

Menegatto, a retired nurse, knew how fatal the disease caused by the novel coronavirus can be, but the message she received on April 11 at 7:51 a.m. still came as a shock. What pains her the most is the thought of her aunt dying alone, away from family and surrounded by strangers.

“She went to the hospital, and her daughter never saw her again,” Menegatto, 64, said in Spanish. “Dying alone in that environment, with people dressed all in white… It’s difficult, it’s absurd. It hurts.”

Pieropan started exhibiting symptoms around March 10, a few days after she left her house in the province of Vicenza to do some shopping. It started with a fever and what seemed like a cold. A doctor visited her home and prescribed antibiotics, but she didn’t get better.

On March 25, the doctor referred her to the hospital and she was tested for Covid-19. The result came back positive. Pieropan was admitted to San Bortolo Hospital, in Vicenza, that same day, and she was placed in an isolated area, where only patients and staff were allowed.

“My friend told me the area was shielded,” said Menegatto, who contacted an old friend who works at the hospital to let her know her aunt was there. “If you die there, your family will never see you again.”

“I cried for two days,” Menegatto said. “Everything happened so fast.”

Vicenza yesterday confirmed 160 coronavirus-related deaths since the beginning of the crisis. Italy has reported the third-highest number of Covid-19 in the world at 183,957 and the second-highest death toll at 24,648, only behind the United States, according to Johns Hopkins University. Italy saw the lowest daily number in coronavirus deaths in a week on Sunday. On Monday, the amount of people identified as infected with the virus dropped for the first time since the country’s outbreak started.

More than 4,700 miles lie between San Juan, Puerto Rico’s capital, and Vicenza, in the northeastern Veneto region of Italy. The last time Menegatto, who moved to the island 36 years ago, traveled that distance and saw her aunt was in October.

Menegatto described her aunt as a smart, kind and generous woman. She was an active member in her community, and neighbors knew her as a caring person who participated in local festivals. She used to enjoy going out into the woods to collect fungi as her pastime.

Pieropan was a beautician by profession, but her passion was embroidery. She taught the art and took courses in her free time to perfect her process. She even traveled three hours on a train to Bologna to take a half-hour class to master a specific stitch. Menegatto recalled Pieropan used to read a crochet and knitting magazine called Mani Di Fata (Fairy Hands) since she was a teenager.

“She always loved to crochet,” Menegatto said. “The magazine arrived at the house every month.”

Pieropan was 14 years old when her older sister, Menegatto’s mother, brought her to live with her to help raise Menegatto and her sister. She spoiled her niece, giving her money to go to the movie theater and cooking whatever she craved.

“My mom was the serious one, the one that scolds,” Menegatto said. “My aunt was a person who smiled, who didn’t have to talk much because she told you everything with her eyes.”

Menegatto’s mother, who is 84 years old, traveled to Puerto Rico on March 5 and hasn’t been able to return to Italy because the airline has cancelled flights from the island to the European country.

“Her instinct pushed her to come here, and she was saved,” Menegatto said. “She can’t believe what’s happening.”

On the day her aunt died, Menegatto’s mother told her to call Pieropan’s daughter: “I feel that my sister died.”