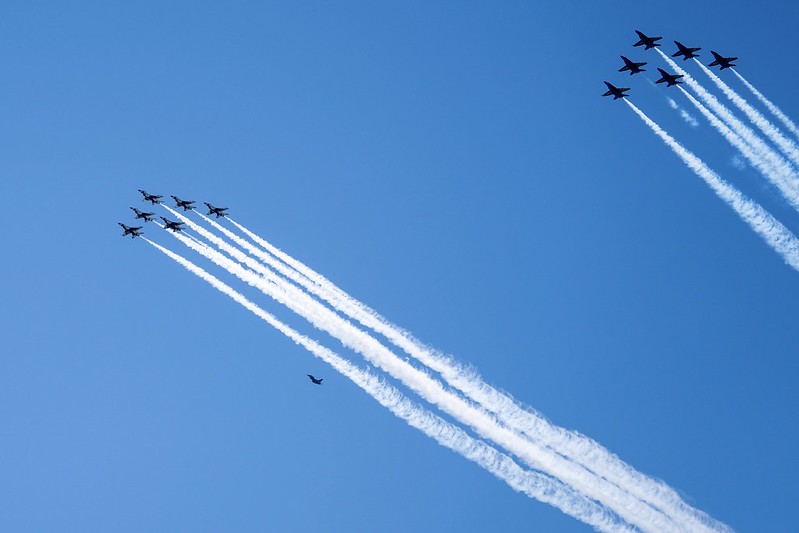 Despite social distancing orders, spectators packed waterfronts, rooftops and bridges to get a glimpse of the  United States Navy and Air Force  flyover performances of  the Navy’s Blue Angels and Airforce’s Thunderbirds.

The elite stunt pilots flew over of major cities in the northeast in a salute to essential  workers in the fight against Covid-19.

Even medical workers fighting the Covid-19 pandemic, often without a break,  were able to pause and appreciate the performance in their honor.

“The Blue Angels signify such courage to the highest level,” Julie Drexler, a nurse manager of critical care at Mount Sinai West in Manhattan, told CBS News. “To be honored by them signifies the courage we have shown. We had to step up and rise to the moment in this crisis and we pulled through. It almost signifies the courage of nursing during this virus.”

Operation America Strong is expected to continue, having flyovers in cities all over the United States.

President Donald Trump is urging governors to reopen despite health officials insisting on proceeding with caution. In a call on Monday to state governors, Trump suggested they ought to “seriously consider” reopening public schools by the end of the academic year.

Recognizing the link between the school system and economy, the Trump administration is working to save face rather than lives because, according to the president, “young people seem do very well” after contracting the virus, forgetting about those who have to teach the young people.

The comments come as the Center for Disease Control and Prevention is working on guidelines to return students safety to schools, though it is not intended to be before the close of this academic year. The precautions include having desks 6 feet apart, lunch in classrooms instead of cafeterias and closing playgrounds.

Gov. Andrew Cuomo outlined a 12-step plan to reopen some parts of New York State while also continuing to contain the virus.

“It’s a very fact-based, data-driven reopening plan for regions that would keep them safe and allow the economy to reopen in phases,” said Cuomo at a press conference held in Syracuse.

Cuomo’s plan includes measures to anticipate a second wave as New York reopens, which would be done by watching hospital capacity rates, 70% being what he referred to as a “danger zone,” and also transmission rates in the state.

Additionally, Officials need to show a significant decline in cases before they can open nonessential businesses in their region, according to Cuomo.

“Emotions can’t drive the reopening process,” said Cuomo. “We have to act as our logical selves here.”

Although the number of reported deaths in New York City has seen a decline, 337 as of Monday, the five boroughs will not be on the list, “unless a miracle happens,” said Cuomo.

The governor said part of the reopening strategy would consist of Covid-19 isolation facilities and creating a dedicated group that will work to track the spread of the virus throughout the state. But despite the decrease in deaths, Cuomo is urging New York to keep its guard up.

“We have to remain vigilant. This is not over,” Cuomo said.