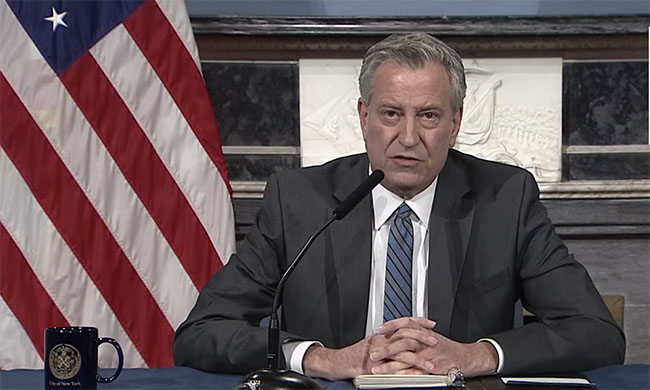 The coronavirus continues to slash at the city.  It’s next victim is the budget.

Mayor Bill de Blasio announced today that there will be up to $2 billion in cuts for the upcoming fiscal year.

“We hoped this day would never come, but it has,” said DeBlasio. “If ever there was a time to draw on reserves, it’s now.”

The cuts would close outdoor pools and beaches, suspend up to 1000 one thousand summer camp slots, suspend the Summer Youth Employment program, and cut training, overtime, materials and professional development in the school system. The department of education would lose up to $827 million in cost saving measures, according to the proposed budget.

The budget, which was originally intended to be $95 billion, is now approximately $89.3 billion dollars. De Blasio said  that New York City is predicted to lose $7.4. billion in tax revenue in the next fiscal year, due to the pandemic.

In order to overcome this emergency phase, the mayor said that the city would tap into its fiscal reserves.

The mayor said that this financial decision is a reflection on the lack of federal aid needed for the state of New York. He also criticized FEMA, mentioning that the city is expected to pay 25% of FEMA aid.

“We have been the epicenter,” he said.“When you look at the impact here, anybody with a heart would recognize that the federal government has to come to the rescue.”

He claimed that the city should receive at least $7.5 billion in federal aid, but the federal government has prioritized helping large companies instead.

“We got 1.4, billion. We’re the epicenter of the crisis, 8.6 million people, the airline industry got $58 billion,” said DeBlasio. “But a bailout for the place that needs it most has been minimal.”

House Speaker Nancy Pelosi said the House is working on an additional relief package. It would largely mirror the CARES Act passed last month, which provided $2.2 trillion to fund individual stipends and financial support to local and state governments, corporations, small businesses and hospitals , providing New York state with about $3 billion. Congressional leaders are also constructing a smaller package which would aid $250 billion for small businesses. But since both the House and Congress have extended their recess until May 4, the wait time for these additional legislations is uncertain.

“President Trump, here’s my appeal to you. Help us back up. Tell Mitch McConnell, that we need stimulus 3.5, and we need it directly to New York City, directly to New York State, so we can keep providing the help that people need,” said De Blasio. “If you lead, the Senate will follow. If you are silent they will not. It’s on you, Mr President.”

In an effort to further flatten the curve, Governor Andrew Cuomo extended the NY Pause rule until May 15.