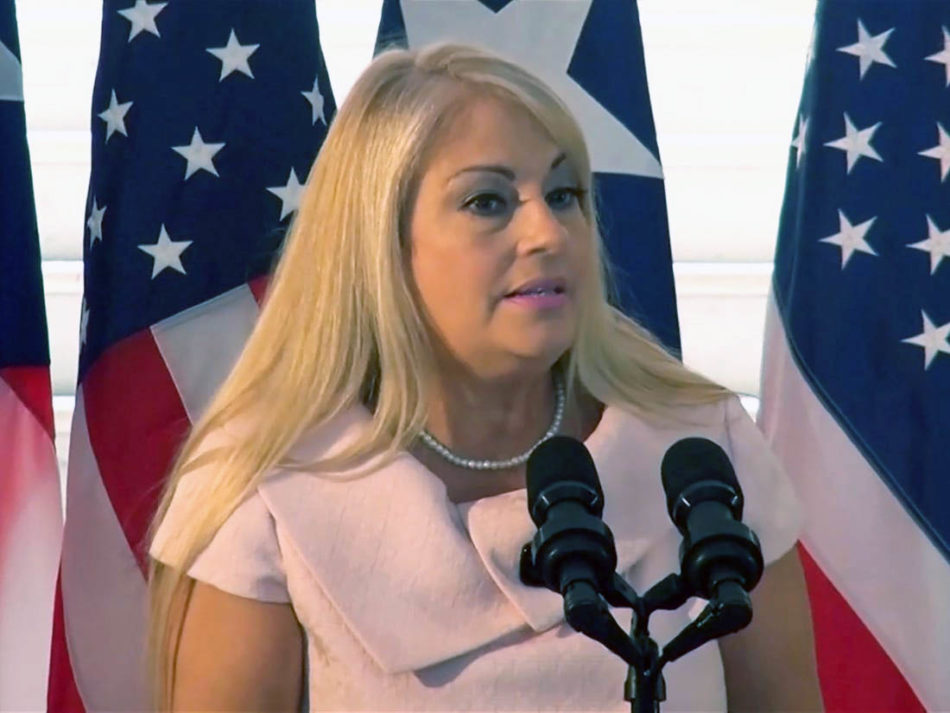 Puerto Ricans flocked to grocery stores this morning after Gov. Wanda Vázquez Garced last night announced stricter regulations for the island’s coronavirus lockdown during Holy Week, ordering almost all businesses including supermarkets and banks to close from Friday to Sunday.

Vázquez Garced said only pharmacies and gas stations will operate over the weekend, and warned people will only be allowed outside if they need to seek medical help or an essential service. She ordered businesses to bar anyone not wearing some sort of face mask from entering until further notice, and said scarves wrapped around the face would be admitted.

“From Monday to Thursday, the order will continue as it is,” said Vázquez Garced during a press briefing last night. “From Friday to Sunday, you can only travel on public roads for emergencies or essential services.”

The government’s latest measure to try to contain the spread of Covid-19, the disease caused by the novel virus, gives Puerto Ricans only two days to stock up on food for Easter weekend, as a previous executive order limits the amount of people that can transit the roads according to their license plate number.

Drivers with licence plates ending in even numbers can transit on Mondays, Wednesdays and Fridays, while those with uneven numbers can do so on Tuesdays, Thursdays and Saturdays. No one is allowed to drive on Sundays.

The curfew imposed on March 15 has closed most businesses except supermarkets, gas stations and banks and forced citizens to stay in their homes unless they need to seek an essential service, with a curfew from 7 p.m. to 5 a.m. The lockdown runs through April 12, and the governor did not say last night if she will extend it.

The governor today announced she signed into law a bill that punishes people that violate any executive order that imposes a curfew with six months in jail and a $5,000 fine. Vazquéz Garced’s executive order already punishes violators with a six-month jail term or a fine for the same amount. So far, according to Vázquez Garced, the police have arrested 275 people for violating the curfew.

Puerto Rico has reported 513 cases of Covid-19 and 21 deaths as of this morning. Earlier today, Health Secretary Lorenzo González Feliciano said “our worst moment hasn’t arrived.” The island expects the apex between April 15 and May 8.

The government cancelled the orders, and Vázquez Garced last night denied having any knowledge about the purchase.

The American Civil Liberties Union on Saturday filed an injunction to ask the court to declare parts of Puerto Rico’s curfew unconstitutional, arguing the executive order violates the right to intimacy in the home. It is the first coronavirus curfew lawsuit the ACLU files in a U.S. jurisdiction.

The lawsuit, presented in Puerto Rico’s Court of First Instance challenges provisions of the order that punish violators with up to six months in prison and prohibit people who are not part of the “nuclear family” from entering houses. ACLU also argues the executive order favors religious activities on Sunday, while restricting commercial activity that is permitted during the week.

The lawsuit names three Puerto Ricans who leave their homes every day to care for their mothers. They ask that the executive order be amended to clarify whether they are exempted from the curfew and the transit restrictions when travelling to their mothers’ homes.

“It is in times of crisis when the rights enshrined in the Constitution are most protected; a crisis is not nor can it ever be an excuse to violate them or create exceptions not contemplated neither in the Constitution nor in its interpretative jurisprudence,” the lawsuit states.