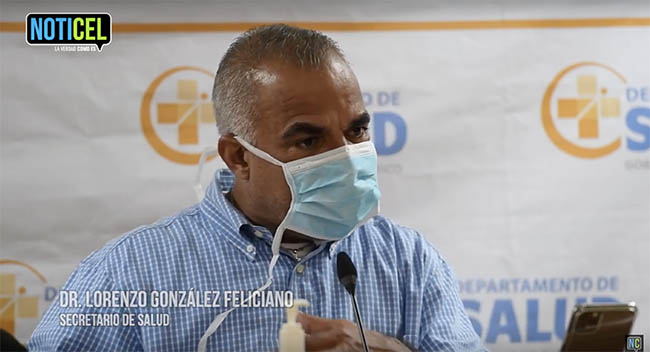 As Puerto Rico braces for a peak in coronavirus cases, the island’s health secretary yesterday said two hospitals will be investigated and fined for turning away patients that presented symptoms associated with Covid-19, the disease caused by the novel virus.

Lorenzo González Feliciano said he ordered an investigation into the hospitals, including one designated by the government to care for Covid-19 patients, and assured the institutions will be referred to Puerto Rico’s Department of Justice.

“There was an investigation,” said González Feliciano during a press briefing. “The paramedics in question are interviewed, the relatives are interviewed and I think the patient, and a determination is made. The two facilities will have penalties, both a fine and a referral to the Department of Justice.”

Puerto Rico has reported 286 cases of the coronavirus and 11 deaths as of Wednesday.

González Feliciano said early yesterday that preliminary estimates indicate the peak in coronavirus cases in the island will be on May 8. He added that Puerto Rico’s Department of Health will track people who have tested positive for Covid-19 in order to have a clearer projection.

The secretary said the U.S. Food and Drug Administration approved 200,000 rapid tests for coronavirus acquired by the local government. Puerto Rico bought the test kits before confirming they met the agency’s approval, and the rapid tests have been sitting in an airport in the U.S. mainland. These tests require a prick of the finger and can deliver results within an hour.

Wearing a blue surgical face mask, González Feliciano warned that Puerto Rico lacks ventilators, heeding that the island is competing with the U.S. mainland for the crucial equipment. He said there “is no guarantee” that the ventilators will arrive.

“It’s important to know that, regardless of what has been ordered, very little, if not nothing, has arrived to Puerto Rico because a lot is in the production process and the other thing is that there is significant demand from all 50 states for this type of equipment,” he said.

He said Puerto Rico has about 500 ventilators available, and the costs of the ventilators bought by the local government range from $18,000 to $30,000.

Meanwhile, Gov. Wanda Vázquez Garced yesterday ordered an audit in Puerto Rico’s Department of Health after González Feliciano informed her about the discovery of expired medication. Vázquez Garced did not detail the quantity or what type of medication was found.

“The secretary of the Department of Health, Lorenzo González Feliciano, today informed me about an inventory of expired medications in the department,” Vázquez Garced said in a written statement. “As soon as we became aware of this today, I instructed the recently confirmed Secretary of Health to carry out the required forensic audit and refer it to the appropriate authorities.”

Puerto Rico’s Department of Health is embroiled in controversy amid the coronavirus outbreak. Concepción Quiñones de Longo, González Feliciano’s predecessor, revealed federal authorities are investigating the agency for contract management and the acquisition and distribution of Covid-19 tests, according to local newspaper El Nuevo Día. Quiñones de Longo singled out an executive assistant in the agency as the person responsible for the mismanagement of hundreds of tests.

González Feliciano on Monday fired Mabel Cabeza and yesterday assured she “has no place in the system.” Cabeza was chief of staff while former Secretary of Health Rafael Rodrígurez Mercado served. Rodríguez Mercado resigned last month after facing criticism over the distribution of tests.