In Chinese culture it is common to wear a facial mask to protect oneself against colds and flu as well as to protect others. Here in New York City, Chinese people say that their facial masks are sometimes misinterpreted as a sign of serious illness. Photo by Kathleen Taylor

As the coronavirus death toll continues to rise, incidents of racism and prejudice against New York’s Chinese population have reportedly increased.

“I think many of us may feel hurt and angry for those stigmatizations and discriminations,” said Yao Wang, President of the NYU Chinese Student Support Group.

According to Worldometer, a live independent statistics website, there have been 45,222 reported infections to date and 1,118 people confirmed dead globally as a result of the coronavirus. Thirteen  infections have been reported in the US. There were six people in New York City who reportedly showed symptoms of the virus, but the city’s Department of Health has since declared all six to have tested negative for the virus.

In the wake of the outbreak, Wang said that there had been incidents of discrimination, insults and violence against students of Asian descent in New York City. Wang also said that anti-Asian rhetoric had been spread on social media. 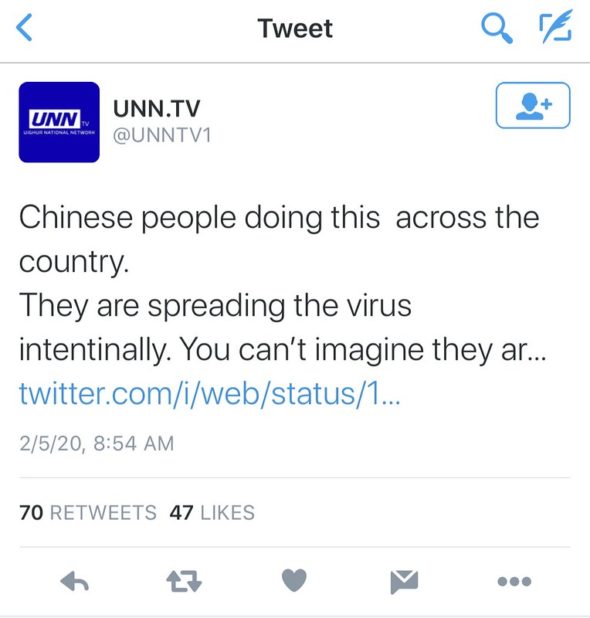 Throughout social media, people have referred to the Coronavirus as “ChinaVirus” or “WuhanVirus”. Yao Wang, President of the NYU Chinese Student Support Group, says that these labels are hurtful as they encourage ethnic and regional prejudice.

Wang also referred specifically to anti-Chinese messages written in a bathroom at the Columbia School of Social Work as well as on a blackboard in the Columbia Main Library.

Kally Zhao, President of the NYU Chinese Students and Scholars Association, said that labeling this virus as “China Virus” is offensive.

“It’s deeply offensive because when there is a flu outbreak in the US no-one calls it ‘US virus’. And Zika and Ebola – no-one calls them by their origin. But all of a sudden because China is the country where this virus had its first outbreak it’s being named after a nationality and an ethnicity”.

Zhao said that incidents of anti-Asian discrimination, mandatory self-quarantining, and concern for family members in China are causing Chinese students a lot of stress.

“I think it’s definitely hard because first of all you’re by yourself and I think by being asked to self-quarantine there’s also certain connotations. And then if you talk to family members back home about it you know they may have certain feelings about it and basically it’s just a lot of stress on one person”.

Both NYU and Columbia have enforced a mandatory self-quarantining of all students returning from China. Students are required to stay in their homes and avoid contact with other people.

“I received a report of an incident where one of the international students who had a really high fever was sent to the hospital but the hospital refused to hospitalize her,” said Zhao. “So she was essentially sent home with medicine to be self quarantined”. 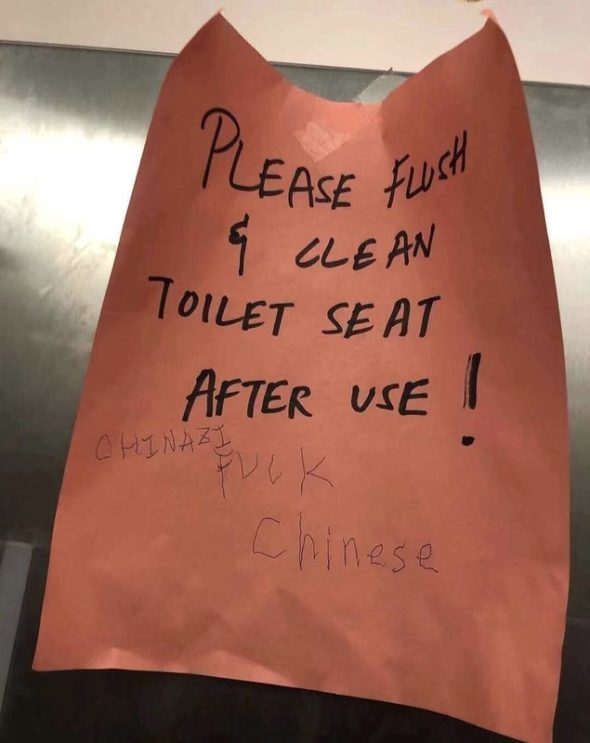 A message found in a restroom at Columbia School of Social Work in New York City. Photograph shared by Yao Wang, President of the NYU Chinese Student Support Group.

But Chinese students are not the only people impacted by the virus. Mae Lee, Executive Director of the Chinese Progressive Association, said that small business owners in Chinatown are also suffering because of people avoiding Chinatown in fear of the Coronavirus.

“The small business owners say they’re getting noticeably less business,” said Lee. “Many of their business is from visitors who don’t live there so somebody’s reacting in terms of not coming down to Chinatown”.

Lee said this was unusual at this time of year as the Chinese Lunar New Year which took place over the past two weeks usually attracts more visitors.

But with no reported infections in the city, compared to thousands of influenza infections, health care providers say that people in the US should be more concerned with ordinary influenza than with the coronavirus.

“We advise the community to be cautious, but not panic about the Coronavirus,” said Dr Perry Pong, Executive Vice President and Chief Medical Officer of Charles B. Wang Community Health Center in Chinatown.

“Everyone should get their flu shot since we have seen an increase in flu cases during this flu season which have similar symptoms to the Coronavirus,”  said Dr. Pong.

The Center for Disease Control and Prevention has reported up to 12 million cases of flu-like symptoms and 310,000 hospitalizations related to the flu since flu season began on October 1. New York City is reported as having a high level of influenza-like illness (ILI), with 10 children having died of flu in the past week. Only 13 people have been confirmed infected with the Coronavirus in the US, none of which are in New York City.

“We ask people to just take appropriate hygienic precautions,” said Dr. Perry. “Wash your hands, cover your mouth and nose with a tissue or your arm if you cough or sneeze, and stay home if you are ill.”

“I personally definitely notice when I am wearing a facial mask in public people are very hesitant to approach me,” said Zhao. “I get weird looks all the time”.

Zhao said that many Chinese people are now afraid to wear masks in public because of recent hate crimes against Asian people wearing masks.

Zhao referred specifically to a video that has spread throughout social media platforms showing a man violently attacking a woman of Asian descent who is wearing a facial mask. The event occurred at Grand Street station on February 2nd and the woman who posted the video claimed that the attacker called the victim a “diseased bitch” before hitting her over the head with an umbrella.

Wang said that a lot of prejudice originates from misunderstanding around the wearing of masks.

“In China, it’s very common to wear masks in our daily life. People may wear masks if they have a cold, if they’re allergic to pollen or dust, facing hazy weather, or even if they have no make-up on.”

But Wang said that here in the US, wearing a mask is interpreted as a sign of serious illness. This has lead to stigmatization and discrimination around the wearing of masks.

“Some people fear to wear masks on the street even if they have a cold and just don’t want to infect others,” said Wang.

As Chinese New Yorkers worry about families and friends back home, Lee urged fellow New Yorkers to visit Chinatown, to speak to people within the Chinese community, and to take steps to learn more about the situation and what Chinese people are currently going through.

“The virus is the illness,” said Lee. “It’s not the person.”