The tree of solace 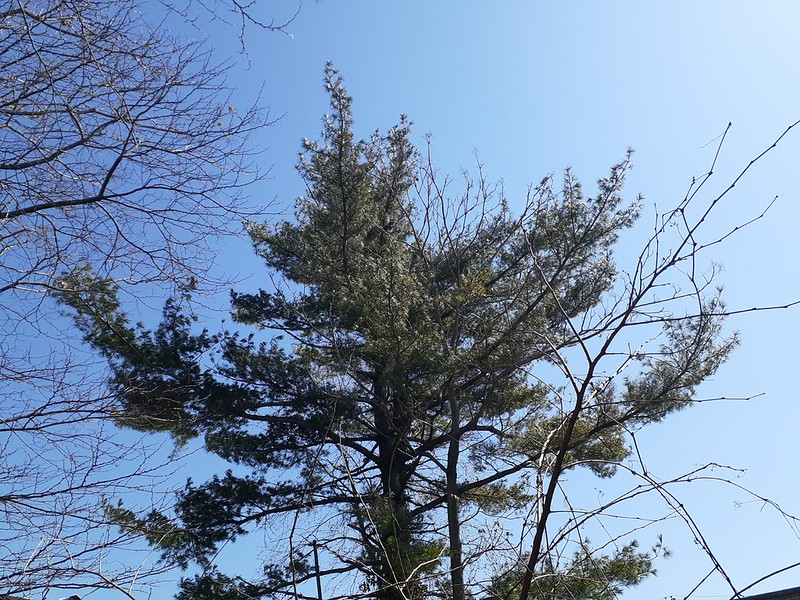 A tree in Brooklyn offers solace during the coronavirus pandemic. Photo by Karen Camela Watson

This essay was written on March 25th

I have been home for a week. Except that one day I went out to do a story about my neighborhood.

There is a church bell that tolls on the hour. It’s somewhere in the back past the tree. I never heard it before. I’ve never seen the church. I will search for it one day.

Governor Cuomo says I should stay inside. I better do it. I don’t want to get sick. Now I’m thinking if I go out the front door there is a mass of virus-laden air just waiting to descend on me and infect my lungs. But I have to put out the garbage today. Or maybe tomorrow. They pick up early Friday morning.

The tree is my new lighthouse. If I can see it, I will make it through this coronavirus sea that just popped up out of nowhere. Who dropped a whole globe in a merciless, malevolent sea? Why? What did we do?

We are fighting to get out – reaching for light, gasping for air – striving upward so we are not consumed.

My new routine includes waking up. The virus did not get me overnight. Whew. I go straight to the back door, open and look to the right. The tree is still there. Nonchalant. Unworried. Makes me feel silly sometimes. Everything is quiet. Normal. I turn on 1010 WINS. 22 minutes is not enough, I leave them on. Then I go online to the New York Times, NBC, ABC, CBS, Fox and every other major news outlet.

Coronavirus has upended my world. Upended the globe. Hijacked us. The creepy up-close images of the coronavirus showing the “crown-like spikes” induce nightmares. I wish they would stop showing them.

The days are starting to blur. I did put out the garbage yesterday. And again today. Today I went out to meet the guy delivering the wine I ordered. Never did that before. I don’t even drink much. Just social occasions, but those are gone so, maybe an occasional glass will help me concentrate better. I’ll see.

I checked on the tree today. Several times. Just checking. It looked fine, the upright sentinel. Unconcerned about me and my fluctuating human emotions. Dismissive of my attachments to it.  But I don’t care. I’m going to keep checking till this diseased sea lets go of us and kicks us off on a beach somewhere, then recede, off to mutate underground and return in years, decades or even a century. We will be ready for its descendant then. Immuned and vaccined we will be – impenetrable victors. We have to be.

We saw it coming, it seemed far away, manageable. We continued our lives, living, laughing, loving, then looked up. The nightmarish microscopic invaders had already lodged in our upper respiratory tract, spreading out, latching on hosts, determined to cause historic mayhem.

Just three weeks ago, during the first week in March (this month is long), my grad school class was at McSorley’s Ale House bringing to life, so to speak, Joseph Mitchell’s “The Old House at Home” reading. It was a fun, bustling, history-filled evening, with virus and restrictions far from our minds.

Last year I finally decided what I wanted to be when I grow up. I started out wanting to be a journalist when I was really young but got busy and forgot all about it. Now I’m sure. Also a fiction writer, designer, playwright, investor and so on, but mostly a journalist as a day job.

So after years of working in almost every industry in New York, and leaving each job for one reason or another, I applied to journalism school and now I’m in grad school in Manhattan with students who absorb tech while I still have to learn it cerebrally.

They are wonderful and helpful classmates though, who don’t mind answering all my questions; encourage it even. The school tells me I am now a multimedia journalist. Of course.

I live in Brooklyn.

I can’t shake the feeling that this coronavirus snuck up on us. How could it happen so quickly?

Right after the ale house outing, I was at Prospect Park the following week. A sunny, beautiful day with families and volleyball and sunbathing and biking and the farmer’s market at Grand Army Plaza open early because it was such perfect spring weather. The Botanical Garden was wide open with one tree in full pink glory, waiting for the others to catch up. It closed the following day.

Yes, sure people were starting to wear masks since February or so and we were keeping our distance from each other on the subway. Then schools, including my school, started closing in earnest during the second week of March. But it was all supposed to be toward an “abundance of caution” for two weeks or so. Being prudent while the city, state decision-makers and experts meet to confer and tell us how to proceed going forward.

President Trump and Gov. Cuomo are disagreeing about something again. What is the best way to fix this thing that seeks to destroy us collectively. Who has the answer. Scientists and innovators are working hard to race ahead of its onslaught and halt it in its tracks.

The growing grief I feel is profound sometimes. It goes in and out and stymies productivity for hours on end. Increasing alarm that what initially seemed like a badly written novel is now real and deadly. Lives being lost on the hour. Many others stuck on ventilators. Doctors and nurses and EMS workers describing war zone-like conditions.

What happened. What and how. I get dazed sometimes. Then I can’t focus. I listen to soothing music and pray for a miracle. Or several. I believe it will come. We are all working so hard to conquer this thing, it just has to.

On Thursday we had an 8-hour class on Zoom. It’s a class that simulates a full newsroom workday with anchors, reporters, producers, sound and tech people and camera crew. Wasn’t sure how we were going to pull it off remotely but somehow the professors managed to guide us through an adapted version, and we were able to have a remote newscast at the end.

I got to be an anchor once. It was fun. Mostly though, I’m on camera 2. I mastered that. Someday I will be ready to be a producer. I’m working my way up.

It was sunny, so for the first few hours of the class I was able to sit in the back with the tree to my right (it’s an evergreen) and two smaller, still mostly bare ones to the left. It was a little distracting as I tried to photograph a moving squirrel, then a cute bird, but didn’t get any good pics. I moved back indoors for the second half; it was getting chilly anyway.

It’s nice seeing my classmates again. I miss them. The first class on Monday was hard. We connected and had class as usual – as much as possible – then class ended, and the screen went blank. I stared and stared at the screen. No after class chatter, no bumping into someone from my other class and brainstorming stories.  No hi to professors or staff or any person. No person.

But I adjust. Continue to stay in touch by text and phone and sometimes email. Maybe Instagram. I don’t really get into all the other apps my classmates are into. Just so many apps for everything.

And I don’t miss the subway. I already only used it when I had to over the last few years. I am moving things around to set up a real home office that should help me be more productive. I even talked about learning how to make bread and cook fancy dishes, but I know it’s not going to happen. I make quick, light dishes when I get hungry then run away from the kitchen. Always been that way. I did buy instant coffee though. Trying to replicate that cup of coffee I get on my way to class. It’s something, it’s comforting.

I know it’s hard for the essential workers who get up and go out everyday and put themselves at risk just by the nature of their jobs. I am not complaining. I am bewildered. Like everyone else, I believe. We read about 1918. We read about other pandemics. I remember SARS and a bunch of other flu-like contagions. I remember the stunned trauma of 911: the sinking acceptance of what had happened, the long aftermath of cleanup and physical recovery, mourning the loss of lives, loss of innocence. Healing, moving on.

Now this. COVID-19 is such a dignified, official sounding name. Sterile, scientific, seeming removed from the actual grimy, insidious trail of this novel coronavirus.

But human beings win. We were designed to do so. Watch us focus our concerted best, most brilliant, heroic and compassionate selves on defeating a common enemy. Sooner than later, we will get our lives back.