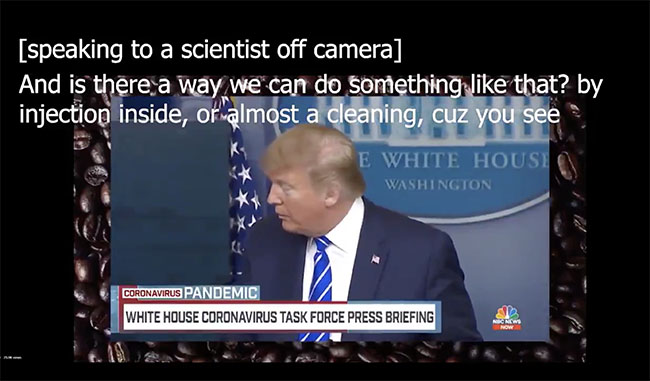 President Donald Trump delivered an unusually short statement and refused to answer any questions from reporters at today’s COVID-19 press conference. This comes after the President received widespread criticism for suggesting, injecting disinfectant and UV rays could be an effective treatment for the coronavirus during yesterday’s press conference.

I dunno man, he doesn’t sound like a stable genius to me.#walkback#TrumpIsALaughingStock https://t.co/WwjdW0rPoL

Today, the president focused his six-minute address on the economy, welcoming the reopening of businesses in some states.

“The country is in a great place and it’s going to be greater than ever before,'”said Trump.

The president also said that the U.S. would now be sending its surplus ventilators to other countries, including Germany.

“We have tremendous capacity, now over-capacity of ventilators,” said Trump.

According to Worldometer, there are currently 777,243 active coronavirus cases in the US, with 36,148 cases having been detected in the past 24 hours.

US Food and Drug Administration commissioner Stephen Hahn then took over to talk about expanded coronavirus testing and treatment, as well as antibody testing. Hahn addressed concerns about some antibody tests being inaccurate, saying that these tests would not be put into place until they were proven safe and accurate.

Vice-President Mike Pence spoke for the remainder of the short press conference, offering a national overview as well as state-specific spotlights on progress made against the virus. Pence welcomed the use of websites to facilitate access to testing in both Iowa and Utah. He also praised a Missouri website highlighting those companies that are repurposing their manufacturing activities towards production of medical supplies.

But Twitter went wild ridiculing the president, who backed down on his  statements, calling them sarcastic.

We are still in the middle of a pandemic aren’t we? People are dying aren’t they?

The President’s team told him to brush it off as a joke?

Overburdened mothers in Pakistan are relieved as schools reopens

Back to school – COVID-19 style

The new normal for school life is abnormal in Michigan