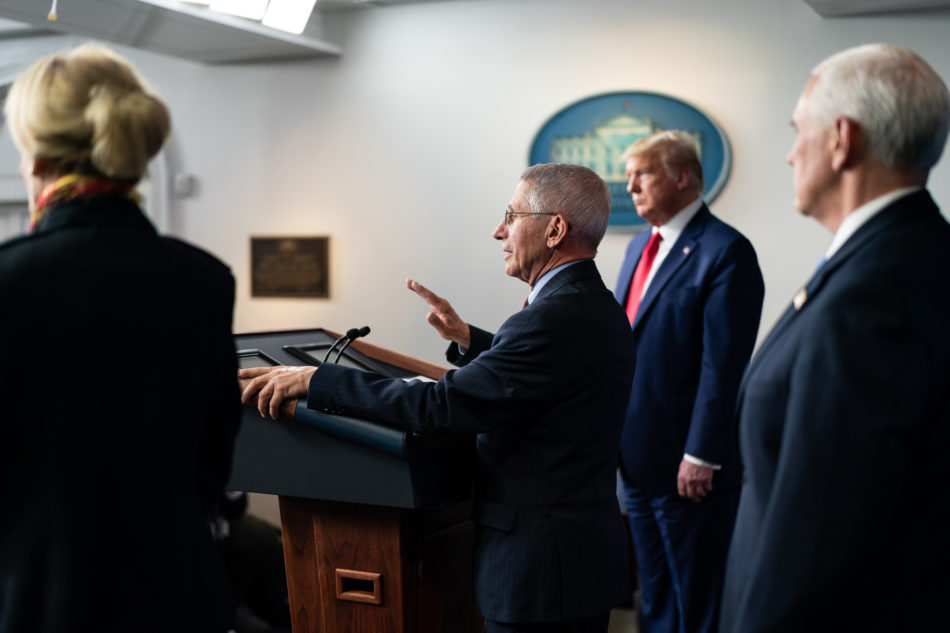 President Donald Trump today said he disagrees with Anthony Fauci’s comments that he’s “not overly confident” about the country’s testing capacity to effectively contain the spread of the novel coronavirus.

Trump said that he thinks the U.S. has done “a great job” testing for Covid-19, the disease caused by the virus, and claimed that the nation is more advanced than other counties.

Fauci, director of the National Institute of Allergy and Infectious Diseases, said in an interview with TIME published earlier today that the U.S. needs to “significantly ramp up” the number of tests and the capacity to perform them.

“I am not overly confident right now at all that we have what it takes to do that,” said Fauci, member of the White House coronavirus task force. “We are doing better, and I think we are going to get there, but we are not there yet,” he continued.”

Fauci was not present at today’s briefing.

The doctor’s statement contradicts the White House’s assurances on the country’s testing capabilities. The U.S. has performed over 4.6 million tests so far, lagging behind Italy in per capita tests conducted.

Fauci’s comments come as governors begin to relax containment measures to reopen their state’s economies despite warnings of a resulting surge in Covid-19 cases. In Georgia, Gov. Brian Kemp plans to restart the economy before the state’s shelter-in-place order is lifted on April 30 even though Trump yesterday said he “very strongly” disagreed with the move.

This evening, Trump reiterated he’s “not happy” with Kemp’s decision to reopen some nonessential businesses, such as fitness centers, hair and nail salons, and barbers.

The president said he may extend social distancing guidelines past May 1, but assured he thinks the worst will be over by early summer.

Bill Bryan, an undersecretary at the Homeland Security Department, said at the press briefing that the virus doesn’t last long when exposed to sunlight, according to experiments with coronavirus samples. He said solar light appears to have a powerful effect on killing the virus.

More than 21 percent of people tested in New York City for coronavirus antibodies this week were found to have them, New York Gov. Andrew Cuomo said earlier today.

The results are part of a statewide effort to test residents for antibodies, which indicate they have had the virus and recovered from it.

The state tested 3,000 random people across 19 counties, and nearly 14 percent of the results came back positive, according to preliminary data.

The numbers indicate that the actual number of coronavirus cases in the state may be much higher than the confirmed 260,000. If the preliminary results hold true, as many as 2.7 million New Yorkers, with more than 1.7 million people in the city,  may have been infected with the virus. It also means the mortality rate could be lower than previously thought.

“What we found so far is that the statewide number is 13.9 percent tested positive for having the antibodies,” Cuomo said during a press briefing. “They were infected three weeks ago, four weeks ago, five weeks ago, six weeks ago, but they had the virus, they developed the antibodies and they are now recovered.”

Before Cuomo’s briefing, Dr. Demetre C. Daskalakis, New York City’s top official for disease control, warned against using antibody tests to make decisions about social distancing and reopening the economy. The World Health Organization earlier this week cautioned that there’s no evidence to suggest that antibody tests can show that a person that had the virus is immune to reinfection.

During his presentation, Cuomo slammed Republican Sen. Mitch McConnel for suggesting that states hit hard by the virus should file for bankruptcy instead of seeking financial aid from the federal government.

“This is one of the really dumb ideas of all time,” said Cuomo, a Democrat.

Cuomo has criticized Congress and the federal government for not providing enough funding for states to cover the costs of battling the coronavirus.

The House of Representatives today passed a $484 billion coronavirus rescue package to aid small businesses and fund hospitals and testing.

The bill aims to replenish a small business loan program as unemployment soars during the crisis. The package allocates $321 billion for the Paycheck Protection Program, $60 billion in loans for small businesses, $75 billion in relief for hospitals and $25 billion for coronavirus testing.