Life in Canarsie on PAUSE 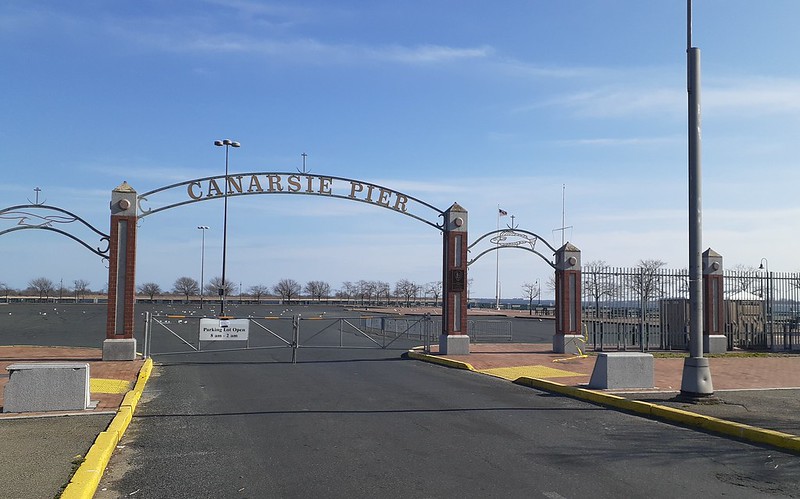 New York may be on PAUSE, but not much has changed in sleepy Canarsie as COVID-19 ravages New York City. A Sunday afternoon stroll in the east Brooklyn neighborhood by Jamaica Bay felt like a typical Sunday.

Cars zoomed by on the main streets of Remsen and Seaview Avenues by Canarsie Park while runners, dog-walkers and adults with biking/scooting children navigated the 132-acre green space.  A sunny but chilly day saw a light yet steady flow of casual walkers and couples entering and exiting the park’s many entrances, while over by a playground near 80th Street, a lone person jumped rope furiously – following a complex pattern of moves fit for a competition, or bypassers’ entertainment.

There was one person wearing a mask. A quick, sobering reminder that even this scenic, tree-lined suburb was not exempt from the pandemic that the coronavirus had unleashed on the world.

The quiet hush of Canarsie – everyone indoors, in their backyards/park or heading to their cars or bus – is the norm for those who live here. Gov. Cuomo’s recent Executive Order for New York State to PAUSE  (Policy that Assures Uniform Safety for Everyone) may already be in effect here, but life goes on.

New York City has become the epicenter of the ever-rippling spread of the virus as the numbers of infected persons jump with alarming consistency as testing for the disease increases. New York State now has almost 17,000 confirmed cases with close to 11,000 of those in New York City alone.

At its core, the PAUSE directive requires that all non-essential businesses must close as of today, Sunday, March 22 at 8 p.m, until further notice. Essential businesses include grocery stores, health and delivery services and gas stations. Social gatherings of any size are canceled or postponed.

One key provision of the mandate is to protect the vulnerable elderly population under the newly formed “Matilda’s Law” where  those 70 years or older are encouraged to take extra precautions in their day to day activities. The younger population is encouraged to stay away unless their presence is necessary to provide needed care.

Social-distancing, work-from-home, remote-classes, online-learning and essential food-delivery  have become the daily hyphenated words of use in just a brief two weeks since the virus threatened to upend New Yorkers’ lifestyles and livelihoods.

Over by the Canarsie Pier, a popular recreation area for cyclists and those who like to fish, small groups and individual riders rushed by, mask-free, not yet ready to give up their active lifestyles. The parking lot was closed, however, and rows of cars were seen lining the entrance to the pier with one couple seated on a bench overlooking the bay. 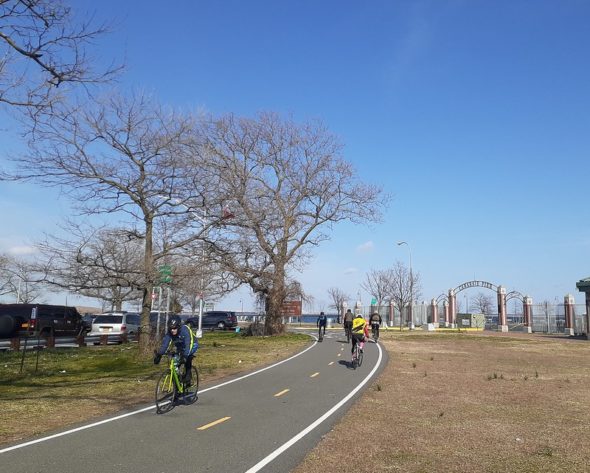 On entering the strip mall a block away from the water at Rockaway Pkwy, more signs of vigilance was evident as several people were seen wearing masks as they hurried in and out of restaurants to their cars. One shuttered restaurant had a small sign saying they were temporarily closed to keep themselves and their customers safe. 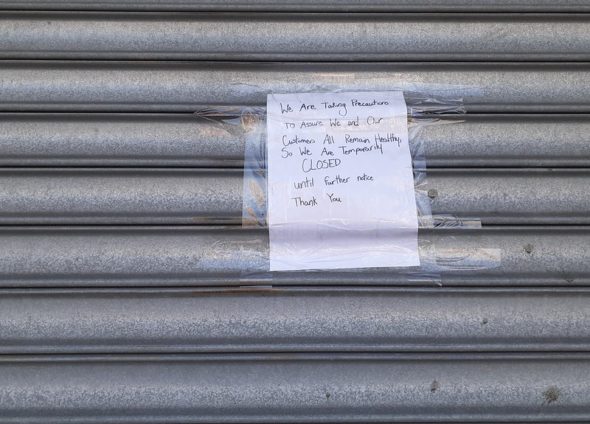 A restaurant on Rockaway Blvd in Canarsie is closed due to COVID-19. Photo by Karen Camela Watson

Several stores away, seeming oblivious to the social-distance mandate from Gov. Andrew Cuomo, a small group of mostly  men were seen gathered outside a Key Food supermarket – only one person wearing a mask – chatting and greeting customers as they entered or left the store with groceries.

It remains to be seen how this week and the remaining weeks, or months, of adjusted lifestyle changes will affect this already quiet and unassuming community. Both New York and the rest of the country continue to embark on the experiment of the century: to save our lives – and economy – quickly.