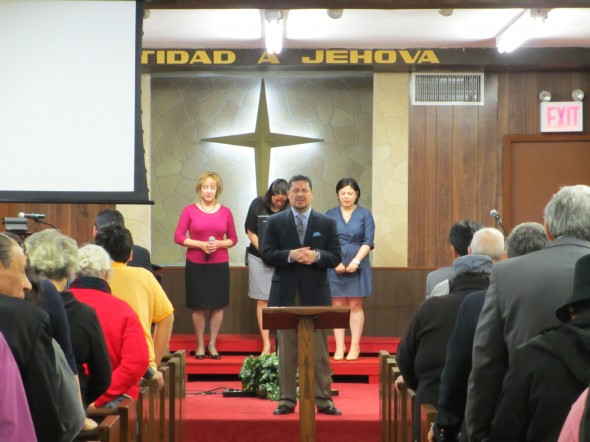 Pastor Michael Rivera is a registered Republican who hasn’t yet decided how he’ll vote on Nov. 6. As a Latino evangelical he has the difficult choice of voting in the best interest of most of his congregants or in line with his own closely held conservative convictions.

“The Latino evangelical has a major decision to make,” said the 34-year-old Rivera, who was born in Puerto Rico and leads the Spanish Evangelical Church in the East Village at 76 Second Avenue, an affiliate of the Christian and Missionary Alliance. Rivera, who lives in Ridgefield, N.J., has been the lead pastor there for a year and a half now, and before that served as the assistant pastor at this 62-year-old church for eight years.

As an evangelical, Rivera shares the GOP’s conservative values, he explained, including a strong opposition to abortion (though he cites differences within the party and evangelicals regarding circumstances such as rape) and the belief that marriage, a Biblical covenant, should be protected—between only a man and woman.

And yet, he said, “The Latino has another perspective, because he or she is a minority,” noting the number of social programs that matter greatly to Latinos in his congregation, such as welfare and food stamps. Republicans tend to minimize, oppose or ignore these as election issues. “It’s a Catch-22,” he said. “It’s very, very difficult. “

Felipe Narvaez, a 58-year-old member of Rivera’s church who lives on East 26th Street, is a native Puerto Rican who originally considered not voting in this election. Given that neither candidate shares Narvaez’s evangelical background, the decision for him was hard. Narvaez is a registered Democrat who said that after much prayer, he realized he needed to vote. Setting aside religion as a factor, he decided to vote for the sitting president.

“I don’t think four years was enough,” Narvaez said. “I feel, and I pray, that he’s going to move forward.” He also said that he looked favorably on President Barack Obama’s family-man image, as well as Michelle Obama’s involvement in her husband’s politics.

The choice was no struggle for another of Rivera’s church members, Edward Lopez. He is also a committed Latino evangelical (actually Palestinian and Mexican on his father’s side, Spanish and Puerto Rican on his mother’s) who is registered to vote as a Democrat. He feels certain Obama will win the election.

“I’ve asked God to give me answers, and my heart dictates that,” Lopez, a Bronx resident, said. “I believe it’s God’s will. I believe Obama is a tool for God’s will and for carrying out His prophecies.”

Lopez believes that the average income level in the Latino community accounts for this evangelical split. A September report by the U.S. Census Bureau found that one in four Latinos were living below the poverty line in 2011, and that the median annual household income for this demographic was $38,624. “There’s barely anybody that could be considered middle class in our congregation,” he said.

Pastor Rivera said another reason for the difference is that white evangelical voters tend to be less enamored of government-sponsored social programs. To be able to pull oneself up by the bootstraps with some government assistance comes harder for Latinos, he said.

“Being a minority, I feel that has a lot to do with it,” said Narvaez of the Latino evangelical tendency to vote Democratic. He explained that many Latinos, particularly the older or illiterate voters, would rather cast their vote for an African American than a white candidate. Narvaez worked in real estate before he became disabled.

As for Pastor Rivera, he does not preach politics when he stands in front of his congregation of 100 or so members seated in wooden pews with fleurs-de-lis carved into the backs of the benches. On Sunday meetings at 11:30 a.m., with a backlit, pointed cross behind him and above his head the words “SANTIDAD A JEHOVA,” or, in English, Holiness to the Lord, his sermons focus on the Bible. He will not even tell his congregants which candidate he plans to vote for when they come seeking his advice about the election. He tells them to vote based on who most closely represents their values. They must weigh the moral versus the societal issues.

Lopez, for his part, sees this presidential election as a choice between “the lesser of two evils.” As a 16-year veteran of Wall Street who worked in trading systems and technology, originally at Swiss Bank (now UBS), Lopez noted that economics and the deficit play as much a role in his considerations of the candidates as do the Bible and prophecies.

Pastor Rivera does not share the disdain for or discomfort with Romney’s Mormon faith that a number of white evangelical religious leaders, such as Internet evangelist Bill Keller,have publicly expressed. He said the Republican’s religious beliefs would have no influence on his decision in the voting booth. “He’s no more or less Christian than Obama,” he said, adding that he takes a more inward look at the person, rather than at the religion he might profess. And yet, he said, “I’m still at a conundrum, still torn.”