LAS VEGAS,NV – Arnold Loia’s house no longer feels like home. Pictures that once hung proudly on the wall lie en masse on the floor; the living room is a crude mosaic of drooping furniture, stacked chairs rubbing heels with end tables; and boxes with sharpie graffiti act as stunt doubles for the items within, haphazardly filling the void left behind in rooms across the house.

Instead, the space serves as a constant reminder of what Loia, 41, of Northwest Las Vegas, stands to lose: the plan for his family’s future, a place to raise his two young girls, and his dying dream of home ownership. 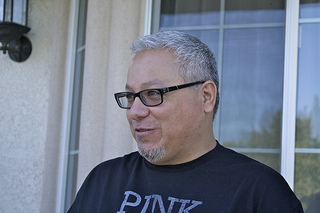 Arnold Loia, 41, of Northwest Las Vegas, Nevada chose to enter into a short sale after failed attempts at modifying his mortgage through Bank of America, and government programs. Photo by Eric Zerkel

Loia is one of the hundreds of thousands of Nevadans facing foreclosure, a key demographic of voters whose homes, credit, and financial stability hinge on access to key government programs targeted at alleviating the rigors of the foreclosure process, programs that could potentially hang in the balance of the upcoming election.

And within Nevada, no place was hit harder than Las Vegas. According to the federal housing finance agency, home values in the Las Vegas area are down 60% over the past 5 years, and continued to fall in the latest quarterly data.

“I know that we as homeowners are responsible, we made the choice to pay, but sometimes you need help,” said Loia.

“I didn’t qualify for any of the programs.”

Specifically, Loia didn’t qualify for programs made available under the Making Homes Affordable Act, (MHA) legislation passed under the Obama administration that aims to provide individuals with access to programs that can help restructure or modify mortgage payments to alleviate financial hardship, and in the process, save homes from going into foreclosure.

After 8 months of frustrating back and forths with Bank of America trying to get his mortgage payment modified, Loia succumbed to the process, and made the difficult decision to enter into a short sale, in which the bank agreed to sell the house for a potential loss, or deficiency, thereby releasing Loia of the mortgage.

“That was the hardest thing to do,” said Loia. “You love your home, and you don’t want to sell your home. You want your kids to grow up here,” Loia said, choking back tears.

Even though Loia didn’t qualify for any of the restructuring programs, his financial fate very much rests in the hands of the election. Under the The Mortgage Debt Relief Act of 2007, Loia can avoid paying taxes on the deficiency he accrues via the short sale by excluding the debt on his taxes.

However, the Act is set to expire on December 31st, 2012, creating even more uncertainty out of Loia’s situation.

“We’re leaving this house; we have to be out of here by December,” said Loia. “I’m hoping Obama will extend it just in case the house doesn’t sell by then.”

Despite not qualifying for the Obama administration’s programs, he still saw the programs as a step in the right direction, something he doesn’t think Mitt Romney would do should he take office.

“I don’t see it with Romney at all, said Loia. “I keep seeing that commercial where he [Romney] says, ‘let the foreclosure process go through,’ but if you’re not going through it you have no feelings for it.”

Unlike Loia, Cathy Martinez, 43, Southwest Las Vegas, was able to qualify for an older version of the Making Homes Affordable Act, and a little over a year ago lowered her mortgage payments by around $200, just enough to make ends meet. 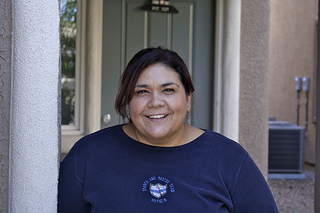 “I’m still glad I went through it, because it freed a couple hundred dollars a month for something else, but it was a frustrating process for what the outcome was,” said Martinez.

Martinez said that though she qualified for the old version of the Act, the latest version has more stringent requirements that have made it impossible for everyone she knows to receive aid.

“There are these programs out there, but for the average person are they truly helpful? I don’t think so,” said Martinez. “Things get put in place, and I think the intent is to help, but maybe the people who are making these decisions aren’t looking far enough to see how these acts aren’t helping the middle class.”

Like Loia, Martinez thinks that the MHA at least showed initiative on Obama’s part to help those struggling with foreclosure.

“Obama has tried to put some plans in place for homeowners, but maybe they need to look at them further to see what’s truly helping the middle class,” said Martinez.

“In all honesty, that’s where I’m putting my faith right now.”

But not all those who have gone through the foreclosure process think Obama provides the best option for Nevada homeowners.

Josh Leavitt, 38, had his central Las Vegas home foreclosed two years ago. Leavitt was working with US Bank, his lender, to modify his mortgage, when the bank sent him a letter notifying him that they were no longer working with him, and that he and his family had to move out immediately.

“They just pulled the rug out from under us,” said Leavitt.

Though Leavitt fell on financial hardship in part due to medical issues, he attributes a large share of the housing crisis to overbuying during the housing boom, the fallout in the local economy, and personal responsibility.

Leavitt said that Obama’s take on the economy and business does not fit with his own, and that Romney would provide the better option to set the economy on the right track and in turn, fix housing.

“I don’t like the idea of the government coming in and telling the bank you need to rewrite this mortgage for less than what you lent,” said Leavitt.

“I’d like to see a political push for growing the economy, because the economy is going to fix these problems. If the economy kept going the way it was before the crash, I’d still probably be in that house right now.”

Unlike the others, Lydia Murphy, 45, of Central Las Vegas lost more than just her home to the housing collapse, she lost out on investments too.

When the housing market crashed, Murphy could no longer afford to charge rent high enough to cover the cost of her two investment properties and they were foreclosed on. And, in turn, she lost the home she lived in.

“I put a lot of thought into spending money on investment properties, trying to build a future, and all of it was wiped out. I had no control, none.”

Because they were considered investment properties, Murphy’s mortgages automatically did not qualify for assistance. And like Leavitt, Murphy believes the economy and Romney are a better option than programs like MHA.

“I’m a Republican, and I voted for Romney,” said Murphy. “I think he has a better solution for the economy.”

Still, Murphy remains skeptical about the affect either candidate will have on Nevada and housing.

“We’re not anywhere close to being better,” said Murphy. “I don’t think anything good comes out of anybody’s mouth about trying to fix housing.”

Back at Loia’s home, the faint sounds of hammers and drills echo down the sidewalk of the neighborhood of Centennial Springs. The bare frames of unfinished homes jut out in rows, a by-product of investors snatching up cheap homes to rent out for a profit.

Loia dropped his head and closed his eyes, envisioning what it would be like to rent one of those houses just down the street from his current home.

“Yes, those are available for rent, but we don’t want to live in the same place where we see our home every day,” said Loia.

“Imagine driving by every day, and seeing the house you fought for, or staying here, and dealing with the desperation of when that notice is going to go on the door.”