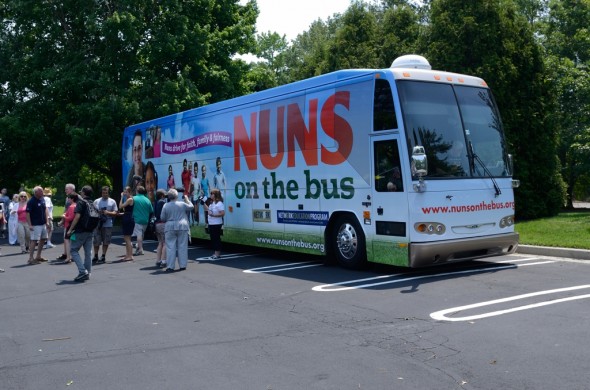 Catholic groups hope to exert an influence on voters and politicians ahead of Tuesday’s elections, but they find themselves at odds with other Catholic organizations as they struggle to determine how to turn church principles into policy.

Roman Catholics make up 23.9 percent of the population, according to a 2007 Pew Research poll. But, unlike Evangelical Protestants, who make up 26.3 percent and who strongly favor socially conservative policies, Catholics are spread across the political spectrum. Far from being a voting bloc in the Nov. 6 elections, they are sharply divided over abortion, contraception, same-sex marriage and poverty.

Both Vice President Joe Biden and the Republican aspirant, Paul Ryan, are Roman Catholics—a first time for a head-to-head at that level. But Ryan said during their one debate that his faith inspires his opposition to abortion while Biden, who supports abortion rights, said he objects to imposing religious beliefs on others.

The Catholic Association, based in Washington, D.C., gave Obama a failing grade on its Freedom of Religion scorecard, which measures how well a politician protects the association’s interpretation of religious values. The group gave his rival, Republican nominee Mitt Romney, an A-plus.

Ashley McGuire, a senior fellow at the association, said that “increasingly, there’s a notion that religion is something that should be private.” The group refers to Biden’s comment during the debate that he separates his policy-making from his faith.

The Catholic Association plans to circulate more than 500,000 of its scorecards in the battleground state of Ohio. It makes its voting guide available in both English and Spanish. According to a Gallup poll conducted in April, Hispanic Catholics support Obama by an overwhelming majority.

For the past decade, the Knights of Columbus has quietly worked to block same-sex marriage. The organization, which was founded in 1881 by Father Michael McGivney, the son of Irish immigrants, now includes 1.9 million members and is known for providing food and housing services to the poor, funded by donations and a top-rated life-insurance service.

According to tax returns for the Knights of Columbus, the organization has given more than $6 million since 2005 to groups seeking to ban same-sex marriage. This year, the Knights gave to such campaigns in all four states where an initiative on the matter is on the ballot, including donations of $250,000 each in Washington State and Maryland.
The Knights of Columbus did not reply to requests for an interview. It recently released a statement expressing support for “the bishops of the Catholic Church” and the church’s teaching on “moral issues.”

One of the flashpoints for Catholics concerns the contraception mandate that is part of Obama’s Affordable Care Act; the mandate requires that all health insurance plans cover preventive health services, including FDA-approved forms of birth control. Though the administration exempted religious organizations such as churches, a public spat ensued.
American bishops declared that the policy violates the “conscience rights” of Catholic-affiliated universities and hospitals. The bishops’ stance inspired grassroots organization as well. Catholics for Freedom of Religion, founded by Barbara Samuells and five other volunteers, opposes the mandate for the same reasons as The Catholic Association. Samuells says that mandating contraceptive coverage is not a compelling “government interest,” especially when birth control is available at clinics for “pennies.”

Both Catholics for Freedom of Religion and the Catholic Association opposed the president’s proposed compromise to exempt all religious organizations and non-profits but require insurance companies to pay for and absorb the costs of providing contraception.

The Nuns on the Bus see these issues as secondary, even contrary to the mission of the church. A coalition of sisterly orders, the Nuns on the Bus made waves with a nine-state tour this summer highlighting social justice issues and protesting the budget cuts proposed by Ryan. When the nuns reached Marietta, Ohio, they faced a protest themselves from the Marietta 9-12 Project, a Tea Party-like group inspired by television personality Glenn Beck.

The protesters held signs supporting Romney and Ryan and attacking abortion, which the sisters do not explicitly oppose. 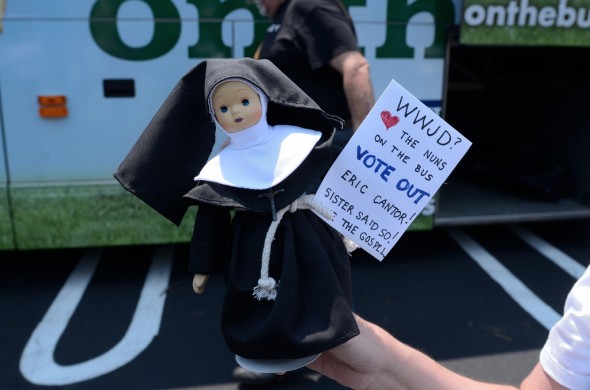 The sisters see cuts to programs for the poor and working classes in the Republicans’ budget as crises of justice. They consider the Obama White House an ally. Network, the group that runs Nuns on the Bus, compiled policy proposals for the transition documents when Obama was newly elected. Network was also a vocal supporter of the Affordable Care Act.

Sister Marge Clark, Network’s lobbyist for domestic human needs, says that “the underlying federal budget should be formed on the needs of the people” because the United States has a responsibility to focus on poverty.

But the Vatican wants the nuns to keep their noses out of the books. Earlier this year, the church’s Congregation for the Doctrine of the Faith rebuked Network for being “silent” on the issues of gay marriage and abortion.
The United States Conference of Catholic Bishops takes the same position as Network on poverty, saying in a letter to the House of Representatives that the House budget failed to “protect and not undermine the needs of poor and vulnerable people.”

But the church has not taken a stance against the Romney/Ryan ticket. Ryan says his budget is guided by “the church’s social teaching.” Archbishop of New York, Cardinal Timothy Dolan, president of the bishops’ conference, calls Ryan a “great public servant.”

But Ryan’s plan to convert food stamps and Medicaid to block grants and to slash funding will certainly affect the poor. If he’s serious that his budget is in line with the church’s teaching to help the needy, Ryan is putting a great deal of faith in the private sector to step in and provide for America’s most vulnerable.