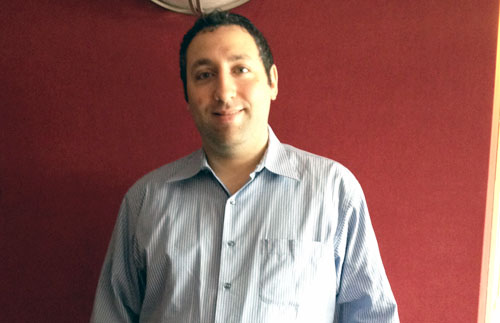 Joseph Hayon is the president of the Brooklyn Tea Party. Photo by Renee Jacques

Joseph Hayon is about ready to move his family to another country. If Obama gets reelected he is convinced there will be another four years of what he sees as the destruction of America. Hayon sits in a run-down building in the Midwood section of Brooklyn hastily apologizing for being an hour late to our appointment. He was meeting with a potential donor because not only is Hayon the president of the Brooklyn Tea Party, he is also running for the New York State Assembly.

Remember when everyone was making a big fuss about the Tea Party back in 2009?  After Obama took office, the group staged dramatic protests in D.C. fervently chanting that they wanted “their” America back and fiercely opposing any government regulation on their lives—including Obama’s healthcare bill and what they view as excessive and interfering taxes on the American people.

Most of America thought they were whack-jobs, with their extremist views and outrageous claims (some keep trying to press the point that Obama forged his birth certificate and that he holds radical Muslim views). The group is named after the iconic American movement in Boston that actually made a lot of sense. But today, the people in the Tea Party frequently spiral into inane tirades that baffle the American public. They often get shooed away as over-zealous radical thinkers who are labeled as just plain weird.

The first thing that Joseph Hayon wants to get out of the way about the Brooklyn Tea Party is that his group is different. “We’re practical,” says Hayon calmly.  He’s a 34 year-old Jewish guy wearing a suit and he has two kids and a loving wife. He works as a bookkeeper and is also studying accounting at Brooklyn College. His main concern is religious freedom and whether the government is spending the citizens’ money wisely.

But above all, what Hayon says that he cares about is a better life for his kids. His three kids are prominently featured on both of his campaign cards and when I receive emails from him his name is listed as “Homework Helper.”

“Everything is for children,” he says. “If we owe sixteen trillion dollars, our children have to pay for that.” If elected to the State Assembly, Hayon said his priorities are to repeal gay marriage and to change the way New York runs its education system by switching to educational vouchers.

“The voucher would come from the government,” he says. “I have three kids, so the government comes and says, ‘One voucher for each kid. Take the voucher and go to any school you want. It doesn’t matter if its a religious school or a private school, a public school, a charter school, go and use it any way you want.’ Something like that would save the education crisis that goes on in the black communities, the Jewish communities and the Catholic communities. The low income and religious communities will benefit greatly by having educational vouchers.”

One thing that Hayon wants to make clear: the Brooklyn Tea Party does not like Mitt Romney. Hayon says he and his colleagues think that Romney is just the lesser of two evils. “We are not excited about Mitt Romney but we are strongly opposed to Barack Obama and so Romney wins our endorsement by default, okay?” says Hayon with a sense of urgency. “But, ideally, the Brooklyn Tea Party preferred other candidates like Herman Cain and Rick Santorum. I was a presidential delegate for Santorum.”

Hayon is extremely passionate about politics for someone who only voted for the first time when he was thirty. “I did not care about politics,” he says. “No candidate reached out to me. Nobody ever gave me a reason to vote.” Apparently Anthony Weiner  (the congressman who made a name for himself notably for his “sexting” scandal) forced Hayon to change his mind. “I received a phone call from Anthony Weiner,” Hayon says. “His position against school vouchers was frustrating, primarily because he represented a large amount of Orthodox Jews and Catholics.”

Hayon ran unsuccessfully for the Assembly two years ago and has scarcely updated his website.  “What’s the point?” he says. “My positions remain the same.” The site opens with a letter to his supporters expressing his feelings about his loss and emphasizing in bold that his sole purpose is to “protect our children.” He claims on his website is that it was truly an “act of God” that he lost with 43 percent of the votes and only spent $615.

He gladly broke down how he managed to be so frugal. He spewed out different price points and numbers about how he saved money by splitting the cost of the cards with someone who was running for Senate and it ended up being a really good deal. But this year, he’s trying to raise more money.

He has changed his slogan from “Our Children Are Our Future” to “Uniting Communities for Our Children.” This is deliberate. He needs to gain approval from all the different sub-groups in Brooklyn (the Hispanics, the African-Americans, the Haitians, etc) in order to beat Helene Weinstein. He is trying to paint Weinstein as someone who wants to abolish religious freedom. She voted for the gay marriage law and Hayon wants everyone to know that he will fight repealed on behalf of every religious person in Brooklyn, regardless of what God they pray to.

“It’s a pivotal issue in the Orthodox Jewish community,” he says. “We have a lot of Caribbean people in Brooklyn, African-Americans, and Haitians. We are against gay marriage.”

In a recent interview with “The Atlantic”, New York Mayor Michael Bloomberg said, “The Tea Party is a manifestation of frustration. They don’t want it. What is ‘it?’ They don’t know what ‘it’ is, there’s just a general feeling that society is not going in the right direction.”

When confronted with the hypothetical—yet very real—possibility that Obama might be re-elected, Hayon gasps. “Oh my God,” he says. “My family will have to move. All these regulations just take away religious freedom. Those who are strong will move and those who are weak will stay and not be religious anymore.”

His faith holds his life and his family together. He gleams when he talks about his children, taking pride in the fact that they are well behaved and already religiously devoted. His six-year old son speaks English and Hebrew fluently and his four-year-old always sits quietly during the two long hours every Saturday that Hayon takes them to synagogue. His 20-month-year-old baby even hands Hayon his yarmulke every morning.

Where he would take his family if America fails him once and for all?

“Israel is definitely an option,” he answers as if he has given this question serious prolonged thought.