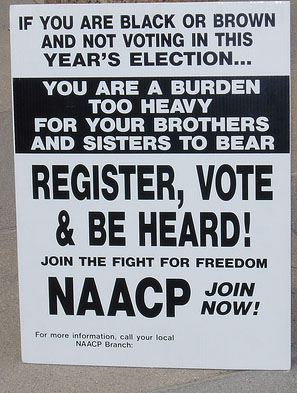 Some African-American voters feel they are under pressure in the Nov. 6 elections, whether it is pressure to back President Barack Obama, criticism about blacks voting by race or difficulty registering to vote because of new restrictions in a number of states or lack of citizenship.

Wanda Ward wants to be clear that she supports Obama not because he’s black and she’s black, but because she likes his character and his policies.

When Obama won the presidency in 2008, 96 percent of black voters cast their ballots for him, according to the Pew Research Center. Black Americans constitute 14 percent of the U.S. population, and 76 percent of them identify as Democrats, Pew reports.

The Joint Center for Political and Economic Studies reported that the majority of black voters have supported Democrats for president since the mid-1960s, when President Lyndon Johnson, a Democrat, oversaw passage of the Civil Rights Act and the Voting Rights Act to end racial discrimination. Black voters are expected to support Obama this year, in the race against Republican nominee Mitt Romney, by a margin of 97 to 3 percent.

The Pew Research Center reports that African-Americans made up 12.1 percent of the 131 million Americans who voted in 2008.

“Everyone expects black people to vote for Obama because we’re black,” said Ward, a black community member and graphic arts designer. “People think that people stick with their race, that’s the American way, people stick to themselves.

“I know black people who aren’t voting for Obama or don’t care for Obama. Honestly, I think that what gives him such clout is that he is an upstanding member of our community, he’s pretty clean cut, and also he’s down to earth, not white washed,” she said, adding that Obama’s marriage to a black woman, and his involvement with their two daughters, “gives us as minorities something to relate to, but that’s not why we’re voting; it’s just nice to see.”

Chris Hayes, host of the MSNBC opinion show “Up with Chris Hayes,” said on television that the claim that blacks vote by race more than other groups is ridiculous.

Still, some African American voters feel pressure to conform. Lisa Bayard, 22, a black woman and Obama supporter from Philadelphia, says the pressure started as the election heated up.

“All year around people barely care what’s going on but, come election time, black folks start antagonizing you on your beliefs and values and, if you don’t do this or vote for that, your community will suffer,” she said. “It’s just a major controversy.”

NBC News reported that about one in eight African Americans would be unable to vote because of these changes.

Although courts have barred several states from implementing the laws during this election, the restrictions may still have an impact.

Minority empowerment groups have reacted to these new restrictions by criticizing measures they believe will repress voting by minority groups, especially African-Americans. The NAACP held a meeting in Geneva, Switzerland to try to raise international awareness of these issues.

“In the past year, more states in this country have passed more laws pushing more voters out of the ballot box than at any point since the dawn of Jim Crow,” NAACP president and CEO Benjamin Todd Jealous told the meeting, referring to the racial segregation laws in the South that were overturned in the 1960s.

Even without the changes in registration, some African-Americans would be left out of the balloting. Immigrants from Africa totaled 1.6 million in 2010, 4.6 percent of those immigrants are naturalized U.S. citizens, and immigrants from all lands account for 6.5 percent of voters, according to the Immigration Policy Center.

Salef Abou, a new citizen from the West African country of Mali, has not registered to vote and said he doesn’t understand how the American political system works.

“In Mali, we use the French political system. We have assemblies,” Abou, a student at LaGuardia Community College, said in French. “This Congress—Senate system I know nothing about.” If he were to vote, he said that Obama would be his choice.

“I’m voting for Obama because he’s more in touch with the middle class, [which I] would definitely consider myself a member,” he said.

Modest Akre an African immigrant from Burkina Faso, who has permanent resident status, has been working in this country for over three years but does not have citizenship or the right to vote.

“I would like to vote,” he said in French. “I pay many taxes each year, but I have no rights to say what I think about how this country is run. It’s the same in many other countries, so I just accept it.”

For many black Americans and immigrants from Africa, the 2012 elections are a time to reflect on what it really means to have a voice and to vote. For Diop, it means thinking about his parents.

“My mom works at a restaurant and my dad as a taxi driver,” he said. “Both of them pay taxes but neither of them can vote.”