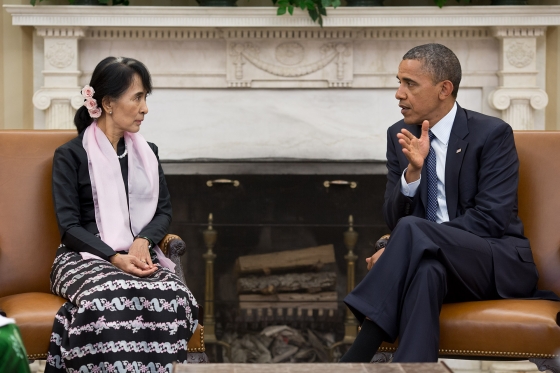 The iconic candidates ran on platforms of hope. They both nabbed landmark victories while challenging the conscience of a generation. And, whether they delivered speeches on the Columbia University campus or in Indiana towns, both Nobel Peace Prize recipients drew crowds of supporters.

The meeting of Burma’s former dissident Daw Aung San Suu Kyi and President Barack Obama at the White House in September marked a success in U.S. foreign policy, but one that has been overshadowed by Middle East crises during the election campaign.

The U.S. played a key role in imposing international sanctions on the military rulers of Burma, also known as Myanmar, and in pressing for democratic reform. The pressure eventually led to the creation of a civilian government in 2011 and the election of Aung San Suu Kyi to Burma’s lower parliament last April.

That success did not come up in presidential debates between Obama and Republican nominee Mitt Romney, a lost opportunity to show voters that a human rights approach to foreign policy worked on a
country once known for its repressive, military regime.

The issue is very much on the minds of Burmese Americans, human rights activists and foreign policy analysts, although there is little consensus among them on the lasting effects of the U.S. push for democracy.

Political changes continue to sweep Burma, but reports of violence in the border regions now raise questions about the country’s ability to implement principled reform. Even Aung San Suu Kyi, often touted as the Nelson Mandela of this decade, weathered recent criticism for remaining silent on ethnic clashes in the borderlands as she cooperates with her government.

The stymied progress has produced mixed feelings among Burmese Americans as they prepare to vote in the U.S. elections on Nov. 6. Zaw Zaw, a Burmese American and program coordinator at the Soros Foundation in New York, praised the Obama administration for significant strides on Burma but also credited Congressional Republicans for stepping up pressure on Burma and paving the way.

“Obama and (Hillary) Clinton need to listen. The Burmese army is still waging a civil war against the ethnic Kachin in the north,” he said.

Dr. Nawmai Maran, a Kachin American physician in Coney Island, believes the Burmese army is guilty of ongoing sexual violence, looting of villages and creating a “climate of fear and suffering” for Burma’s minorities, despite a 1994 cease-fire agreement. A spokesman for Kachin Alliance USA, Maran recently signed a letter of petition to Aung San Suu Kyi, urging her to address continued human rights violations.

“Aung San Suu Kyi is in many ways a puppet of the previous,military regime,” Maran said in a phone interview. “The fighting for the Kachin land represents the fight for real democracy in Burma.”

“This is why in the upcoming election, we want a Romney or a Republican administration that will stand up for a genuine, democratic Burma.”

Kachin Americans number 3,000, a small portion of a Burmese American population of 100,200 that is concentrated in New York, California, Indiana and Kentucky. In Burma, the Kachin ethnic minority numbers 1.2 million out of 54 million people.

Htet Gyaw, a Burmese American independent filmmaker in Ithaca, New York, disagreed with Maran, saying that Obama’s foreign policy appeals to Burmese in America. This, Gyaw said, should translate into votes when the Burmese American community goes to the polls.

“I would say most Burmese lean toward Obama and the Democratic party,” he said. “Obama has left a positive impression. He eased sanctions and desires to do business there.”

“I’m not too familiar with Romney,” Gyaw added. “But he has been reported to outsource work to Burma to make Olympic uniforms.”

The manufacturing of uniforms and other forms of factory outsourcing, though, are not the only foreign investment seeping into Burma, a young, resource-rich country with proved reserves of oil and natural gas. Devin Stewart, a senior fellow at the Carnegie Council in New York who recently made a research trip to Burma, noted rapid progress as well as uncertainty there.

“Big multinational companies are going in to invest and (to) train workers,” he said, adding that many Burmese say the key to prosperity and wealth is to “be friends with the United States” and open their country to American investment.

According to the Asian Development Bank, Burma’s growth rate is expected to increase to 6.3 percent this year, up from 5.5 percent in 2011. The data suggest a promising start for a country finally registering the pace of growth seen in neighboring Southeast Asian nations.

“And yet the situation is extremely fragile,” Stewart said, referring to the tenuous nature of Burmese political stability. “I liken it to a spider web held by three strands: Aung San Suu Kyi, President Thein Sein and Burma’s speaker of Parliament, Shwe Mann. Progress in Burma hangs on the health, action and cooperation of these three people.”

The U.S. is in the process of lifting trade sanctions against Burma and appointing the first U.S. ambassador to the country since 1990 – actions that influence Burmese decisions and the delicate balance of its domestic politics.
Nien Su, staff director on the House Committee on Foreign Affairs in Washington, summarized the changing tides of U.S.-Burma relations as a rare triumph of bipartisan cooperation, and not just a victory for Obama.

“Many people forget Burma has been trying to improve relations with the West for some time,” Su said. Su and his staff are credited with helping to pass bipartisan legislation to award the Congressional Gold Medal to Aung San Suu Kyi.

“It was the combined efforts of Democrats and Republicans, and the pressure Congress exerted on the (Burmese) military junta that slowly and gradually gave way to a civilian government.”

Burma’s promise, though, like the electoral prospects of the two Nobel laureates, still hangs in the balance. And like the fate of both Obama and Aung San Suu Kyi, in many ways Burma’s future now rests in the hands of willing voters on both sides of the Pacific.