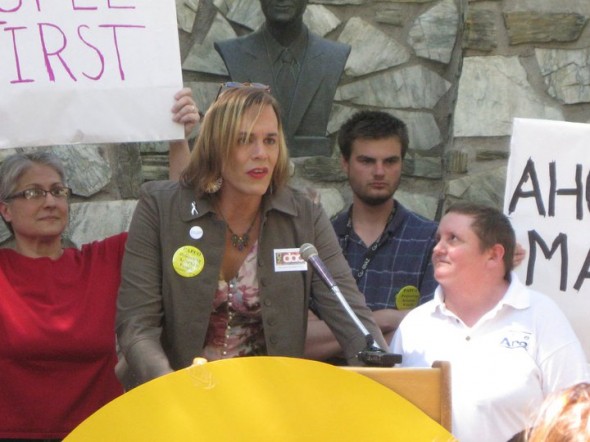 Claire Swinford, the director of Trans Haven, speaks at a rally at the Arizona State Capitol in Phoenix. Photo courtesy of Claire Swinford.

Claire Swinford, 41, was living in Tucson, Ariz. when she went to her designated polling location at a nearby church to vote in local elections in 2010. Swinford, a transgender woman, was in the early stages of her gender transition, and her driver’s license still bore a male gender marker.

“The poll worker said, ‘This is not you,’” said Swinford. “Of course I protested that and said it was.”

Eventually she spoke with the poll supervisor and finally the Pima County Elections Department, before the poll worker allowed her to vote.

“That was a very embarrassing experience for me,” she said. “In retrospect, it is very worrisome to me because it is an embarrassing, difficult experience a lot of people would walk away from.”

A recent study released by the Williams Institute warned of potential disenfranchisement that could occur for at least 25,000 transgender voters in states with strict photo identification requirements, including Georgia, Indiana, Kansas, Mississippi, South Carolina, Pennsylvania, Tennessee, Texas, and Wisconsin.

According to the report, 41 percent of transgender people did not have an updated driver’s license, which, depending on the state, may require a transgender person to show proof of having undergone sex reassignment surgery.

“Our main concern for trans people is the gender marker,” said Marisa Richmond, the President of the Transgender Political Coalition based out of Nashville, Tenn. who battled the state’s recently enshrined voter ID law for years.

“Although people can change the gender on their driver’s licenses, there is a surgical requirement,” said Richmond. “We’re particularly worried about the impact of that on people in the rural part of the state.”

Many trans activists view such surgical standards as antiquated and imposing medical procedures on people who may not want them, let alone be able to afford them.

“Most transgender people do not want sex reassignment surgery,” said Pauline Park, the chair of the New York Association for Gender Rights Advocacy and president of the board of directors of Queens Pride House. “Most who do want it cannot get it.”

Additionally, guidelines for sex reassignment surgeries can differ from state to state and the medical requirements can be vague, varying also on whether the person is transitioning from male to female or female to male.

Even in those states without strict photo identification, transgender voters face bias and disenfranchisement—often because of discrepancies in name.

“It’s very narrowly construed,” said Dr. Jody Herman, the author of the Williams Institute report. “It’s an underestimate of what could happen. I had to limit my analysis to IDs that had a gender marker. We didn’t have name change to look at.”

Kit Yan, 28, a slam poet living in Brooklyn said he continually faced bias at the polling booth in Prospect Heights, even though New York does not require a photo ID in order to vote.

“The poll worker did not believe that the name was not mine and made a scene out of it,” said Yan.

“It felt pretty humiliating at the time,” said Yan. “It was disruptive to the voting process for everybody else there at the time.”

Voting is just one part of a complex network of bureaucratic and legal issues that transgender people face when trying to change their name or gender on required identification documents.

“It’s complicated in this country because we have a very decentralized system of governance operating on the local, state, and federal levels with multiple agencies,” said Park.

In order to change their name or gender marker on documents, transgender people must to go to different government agencies, such as the DMV, the Passport Bureau, the U.S. Post Office, and others in order to make the required changes.

“In the state of New York, there are judges who will say you have to come back with sex change proof for name change, but there is nothing in New York State or City law that prevents someone from changing their name,” said Park. “You can change your name to an absurd one like Napoleon Bonaparte.”

Often, local officials are the ones who exercise discretion in bureaucratic matters.

“ID is extraordinarily arbitrary,” said Park. “It’s about who you encounter at the DMV or the judge.”

In an effort to raise awareness among transgender voters and poll workers, the National Center for Transgender Equality launched an initiative called “Voting While Trans.”

“We started to understand that people did not understand the nature of the challenge,” said Mara Keisling, the Executive Director of the National Center for Transgender Equality. “We wanted to make sure people really understood what could happen.”

“Anytime you have a societal or civic function that requires identification it’s going to disproportionately affect trans people,” said Keisling.

Due to the highly personal nature of the interaction between a poll worker and voter, many advocates, including the NCTE, are attempting to educate poll workers.

Swinford, who now lives in Missouri where she is the Director of Trans Haven, a trans advocacy group based in St. Louis, tried to get her organization to be a part of a local training for poll workers. Even though they were denied for scheduling reasons, she also has encouraged transgender people to become volunteers at the polls themselves.

“By having volunteers as the poll workers there’s kind of an informal training process, we believe that will help,” she said.

Many transgender rights advocates like Swinford believe that it is lack of understanding rather than ill will that underlies these interactions.

“I really don’t think that poll worker was being malicious,” she said referring to her experience in Tucson. “I think there’s a lack of training on gender identity. There are ways directly and indirectly we can build that awareness.”