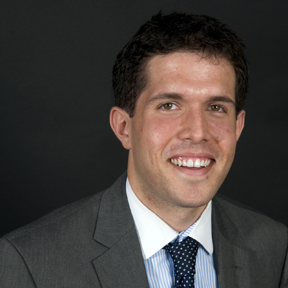 Burns landed at Politico right after graduation from Harvard. The Bronx native started working during the 2008 general election and has been blogging for the website since 2011. When Burns started, there were about 40 to 50 people in the main newsroom, headquartered in Washington, D.C. Now, the website’s staff has since grown to about 200.

Currently, Burns is the co-blogger for Burns & Haberman, one of seven Politico blogs that focusing on the upcoming general election. His co-blogger, Maggie Haberman, is a senior Politico writer. The two recently chatted about the role of social media in the presidential campaign Social media, Burns believes, changes the way politics is perceived and exposed in terms of how campaigns reach out to their audiences.

“Social media gives campaigns inspiration they need to have voters and the information they’re getting,” he said. “It also creates a lot of uncertainty because when you look at a site like Twitter or Facebook it’s easy to overestimate any given storyline.”

Social media, though an asset to campaigns and politics, makes it difficult to figure out what actually is penetrating the larger world of people, most of who aren’t politically active, he added.

Burns works in a field where competition is one of a journalist’s main priorities – to get the news out first, to get the news out most creatively, to take the angle that no other outlet has taken. One of Burns stronger suits about his writing, he said, is his ability not to over interpret any given event in the campaign.

“There’s always going to be that contest to be the first to say the new big thought, provocative thing, and I think we live in a world where every political reporter follows every other political reporter so you’re aware of what everybody else is saying. That you wish ‘I said it first,’ I think it all gets exaggerated.”

Another way Burns said he looks at his fellow political writers is through the different outlets through which writers are published.

“One of the nice things about working for a place like Politico is it covers government and policy exclusively through a Washington lens,” he said. “I have a different set of competitive pressures than people at the Wall Street Journal or Washington Post where you’re only one of several coverage areas competing for attention within your own paper. The fact that I’m covering the election in Politico’s newsroom means that if I write something that’s relatively smart it’s going to be appreciated, so the pressure I feel is mostly in terms of wanting to push myself.”

Since Haberman lives in Brooklyn and Burns in Washington, Haberman said the two worked out a schedule very early on. “Alex handles the mornings and I handle the nights because I have three kids,” she said. “But we talk throughout the day, we email throughout the day. If one of us spots something we give the other one a head’s up. He’s a genius. He’s terrific and he’s incredibly smart.”

The two develop story ideas together a lot, according to Haberman, who also said the blog has been a product of a running political conversation the two have had since last year.

Burns has already seemed to impress those who’ve worked around him and more specifically, with him. “He is wise well beyond his years,” Haberman said of her co-blogger.

As for his future after Election Day, Burns said, everything remains uncertain. “I think it’s become a blog about national politics but what that means for the future I don’t know,” he said.

One thing that seems clearer to him is his future in journalism.

“I’m 26, so I have some decisions to make about whether I want to be a political journalist for life,” he said. “Is this something I want to do for a while and try something else? I think I would be interested in covering any number of areas.”

There is one certainty – Burns said he is definitely bought in to the field at this point. “I came to journalism by way of politics but now I’m in journalism and I could be taking that in a range of directions. Foreign policy would be interesting in exploring,” he said.

But with the world of blogging and social media, the future of writing or how people receive their news may drastically change by the next general election. Burns may have a new Internet outlet on which to share his scientifically calculated (bleep … blorp) election results.

“I think it’s hard to say whether I’ll be doing this in four years,” Burns said about blogging. “The industry is changing too fast to say. I am very optimistic that there’s always going to be a market for high quality info presented in a literate, compelling way and I think it’s something I’d like to continue to be part of.”