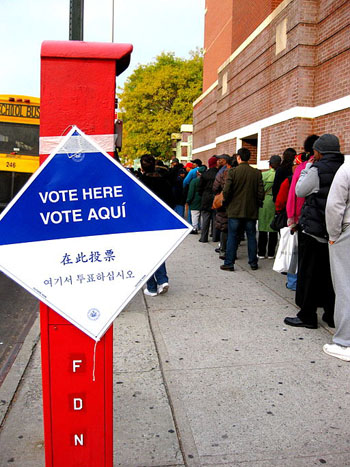 Avoiding long lines at the polls is one factor that affects student’s decision of where and how to vote.. Photo courtesy of Wikipedia.

Kate Locke has had to make two choices in the Nov. 6 presidential election: between President Barack Obama and Republican nominee Mitt Romney, and between North Carolina and Colorado.

Locke, 24, one of thousands of university students who attend schools outside their home states, has the right to register to vote in either state, according to a Supreme Court ruling.

Of the 12.9 million full-time students pursuing secondary degrees, the Department of Education estimates that approximately 13.7 percent, or about 1.8 million students, attend schools outside their home states.

North Carolina is where Locke grew up, but she attends the University of Denver in Colorado, which is considered a battleground state in the tight competition for Electoral College votes. She has an opportunity to decide how to make her vote most effective.

Of course, some students may not be aware of the Supreme Court ruling of 1979, in Symm v. United States, that students cannot be subjected to any voter registration requirements beyond those required of other residents. That decision affirmed the right of students to vote in either their home or their school state.

For students pondering where their votes could have the most impact, groups such as Count More may help. The Count More website asks students to list their school state and their home state. It then uses algorithms and information from Nate Silver’s FiveThirtyEight column in the New York Times to provide information about the 2008 election results in both states, the 2012 voter registration deadlines and a recommendation on where to vote, regardless of political allegiance.

Malini Runnells, 22, said she decided to vote in her home state of Virginia “since it is a battleground state and my current residency in Massachusetts has been solidified as a ‘blue’ state.”

For some students, however, practicality may be a bigger factor than politics in making the decision. They may find it difficult to get to the polls, worry over an absentee ballot not arriving, not want to change registration or miss a deadline.

“I realized I was running out of time to sign up for an absentee ballot when someone in a parking lot offered to register me in PA,” Barbic said, “I just wanted to make sure I would register on time, so I took the opportunity. I also prefer the experience of voting in a precinct versus filling out a ballot in the mail.”

Even those students who succeed in registering on time may have trouble voting in states that have instituted new regulations requiring state-issued identification documents. School IDs may not count.

The Brennan Center for Justice, at New York University’s School of Law, is one of several institutions that pay special attention to the voting rights of students. In a September press release, the Brennan Center asserted that, since the 2008 election, 19 states have increased voting restrictions in various forms by minimizing early voting, setting stringent residency requirements or requiring IDs.

Court rulings in a number of states have set aside restrictions, at least for the 2012 elections. Sixteen states will require non-photo identification, but only students in Tennessee, Georgia, Indiana and Kansas need worry about strict photo ID requirements this year.

Even without such requirements, the turnout among young voters is usually modest. The most recent Gallup poll of young voters found that only 58 percent of those aged 18-29 said they would vote on Nov. 6, a 20 point drop from the unusually high turnout for young voters in the 2008 election.

In the battle of home-state versus school-state for the 2012 election, students have had to add voter identification and other restrictions to the list of items to be considered.