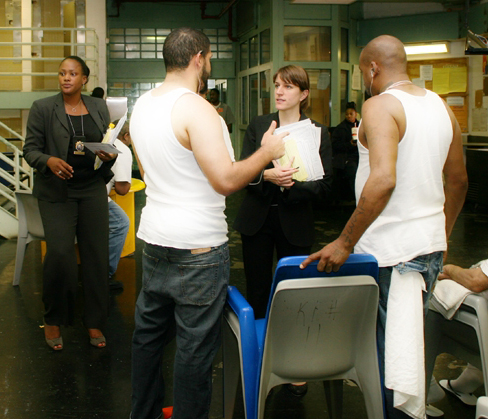 Glenn Martin lost the right to vote when he went to prison for six years for a felony. Under New York State law, he regained that right once he finished parole. But the Board of Elections turned him away in 2004.

Across the country, 5.8 million felons and ex-felons will be barred from voting in the Nov. 6 elections, and African Americans make up 38 percent of the disenfranchised, according to the Sentencing Project, an advocacy group. The US Elections project estimates that 219 million Americans are eligible to vote in the election.

Disenfranchisement of felons is a polarizing issue, especially in an election year. Some advocates for the rights of ex-offenders say Republicans block those rights because they think ex-felons would vote Democratic. But opponents of enfranchisement say letting ex-offenders vote would undermine democracy.

Four states (Iowa, Florida, Kentucky and Virginia) deny the right to vote not only to those in prison but also to those who have completed parole. New York is one of 41 states where the law enables ex-offenders to regain their voting rights. But these rights can be difficult to exercise.

Martin, now vice-president of development and public affairs at the Fortune Society, a prisoner reentry program based in New York City, says that denying ex-offenders the right to vote makes it harder for them to reintegrate in society.

“There is no better way to have people end up reoffending than (to) have them feel alienated from the rest of society,” he said. “Taking away people’s voting rights and keeping them from the polls is just another way of having folks with criminal records feel marginalized. We should be doing more to have them become part of the fabric of the community. Denying them the right to vote or creating huge hurdles for them to get over just exacerbates the problem of recidivism.”

In New York State, felons cannot vote while in prison or on probation. People convicted of misdemeanors and those who have completed probation are allowed to vote, according to the Brennan Center for Justice at New York University.

Martin said that most people do not understand the nuances of New York’s law on regaining voting rights. The result, he added, is a policy with “such a chilling effect that hundreds of thousands of people end up disenfranchised even if they aren’t disenfranchised by the law.”

Roger Clegg is a staunch opponent of enfranchisement even for those who have completed their sentences. As president of the conservative think-tank, Center for Equal Opportunity, based in Virginia, he says granting the right to vote to felons or ex-felons is not fair to the rest of society because those people have shown themselves to be irresponsible.

“We don’t let children vote, we don’t let non-citizens vote, we don’t let people who are mentally incompetent vote and we don’t let criminals vote,” Clegg said. “The common denominator there is that we have certain minimum objective standards of responsibility and commitment to the law and trustworthiness before we allow people to participate in a solemn enterprise of self-government, and people who have committed serious crimes against their fellow citizens don’t meet those minimum objective standards.”

Burt Neuborne, founding legal director at the Brennan Center for Justice, has been fighting against felony disenfranchisement for 15 years. He says opponents of voting rights for ex-felons are driven by political motives.

“The real reason that the opponents don’t want them to vote is that the opponents are almost all Republicans and they see this as a potential Democratic vote base,” Neuborne said. “It’s no coincidence that it is Virginia and Florida where the fight is going on the most. Both of those are very closely divided swing states, where the introduction of another 25,000 Democratic votes could swing the state.”

Clegg says that his position on felon disenfranchisement is non-partisan.

“I don’t know very much about the partisan impact of felon disenfranchisement because it doesn’t really matter. It shouldn’t be part of the equation one way or the other,” Clegg said. “I don’t deny that allowing felons to vote could change the election outcomes. Obviously, felons tend to vote for one party rather then the other and then of course there is potential it could change some elections but it doesn’t change whether they should vote or not.”

Twenty-three states across the country have made major reforms since 1997 to expand voter eligibility for felons and persons with criminal records, according to a report by The Sentencing Project called “Expanding the Vote.”

Some of these changes include amending lifetime disenfranchisement laws, expanding voting rights to persons on parole or probation, and easing restoration processes for persons seeking rights to vote after completing their sentences. Today, Maine and Vermont are the only two states that allow felons to vote during incarceration. Iowa, Virginia, Kentucky and Florida impose lifelong denials to vote for people with past felony convictions.

Neuborne says there are racial as well as partisan aspects to disenfranchisement.

The Census Bureau does not include felons and ex-felons as a demographic category in its breakdown of voter turnout. However, Martin says that hundreds of felons and ex-felons in New York State do not turn up to vote even though they can. He adds that, in 2004, the Board of Elections created obstacles to his regaining his right to vote.

“I sent in an application and, instead of sending me back a voter registration card, they send me back a letter saying you need a letter from your parole officer,” he said. “Anyone who knows anything about parole knows how hard it is to get a letter when you’re on parole much less when you’re done with parole.”

Neuborne says that, because the laws differ from state to state, many ex-felons are confused about their rights, creating another disincentive to vote.

“The trouble is that state rules are not uniform, so although you’ve made progress on them, you wind up with a checkerboard quilt and it’s so hard to advise people what they have to do in various jurisdictions,” he said.

The Brennan Center supports a bill called the Democracy Restoration Act that would restore voting rights in federal elections to disenfranchised Americans who have been released from prison and are living in the community.

“It would establish uniform rules throughout the United States and it would trump the few remaining states, like Florida and Virginia, that are hold-outs and that continue to make it hard for felons to vote,” Neuborne said. “Uniform rules would be so important because then you could really do serious organizing drives among that community and get them interested in voting and not have to have it be so complicated. It’s hard enough to get them to vote without that kind of additional complication.”