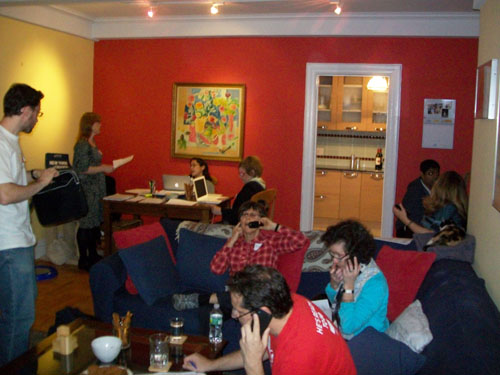 A torn ACL wasn’t going to stop Bill Wolfsthal. His soccer career is over, sure, but any campaign volunteer worth his weight in buttons knows phone calls aren’t made with your knee. When his friend and official event host Ann Kinshaw suggested to Wolfsthal, 50, that they cancel that Wednesday’s phone bank, a weekly assembly in Wolfsthal’s East Village apartment, the associate book publisher and former center defenseman immediately rejected the idea.

“I said, ‘How would you feel if just because I hurt my knee, Mitt Romney got elected,” he recalled. “It’s not the way this thing is gonna go.’ ”

As long as he and rescue cat Tara could open their home for the Obama campaign, keypads were going to punched. Wolfsthal’s apartment bell started ringing as early as 6:15 p.m. and scarcely stopped for the next 20 minutes. The host planted nosh around the apartment; nuts, grapes, cookies, cheese, crackers.

“A well fed phone bank is a happy phone bank,” Wolfsthal said, wearing a white Grateful Dead T-Shirt that mashes the band’s logo with Obama’s. The blue ‘O’ with red and white stripes is the same symbol tattooed on Wolfsthal’s inner left arm. The apartment door swings open. “How you doin’ Billy?” It’s Diane Vertal, a small woman with short curly hair and thin gold jewelry on her wrist and neck. A former Hillary supporter, Vertal, 55, is usually among the first to arrive.

The buzzer keeps ringing and callers keep entering. Deborah Schiffman, another repeat attendee, whom the group calls their den mother, arrived. Schiffman, 72 and known as Deb, is wearing the same pink framed glasses, and the same scarf tied around her neck, fastened with the same “Obamarama” pin as last week. Wolfsthal, despite his limited mobility, offered everybody drinks. “You don’t need to make calls sober,” he said, a sentiment unlikely to be found in more formal settings.

Aside from his years at Franklin & Marshall studying English, Wolfsthal has spent his life in New York City. Now employed by Skyhorse Publishing, he estimates that he has worked at six different book publishers during a 30-year career, starting as a book salesman right out college.

Ann Hinshaw splits the hosting duties with Wolfsthal, serving as the only actual campaign staff member present. As the Obama campaign phone bank coordinator for downtown east, she spends many nights at phone banks in a variety of settings. When the 30-year-old public relations executive arrived at Wolfsthal’s Second Avenue apartment, she greeted the regulars, poured a glass of red wine, and started handing out materials; a script, a list of Ohio voters, a call log to mark results.

Calls are typically made to crucial swing states, and the goal today is to gauge the intentions of Ohio voters and encourage early mail-in voting. By the end of the day’s two hour session, volunteers will have made a total of 1,000 calls, reaching 161 people, 104 of whom expressed support for the president. Hinshaw says this is very good. A majority of calls will go unanswered, but those that do provide a wide range of responses. Some Ohioans offer up their candidate of choice with pleasure, while others are unwilling to divulge such information. A few express outrage that they’ve been bothered. These phone banks are cold calls, solicitations, long-distance interruptions made to elderly and teenage voters alike by eager New Yorkers on their personal cell phones.

“We tell volunteers to be polite and respectful,” Hinshaw says. “We are essentially ambassadors of the campaign and, in a way, we are a reflection of the president and we want to be a positive reflection.”

If a call recipient is offended, Hinshaw says the volunteers will listen to the complaints and end the call peacefully. No need to prolong the call or be unpleasant.

But really, phone banking is awkward for the uninitiated. Spend five minutes in one of Wolfsthal’s rooms and the pro’s are easy to spot. They divert from the script in their own way, getting to the point much quicker than a straight dry read would. (At Wolfsthal’s request, the contents of the script, which can change weekly, are being withheld.) Novices hesitate to hit Call, stumbling if a call is answered.

In Wolfsthal’s bedroom, Betina Burrell-Terry, 53, speaks to a woman through an ear piece. The two share their ages, their sons’ accolades, and brief conversation about the election. “She must be lonely,” Burrell-Terry says afterward, having handled the situation with discernible skill. “You really learn by doing with phone banks,” Hinshaw says, “because you just can’t anticipate responses. We try to arm them in advance with information but a lot of it comes down to what issues are important to them and the voter.”

For Bill Wolfsthal, the issues that matter are social. The son of a holocaust survivor, he wants a government that protects “the rights of the minority.” Wolfsthal began volunteering first with the Kerry campaign in 2004. In 2008 he helped in the Get Out the Vote effort for the Obama campaign, and increased his role this year, hosting the weekly phone banks. The tattoo, he says, is about him and not the campaign. “It’s about empowerment. It says ‘Yes We Can.’ I don’t have to sit down and take stuff. I can take action to make my life better.”

Though his phone banks have a laid-back, social atmosphere, if you break biscotti with this bunch it’s clear that passion and urgency motivate. These volunteers feel an Obama victory is paramount to their stake in this country.

“I got involved because I was very concerned about losing all of the progress that I feel Obama has made and I have made as a woman in this country,” Vertal says. A participant in the 99 percent movement, Vertal is working part time, having lost her job “during the debacle.”

If Wolfsthal and his band of callers were confident four years ago, they’re less so now. Hinshaw is striving for assurance that on November 7th, she will know that she has done everything within her power to help the president achieve reelection. Fighting to start a dream is one thing, fighting to keep it alive is another. Wolfsthal quotes an adage — “You campaign in poetry, you govern in prose” — to illustrate how the public perception of the president has shifted. Obama’s first term yielded mixed results, and now voters need convincing that his policies are worth seeing out.

Volunteers like Wolfsthal, Hinshaw, and Vertal are doing their part to close that gap of doubt. Vertal feels energized and effective by making calls, getting strength from the people around her. It’s as if she’s speaking for the entire phone bank. It’s a community and party and a workplace and a home. The sense of camaraderie and impact is as plainly adhered to each volunteer as the name tag they wear. Bill, Ann, Diane, Deb, Betina, Hugh, Emma, Dave; calling on behalf of Barack.