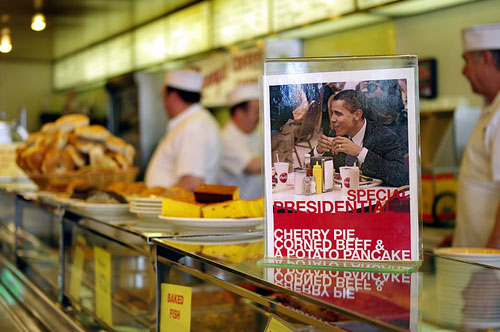 The Gateway Breakfast House in Portland has a wide range of belly-busting and classic American offerings, among them the cheesy ham and egg burger, the chili-cheese fries and the tuna melt. A little after noon on July 24th, 2012, the President of the United States paid the restaurant a surprise lunch visit. As the pictures snapped and the film rolled, Mr. Obama rolled up his crisp sleeves and ordered the cheese sandwich, some split pea soup and an iced tea.

Word of Obama’s simple selection eventually floated onto the Internet and became easily accessible through a Google search. Local news sources managed to unearth the most gripping information they could muster from the routine diner stop on a cross-country campaign trail: Obama left a portion of his soup unfinished.

Decades of detailed media coverage of such stops, as well as both standing and presidential hopefuls’ personal food cravings, continue to feed the detail-hungry public of such split-pea-and-cheese-sandwich leanings as Mr. Obama’s. And on the 2012 campaign trail, this tradition of closely tracking the candidates’ taste buds takes on more colorful form, thanks to young media platforms like the blog.

The Huffington Post told us the contents of Romney’s Chipotle burrito bowl at a Denver visit last month: black beans, pork, guacamole and pico de gallo. The New York Times let us know that Obama holds the mayo and isn’t too fond of salt and vinegar potato chips, while its magazine recently dedicated a large chunk of its Food & Drink issue to presidential cravings and food habits. Why the level of detail, and perhaps more importantly, who cares if Mr. Romney chose not to fill up on sour cream, or cheese, or hundreds of tasty calories in carb-packed tortilla form?

Presidents’ favorite meals have been closely followed since Washington took office. For instance, the nation’s third president, Thomas Jefferson, loved the French and finer things, preferring vegetables to meats and dining on olives, figs, crabs, oysters, pineapple and light wines. Abe Lincoln looked to his upbringing, eating just about anything on his plate (particularly bacon) and favoring meals fresh from the farm. Based on each man’s beloved public image, these cuisine choices seem to make perfect sense. Jefferson, the sophisticated and worldly president, picks figs with Madeira wine. Honest Abe, the no-frills, hardy president, picks apples and coffee.

Lynne Olver is the curator of Food Timeline, a comprehensive online database that meticulously breaks down the history of man and food’s relationship, with its own detailed section for each of the 44 U.S. presidents’ tastes. Olver’s Food Timeline has now joined the Twitter world and has received over 28.3 million visitors. The site has become a popular food and culture resource, providing food facts for major media like the Wall Street Journal, New York Times, Cooks Illustrated and Saveur. Olver believes that the American public’s curiosity in the food details come from a basic desire to know and relate to the candidates.

“Presidential candidates run on party platforms and grand promises but they, like us, are human beings fueled by food,” said Olver. “What they eat, how they eat it, and with whom, provide alternative perspectives to the public personae.”

Such discovery occurred for Olver stumbling upon reports of Nixon’s choice dish. “Watergate was the most important political event in my youth,” Olver said. “I knew that Nixon. Reading this account made me see him in a different light. A man who liked meatloaf. I made meatloaf last night.”

If the presidential candidate is what he eats, what are presidential candidates Barack Obama and Mitt Romney according to the food coverage of the 2012 campaign trail? New media in blog form allows public conversation to delve deeper into candidates’ choices, often with a little more sass into candidates’ choices—Buzzfeed dedicated a post to Obama’s decision to put a big bowl of fresh apples in his office with “40 Photos of the Oval Office Apple Bowl.” Magazines’ online blogs like Esquire’s “Eat Like a Man” and New York Magazine’s “Grub Street” post that Obama has a wide range of both healthy and indulgent favorites, with a particular fondness for cooking and eating chili. The President also remains faithful to choosing “man” food on the road, like ribs, pizza, burgers, and more burgers. Perhaps in his noticeably more sinful picks, Obama hopes to do what Mormon candidate Romney cannot: grab a cheeseburger and a beer and get chummy with the locals.

Consequently, Romney is known more for what he chooses not to eat, as he is restricted in his visits to small-town dives and in his overall diet by the moderation that his Mormon faith requires. While both men eat lighter and organic fare in their day-to-day routines, Romney’s favorites are, at their most exotic, narrowed to an almost kiddie level of simple: chocolate milk and peanut butter and honey sandwiches, considered bland by foodie blogs like Grub Street’s standards.

With foodie brains like Olver at viewers’ fingertips and gastronomically influenced roles like “The Healthy, Organic President” or the “Backyard BBQ Chili-Cookin’ President” to pick, the candidates have to think more deeply than ever about the food they put in their mouths. So to contenders of present and future campaigns: as you make your last stops in Haverford or Tuscaloosa, take a minute before biting into the sweet tomato and mozzarella of that margherita pizza, and consider the pro’s and con’s of meat-lover’s.  We’re watching you.