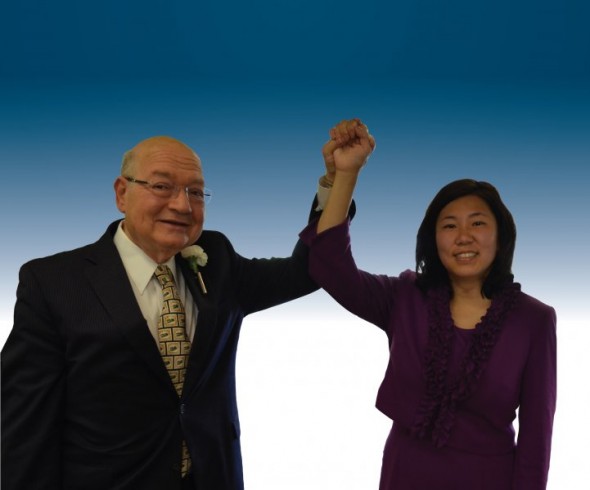 Redistricting is an infamously partisan process, driven by whichever party happens to be in control at the time. But a strange thing happened in New York this spring. Political stubbornness at the state level produced an exceptionally non-partisan result.

New York State lost two U.S. Congressional seats after the 2010 census revealed population shifts to other parts of the country, bringing the state’s representation in the House of Representatives from 29 to 27. It was up to the state to decide which districts to eliminate, and how to redraw the existing borders. The census bureau made their announcement in December 2010.

The divided state legislature, a Democrat-controlled State Assembly and the Republican-controlled State Senate then spent fifteen months failing to propose a district map that would be acceptable to both of its houses and approved by Governor Andrew Cuomo, who had promised to veto any new map not created by an independent authority.

The law only specifies that districts be contiguous, and that they not be drawn in a way that dilutes the power of minority voters. Beyond that, each state may draw borders as it sees fit, and, of course, the governing party usually does so based on the political geography of the state, maximizing election outcomes in its favor.

“Anyone who looks at the maps will see the political machinations. You don’t have to look hard,” Cuomo said in January, defending his decision to use his veto power. In March, he did approve new districts for state government representatives, but not for Congress.

Federal judges stepped in to take control of the process just before the filing period was to begin for candidates to appear on the ballot for statewide primary races. The districts they came up with turned out to be remarkably fair, constitutional, and not at all politically oriented.

It was expected that New York would primarily leave existing districts in tact, eliminating two and absorbing them into neighboring territories. The old 9th district was assumed to be on the chopping block. It stretched from Western Queens to South Brooklyn, and was vacated early by Anthony Weiner last September. A special election put a Republican, Bob Turner, in that seat for the first time since 1923. The 9th has been home to Democratic Party heroes Chuck Schumer and Geraldine Ferraro. It was also assumed that one under-populated district in Western New York would be eliminated and absorbed.

Magistrate judge Roanne Mann oversaw the process of proposing the new map that would later be approved by a panel of three Federal circuit court judges. Judge Mann relied on the appointment of Columbia Law School faculty Nathan Persily, a voting rights expert who has in the last 10 years driven the redistricting process in Maryland, Georgia, Connecticut, and also New York in 2002 after the previous census. At that time, however, his proposals were superseded by the state legislature’s agreed upon gerrymandered plan. Persily specializes in and advocates for voting borders that are constitutionally sound and non-partisan.

Persily and Judge Mann took only “traditional redistricting factors” into consideration in their process. They attempted to make each district as compact as possible, rather than the sprawling, squiggly, areas traditionally used to connect populations which are geographically disparate but politically similar. They also attempted as much as possible to draw borders using the existing political divisions of towns and counties. This is very visually apparent in an area like Monroe County, just south of Lake Ontario. The county used to span four districts splaying out over several hundred miles in every direction. Now county borders align nearly exactly with those of the new 25th district. For the first time, the more staunchly liberal city of Rochester, which is Monroe County’s seat, along with Rochester’s more conservative suburbs, will be represented as one constituency.

In their strict adherence to the principle of making districts compact, Persily and Judge Mann did not take the residences of incumbent representatives into account. Since congressmen are required to live in the area they compete in for at least one full year before their election, the possibility was created that two incumbents of the same party would run against each other in their newly formed district. This would have happened in the new 3rd district, where Gary Ackerman, a Democrat of the old 5th, and Steve Israel, a Democrat of the old 2nd, would have faced off in the primary.

But at age 69, and in office since 1983, Ackerman announced his retirement immediately after the new district plans were ordered. There was speculation that Ackerman wanted to leave, but was waiting to announce it, believing the legislature would not eliminate a seat an incumbent was likely to hold. Instead it seems that Ackerman has been fed up for quite a while with those he calls “terrorists” and “obstructionists throwing sand in the gears just for political reasons

The rippling shift triggered by Ackerman’s retirement, makes room for a new representative in the new 6th district, which covers the Queens neighborhoods of Flushing, Bayside, and Forest Hills. With a heavily Democratic base, Grace Meng, a Democrat, who currently represents Flushing in the New York State Assembly, is expected to win the seat. Meng’s parents emigrated from Taiwan. If she wins, she will be the first and only Asian American to represent New York in the federal government.  A win for Meng would also mean one more woman representative for New York. In 2010, New York elected nine women from both parties to its 29 available seats, making the total body about 31 percent women.  If every incumbent woman holds, and Meng wins, there will be 10 women in 27 seats, about 37 percent women.  The percentage of women in Congress nationally is only 18 percent. 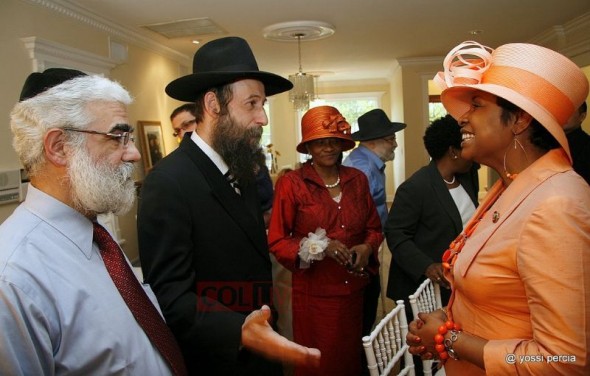 Rep. Yvette Clarke of the 9th district talks with Jewish leaders in 2009, before the shuffle. The 9th retained its significant African American and Jewish voter constituencies.

The judiciary panel that ultimately approved Mann’s report and recommendations were also tasked with ensuring the new plan would maintain the legal precedent in redistricting to preserve “communities of interest.” Generally this refers to ethnic minority voting blocks, and is meant to prevent intentional dilution of the power of minority voters. Some existing minority blocks were kept relatively intact because their geography met other requirements. Yvette Clark, for example, is an African-American Democrat, representing the old 11th district, surrounding Prospect Park in Brooklyn. Her constituency was 53 percent black and 74 percent minority. The seat she will retain in the 9th district takes 76 percent of its population from the 11th, and remains a black minority-majority district.

In March, the panel heard a complaint from the Orthodox Alliance for Liberty, asserting that the new plan would break up “the large Orthodox Jewish neighborhood of Flatbush… subsum[ing] it in neighboring African American communities.” Orthodox Alliance asked that the panel redraw borders in Brooklyn and Queens such to unite geographically distant Orthodox Jewish communities. They heard a similar request from the Dominican American National Roundtable, asking that Dominican Americans be united with other Hispanic communities to create a majority district that would wind through upper Manhattan into the Bronx, and eastward, all the way into Corona and Woodside.

The judges, Reena Raggi and Gerard E. Lynch of the United States Court of Appeals for the Second Circuit and Dora L. Irizarry of Federal District Court in Brooklyn, rejected both requests,  emphasizing their “constitutional obligation to protect against discrimination in redistricting while at the same time avoiding the use of race or ethnicity as “the predominant factor” in delineating a district.”

There is good reason Hurricane Sandy will be the cause of low voter turnout in the Long Island and Staten Island areas. What this will mean for New York’s two closest toss-up races, the 1st, covering the Easternmost portion of Long Island, held by Democrat Tim Bishop, and the 11th, covering all of Staten Island, along with Brooklyn’s Bay Ridge and Dyker Heights neighborhoods, held by Republican, Michael Grimm, won’t be known until after the vote is counted. Bishop has out-fundraised his Republican challenger, by a half-million dollars, and Grimm has raised $1.4 million more than Democrat Mark Murphy. That may matter little, if their constituents are busy struggling to recover from the storm.