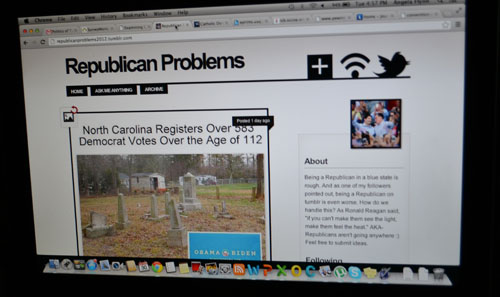 These words and phrases can be seen on the blogging site Tumblr, a website that is intended to be a positive medium for free and open debate. Instead, during this election season, some users have turned the site into a warzone of harassing comments.

Tumblr is “a place for creative folks of all stripes to connect around their interests” says Liba Rubenstein, director of outreach for causes and politics for the website. In that spirit, Tumblr allows users to send and receive messages with the option to allow for anonymous messages. It is generally through the “Ask Box” that Tumblr users receive insults and threats, sometimes from anonymous users.

“There’s no question that a perception of privacy and anonymity on the Web allows some people to express things that they couldn’t or wouldn’t express in person,” says Rubenstein. “And certainly some people will be jerks if there are no social sanctions attached to it.”

Two hundred anonymous users were surveyed about their experiences in terms of the election and of politics on the blogging website. Fifty-eight of those participants admitted that they received hate messages after they expressed support for a presidential candidate and voiced their political views – majority of those users were Republican bloggers.

“Anecdotally, the largest and most active political communities on Tumblr are among folks with liberal/progressive and libertarian views, with a growing set of conservative voices becoming more active in this election cycle,” says Rubenstein.

One Republican user was told to end his life.

“I was told, basically, that I was stupid and that I just believed what religion shoved down my throat,” he said. “I was also told that I hate gays and women and that I’m ignorant and need to educate myself. Oh, and once I was told that I should be shot.”

Democrats were not immune to the harassment though, as one Democrat said that she had been called a “transf*ck freak chick with a dick” after she had a political debate with another blogger.

Seven users who took the survey admitted that they had sent harassing messages to other users, including the same user who had been called a “transf*ck freak chick with a dick.” She once told a user that “voting republican makes you a misogynistic racist bigot.” The recipient of her message deleted her blog as a result.

These harassing messages go against Tumblr’s Community Guidelines, Rubenstein said, which state that though the website promotes freedom of speech, they “draw lines around a few narrowly-defined but deeply important categories of content and behavior that jeopardize our users, threaten our infrastructure, or damage our community.”

One such category is “malicious bigotry” which is defined as hateful speech based on users gender, age, race, sexual orientation, ethnic origin, religion, disability, gender, or veteran status.

Tumblr is not the only website that contains these types of harassing messages. Eighty-eight percent of teens have seen violent behavior on social network sites at least once, according to a study done by Pew Research Center in 2011. Their study analyzed various other websites, including Facebook, MySpace and Twitter. The positive flipside is that 84 percent of those teens saw other people trying to stop the cruelty.

Though Tumblr says that they do not tolerate messages like these, it is hardly possible to monitor all of the 77 million blogs on their website. Tumblr has been doing what it can to promote positive political discussion amidst the hate that is speckled throughout it.