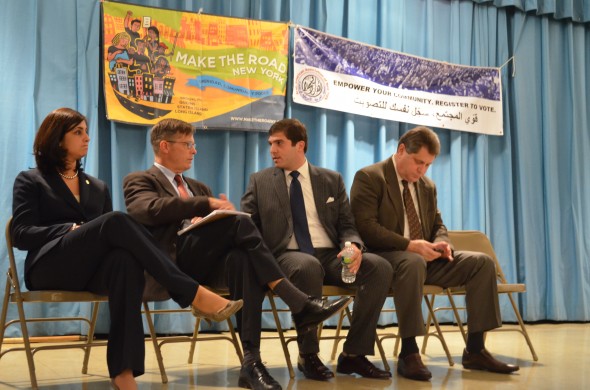 Republican and Democratic candidates for state legislature wait to make their case to Brooklyn’s Arab-American voters. Photo courtesy of the Arab American Association

Police surveillance of religious institutions, immigration policies and protests against construction of a mosque—not the typical issues for a candidate forum in this election year, but the ones on the minds of New York’s growing Arab-American community.

For two hours, candidates for state office faced those questions, along with questions on same-sex marriage, education and tax policy, at a recent meeting in a public school in Brooklyn’s Bay Ridge neighborhood. Conversation in Arabic regularly intermingles with English on the streets of this community, one of the country’s largest Arab neighborhoods.

The Arab American Institute estimates the Arab-American population has grown to 3.6 million nationwide, with 450,000 in New York State. Only California has more. The New York metropolitan area has the third largest urban concentration, after Los Angeles and Detroit.

As the voting power of this community grows, candidates try to adjust. Hosted by the Arab American Association of New York, the Bay Ridge forum heard candidates try to win the audience’s favor, even by setting aside their previous statements.

Republican state legislator Marty Golden did not mention his past support for a New York Police Department program to monitor mosques as part of an anti-terrorism campaign.

“Anybody that would spy on any religious institution is absolutely wrong. I do not stand with anybody who would do that,” he told the audience. “And I don’t believe that this police commissioner (Raymond Kelly) would do that but, if he has, he should apologize – but it hasn’t been proven that he has.” 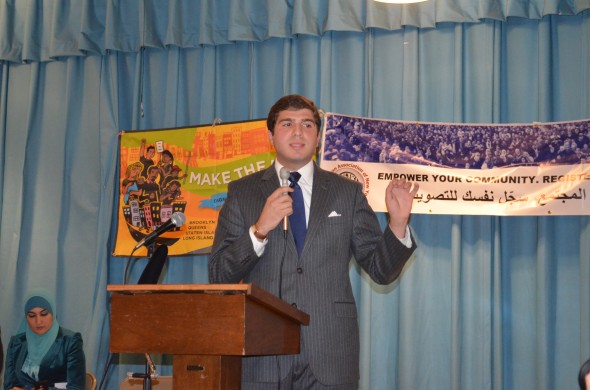 “We, elected officials of New York City and State, write to you today to applaud you and the NYPD for using all means at your disposal to prevent another terrorist attack like 9/11 from occurring,” the letter read in part.

Despite such questions about mosque surveillance and the Republican position on immigration policies, the idea of Brooklyn as a melting pot continues to dominate political rhetoric here. Alec Brook-Krasny, a Democratic legislator who was born in the Soviet Union in 1958 and immigrated to the United States in 1989, reminded the audience that “the issues that we’re worried about are the same.”

Chris McCreight, manager of Gounardes’ campaign to unseat Golden, also emphasized the community’s similarity to other working-class voters in Brooklyn. “Just like everyone else, they want the minimum wage increased,” he said in an interview.

McCreight denied that Brooklyn’s Arab-American population had a particular partisan lean. He nevertheless accused the Republican incumbent of shifting the boundaries of his district to replace some working-class Arab-American voters in Bay Ridge with a more affluent, mostly Jewish community in nearby Manhattan Beach. The Gounardes campaign has repeatedly leveled this charge against Golden since the proposed revisions to the district maps were made public earlier this year.

Calls to Golden’s office seeking comment were not returned. In February, Golden’s campaign stated that, while he was pleased with the new district map, he denied any role in drawing it.

“Senator Golden was not involved in the creation of these districts, but is pleased that the proposed 22nd Senate District contains about 95 percent of his current district, while picking up some new neighborhoods,” Golden’s office wrote in a statement to Politicker.com at the time. The new map does remove several Bay Ridge city blocks from Golden’s district, while adding a section of Manhattan Beach.

The only candidate who declined to appear at the event was the neighborhood’s congressman, Republican Mike Grimm. The Arab American Institute, a national political research organization founded by prominent Lebanese-American James Zogby, gave Grimm a negative rating, largely for his support of pro-Israel legislation. Zogby is currently a member of the national executive committee of the Democratic Party.

The Arab American Association of New York, a community group, is striving to defeat Grimm in the Nov. 6 election.

This year, get-out-the-vote efforts by the Arab American Association have registered more than 2,200 new voters in Brooklyn, who could swing close races to Golden and Grimm’s Democratic challengers. Grimm won his seat in Congress by fewer than 5,000 votes in 2010.

The association’s executive director, Linda Sarsour, said during a voter registration event in September, “We believe that our district is going to set an example of what happens when people of color and immigrant communities come out to vote in large numbers in 2012.”