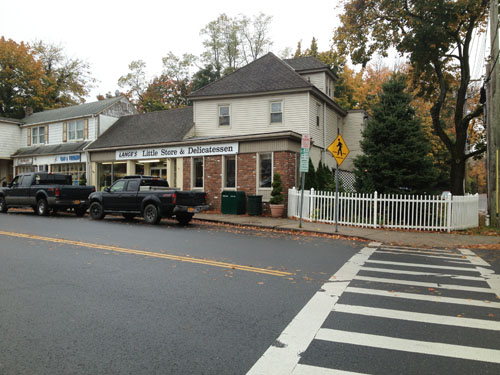 The news trucks breathlessly reported the breaking story from the Chappaqua grocery store parking lot, more than a decade ago. As far as anyone could remember, it was the first time the Secret Service had come to the hamlet of Chappaqua, New York, a 50-minute ride to Manhattan’s Grand Central Terminal via Metro North, in Westchester County. It was also the first time that the town could claim a former president as a resident, along with his wife, whose political career would grow from senator to potential presidential nominee to Secretary of State. Bill and Hillary Clinton had transformed Chappaqua into Bill-and-Hill-Ville.

Residents were abuzz back then. Along with nearby restaurants owners, they would eagerly share tales of casual run-ins with the 42nd president at Starbucks or the now-defunct Second Story Bookstore. Sightings of Hillary were less frequent, with her burgeoning role in public service, though she dutifully marched in the town’s Memorial Day parade, most recently with Governor Andrew Cuomo, who owns a house in neighboring Mount Kisco. Shopkeepers along South Greeley Avenue, Chappaqua’s equivalent to Main Street, hung photos of themselves posing with one or two Clintons behind the cash register.

But has the aura of celebrity faded? The residents initially loyally followed each move, especially Bill’s, but the gee-whiz enthusiasm appears to have subsided. Seeing Clinton walk his dogs past my parents’ house, followed by a security detail including a bouncer-like agent with a visible holster and a slow-rolling, tinted-window SUV, is still startling but it’s no longer a cause for celebration.

The former president is a frequent customer of Lange’s Little Store, a delicatessen nestled among a cluster of shops at the intersection of King Street and South Bedford Road. It’s less than a five-minute drive from his white house (not the one on Pennsylvania Avenue). The manager, George Haletzky, recalls Clinton’s first visit to the store. “I was here right from the beginning,” he said. “It was like a circus, a good circus, but a circus. Anytime you get to meet somebody that important … it’s also kind of an honor.”

The manager says that Clinton has stopped by less frequently lately (“I think it’s because he’s been busy campaigning”) and was happy to discuss the former president’s menu choices (“he eats healthy food, anywhere from egg white omelets to turkey sandwiches.

Vincent (“call me Vinny”) Milazzo, a store manager at Chappaqua Village Market, a specialty food store, was much more guarded in discussing the presidential palate. His family has owned the business for more than three decades, selling choice cuts of meat, fresh-baked bread and pastries, and Italian cooking essentials, among other goods. Train tracks are located just across the road, at the beginning of King Street, and the whistle can be heard as a southbound train rolls by.

Citing trouble with Clinton’s press team in Washington for interviews he had previously granted, Milazzo, 48, would only speak in generic terms. He has finessed his Clinton spiel: They come in often and they’re very friendly, he conceded. It’s much less crazy when they visit these days compared to a decade ago.

At Grafflin Elementary School, Principal Mike Kirsch warned that he would be cautious in discussing the Clintons, who come to visit when voting booths are moved into the lobby on Election Day. “My role is [to be] the elementary school principal, not to talk about the president,” Kirsch said. Just a few weeks before the election, the lobby doesn’t look like a polling site, with rows of tables showing “The Second Grade Pumpkin Parade of Literature” lined up against the wall displaying fifth graders’ fish artwork.

The political couple’s attendance on Election Day has waned in the past few years, he said, adding, “so I guess they’re voting absentee.” The first Tuesday in November is treated as a staff development day in the Chappaqua Central School District, Kirsch explained. “Typically, we don’t have students here, but if [the Clintons] come when the parents are voting, he’ll talk.” The principal has been a Chappaqua resident for 38 years, so he’s seen Bill outside of the school walls, saying, “He is extraordinarily gracious.”

Even a United States President can blend seamlessly into the fabric of a town. But a Clinton appearance can still occasionally cause a minor frenzy. Last summer, a woman paying for her beverage at Starbucks rushed outside to greet the former president before completing the transaction, joining a small crowd of others waiting to shake hands and capture iPhone photos. This Election Day, Chappaqua voters can only hope for an extra frisson of excitement—and perhaps one more sighting—when they head to the polls.