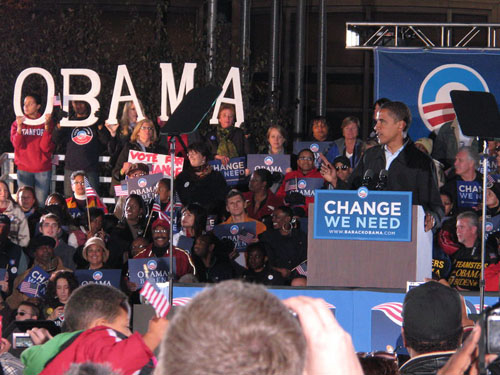 As the 2012 Presidential election looms, college students straddling New York and their hotly contested swing states such as Ohio and Wisconsin are grappling with where to cast their ballot. They have the option of either registering to vote in New York, or sending their vote home with an absentee ballot in the hopes of making their state swing a little more their way.

This choice brings to mind something a politically charged Dr. Seuss would say, “One state, two state, red state, blue state.” This (slightly altered) mantra is a full on rumba for those students hailing from the swing states.

In their responses, they noted that Mitt Romney and President Obama are campaigning relentlessly in their schools, offices, and airwaves. They understood the election will be decided by the slimmest of margins their home states and their votes are the ones that will potentially decide the next President of the United States. And they’re not taking it lightly.

Sundus Arain, a 20 year-old NYU student from Germantown, Wisconsin, who sent for an absentee ballot from Abu Dhabi where she is studying abroad, said, “The sad truth is, my vote does count more than others, especially in Wisconsin. It’s a tight race there.”

“As the politics of Ohio have a way greater sway on the national level then those of New York, it makes more sense to vote where I grew up,” Kopnick said. Absentee ballots made up about 30 percent of the vote in Ohio — numbers that definitely hold some weight according to United States Election Project, but that’s referring to current residents not absentee ballots

With regard to how students prefer to vote, a study by Circle for the 2008 election found that college students from swing states chose absentee voting in their home states by an 8:1 ratio over voting in their college state. Michael Peshkin, a Northwestern professor who conducted the study, stated that he predicts those numbers will increase for the 2012 election, “Overall in the U.S., absentee and early voting have been strongly on the rise.  I’d expect students to be ahead of the curve.”

While it seems most students from swing states choose absentee to optimize their vote, a few specified kinship to their home state. In addition to her vote “counting more,” Carolyn Boyce, NYU student from Cincinnati, Ohio, said, “I still feel like I live in Ohio, not the state where I’m going to college.”

No student seemed deterred by the voter registration process in New York, which requires a filing a completed form 25 days before the election. In fact, it seemed none of them even considered voting in New York in the first place. New York’s hue is too steadfastly blue to be of any excitement. Leah Shultheis, a 19 year-old NYU student from Westerville, Ohio, said that because New York is guaranteed to go blue, ”My vote in New York would have been almost a waste. As for who I’ll be voting for, one thing is certain,” she continues, “it won’t be Romney on my ballot.”