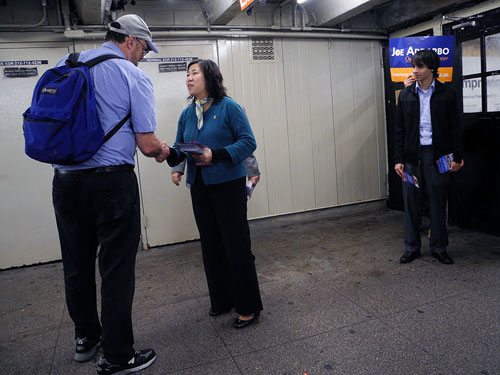 On an overcast Friday in October at the Fresh Pond subway station, early morning commuters hustle up the stairs with weary expressions and are greeted cheerily:  “Good morning, I’m Grace Meng; please vote on November 6,” calls out the assemblywoman for New York’s 22nd district in Queens. Passersby take or refuse a flier wordlessly, but the rejections don’t deter Meng. She is poised to make history.

With the city’s recent redrawing of districts to more adequately represent the Asian-American voice, the sixth congressional district that Meng seeks to represent is nearly 40 percent Asian, which bodes well for her Congressional campaign. She only had a short break on a busy Saturday afternoon for an interview, which was conducted in the small storage room of her buzzing Flushing office.

Undoubtedly, Meng’s experiences in both Chinese and American cultures give her a distinct advantage in her assembly district of Flushing, an area commonly known as New York’s second Chinatown. She is a strong promoter of Asian Americans participating in politics and the community and believes that helps combat racism. “There’s a huge perception by many people, including Asians, that we’re not American,” she said. “I think that the more people see Asians around them being citizens who give back to the community, their perception of Asians will change.” Getting Asian Americans to vote can be a challenge, Meng conceded, and noted that Asian senior citizens vote at a much higher rate than people in their 20s and 30s. Her campaign involves high school and college interns to give them exposure to understand the importance of political participation.

In order to achieve policy goals, Meng often reaches out to Democrats and Republicans alike. Her willingness to work with both parties has bolstered her reputation as a likable and atypical character in legislature, a characteristic that could be valuable in a recently gridlocked Congress. “I know Democrats who won’t even talk to Republicans,” she joked. For this fall’s campaign, Meng established a new Forest Hills office in Queens, though she spends most of her time outside, getting to know members of her district by knocking on people’s doors or greeting them in the mornings at subway stations. Eating at a table has become a luxury, Meng said, and for respite, she spends time with her husband and two young children.

Born and raised in Queens, Meng is the daughter of Chinese and Taiwanese immigrants. Unlike the district of Flushing that she currently represents, the Queens that Meng grew up in didn’t have many Asian Americans, which is “hard to believe now,” she acknowledged. “I was, for most of my elementary school years, the only Asian girl in the class.” The lack of diversity made her feel different, but not uncomfortable, which is reflected in the way she has successfully courted voters from various sections of the community in her campaigns.

A career in politics was a relatively recent development for Meng. She initially set out to be a teacher or lawyer, studying history at the University of Michigan and returning to New York to study law at Yeshiva University. In New York, Meng spent time interning in various government agencies and began to envision herself working for one as an analyst without any thought of running for office. “It was very exciting to be in the midst of all the policy-making,” she said. After law school, she helped her father campaign for the State Assembly, and a seed of opportunity was planted in Meng’s mind when her father decided not to run for assembly reelection in 2006. Being a shy person by nature, Meng felt nervous about the change of pace, but the chance to represent her community gave her the motivation to run—and win– against incumbent Democratic candidate Ellen Young in 2008.

Her chances of winning are good in an overwhelmingly Democratic district, as she won the Congressional primary in a landslide against the other Democratic candidates and has been endorsed by everyone from Mayor Michael Bloomberg to current Congressman Gary Ackerman, who is retiring from representing the district. There have been setbacks, however, such as when her father, Jimmy, was arrested on bribery charges in July. Meng has tried to separate herself from her father’s misdoings while remaining sympathetic. Her own finances received scrutiny when she failed to file personal financial disclosures four months after the deadline, citing an “administrative oversight.”

At the heart of her political vision remain the needs of the community, which comprises many ethnic groups, not just Asian American. In her historic run for Congress, Meng still considers herself to be all-American, and seeks to be a role model for young women as well as ethnic minorities. “I wish that when I was a kid, I could’ve seen more women in positions of influence,” she said. “Just to see someone who looks like you, it provides some kind of encouragement.”