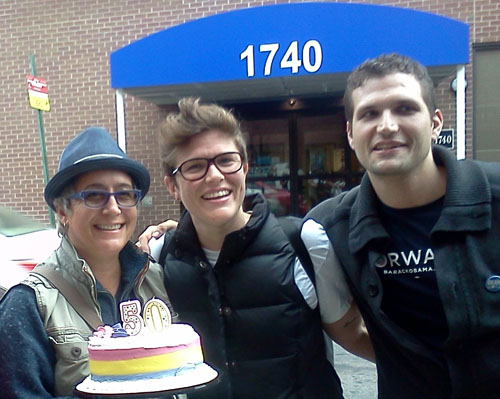 Lisa Cannistrati with her birthday cake flanked by Erin Drinkwater and Jeremy Markman on the right.

It was an unusual time for a 50th birthday party: 7 a.m. on Saturday, October 27. The four people loafing outside the Henrietta Hudson, known as a local “Bar & Girl” in the West Village, were not finishing a celebratory night. They had just arrived—on time. Odder still was that of the foursome, only one knew the birthday girl, bar owner Lisa Cannistraci.

A fifth person joined, wearing an Obama T-shirt, layered with a warm down vest. Her dirty blonde hair was cropped boy-short, with a pair of black, square-rimmed glasses balanced on her nose. Erin Drinkwater walked briskly, exuding excitement and authority, corralling the loiterers as they moved on to other party locations. One block away the group entered The Goodwin, a West Village restaurant, which had opened early to feed the 22 bleary-eyed people gathered in booths and tables. They were given with hot coffee, and a spread of scrambled eggs, French fries, toast, berries, granola and yogurt, as well as chicken and salad.

By 8 a.m. the volunteers were awake, nourished and ready to participate in the Women’s Bus REDUX, a trip to the battleground election state of Pennsylvania. Drinkwater addressed the group. “There are only 17 women in the Senate,” she said, “representing 51 percent of the population.” This morning only six of the 22 gathered were men; many of those present were members of the Lesbian Gay Bisexual Transgender (LGBT) community.

The crowd ranged from the newly eligible to vote, Marymount Manhattan freshmen, to those who had been politically active for half a century. A few were loyal Obama volunteers, gushing about their past and future trips to Ohio.

Most had signed up at Drinkwater’s urging. Several were there to celebrate with Cannistraci. At 8:25 a.m., the volunteers left The Goodwin, stopped at the Obama for America headquarters uptown to cram empty seats with more volunteers, and then headed off.

The Women’s Bus REDUX: On the road

Drinkwater twisted—half kneeling, half standing—facing the rows of seats behind her, the name “Spoof,” a childhood cat, forever memorialized on her left forearm. She encouraged the volunteers to stand and share why they chose to spend their Saturday canvassing.

One by one they spoke, drawing nods of approval and a smattering of applause. Barbara grew up in Spain under Franco, and vowed she was “not going to take democracy for granted.” Mary’s fiancé is Canadian; their gay marriage would not be recognized nationally. How would she sponsor her new wife for citizenship?

Phyllis has been politically active since the 1940s. She began fighting for civil rights, and has since extended the struggle to women and the LGBT community. Cannistraci’s activism goes beyond owning the “hottest lesbian bar.” She is also Vice President of Marriage Equality USA. Natalie James worries who will appoint the next Supreme Court Justices. “Ginsburg isn’t getting any younger.”

Some, like Brooke Materia and Jocelyn Swenson, were first time voters and canvassers. Dana Massarsky, member of Democratic Leadership for the 21st Century, had been canvassing almost every weekend for the past two months. She vibrated with excitement when discussing an upcoming trip to Fairfax County, Virginia. “Instead of taking the time to be scared,” Massarsky said, “I’m working.” Sitting back was not an option. She laughed, “I haven’t seen my boyfriend in two months.”

Each volunteer would receive a “walk kit” comprised of a map (dotted with houses to visit), a list of voters, and a script designed to encourage voter turnout. The weekend before Halloween, Drinkwater described canvassing as “kind of like trick or treating.” The volunteers would only be visiting the doorsteps of President Obama supporters. The goal was to make sure that these registered voters actually made it to the polls.

Some states like New Hampshire “swing” due to independent or undecided voters. Pennsylvania is a different breed. With around 1 million more Democrats registered to vote in the state, the outcome depends on who shows up at the polls.

Corey Robinson went out drinking the night before. He is running on three hours of sleep. Dressed in a turquoise checkered shirt, jeans, and a camel colored leather jacket, his gait is zombie-like but attitude is remarkably good-natured. Robinson, in his mid-30s, works with the elderly as a social worker, but he moved to New York to become “the black Regis Philbin.”

He grew up in South Carolina, but is dedicated to his adopted city, saying that New York “is the first place where I live matches my views.” He canvassed for Obama in 2008, and is a little nervous this time around. “Black voters will come out for Obama…but they’re disappointed by his gay marriage stance.” Robinson says preachers in his home state are asking parishioners to stay home on Election Day. He is slowly weeding out Facebook friends who share that view.

The “walk kit” in Robinson’s hands took him to a slowly gentrifying Philadelphia neighborhood known either as Graduate Hospital or Southwest Center City. He strolled south on Fitzwater Street past rows of neatly stacked houses—each three stories of assorted brick shades. To everyone he encountered, he smiled and called out, “Don’t forget to vote!”

This was friendly territory. Obama for America posters, bumper stickers, and supporters were plentiful in this cross-section of suburban Philadelphia. Insulated, it was easy to forget Pennsylvania is a highly contested state. Democratic incumbent Senator Bob Casey is now fighting to retain his seat.

Demographically the neighborhood is largely black with a sprinkling of young white couples and students. Churches are interspersed between the houses. On 15th Street in front of United Muslim Masjid, a small carnival to celebrate Eid was drawing a crowd dressed in traditional religious garb. Where 15th met Christian Street the religious Pathfinders Scouts meeting ended, scattering uniformed pre-teens into the streets.

Before 3 p.m., Robinson would march up to 74 doorsteps, knock on 74 doors, and speak to six people. He was persistent. Ringing twice. Standing for minutes. Calling up to open windows. On the street Robinson talked to everyone. Spreading the message to vote beyond headquarters’ specifically mapped houses.

Pennsylvania: The Voters Who Matter

In the suburban streets, Lisa and Jeremy Nearhoof were taking advantage of the mild fall day, pruning two window boxes of winter plants. Both are in their early-30s. Lisa moved here from New York City four years ago; Jeremy is a Pennsylvania native and a registered Republican. But he’ll be voting for Obama for a second time, and his reasons are economic. “It’s silly to think that one person can create 10 million jobs…there’s no magic cure,” he said referring to Romney, “What wouldn’t work is what we did in the 2000s.”

Lisa, who carries Pennsylvania identification from the last election, says her main focus is women’s issues. “It just makes me feel like our country is behind in so many ways,” she sighs clipping off branches of a flowerless shrub.

Back at Base: South Street

Squeezed between South Deli & Grocery on the left and a pharmacy to the right, 1737 South Street is the lively Obama for America headquarters. At 3:45 p.m. on a Saturday there are roughly 25 people working. Posters of the President and campaign slogans coat the walls. People chatter at phone banking stations; a supervisor hands out assignments.

Kathy, mid-60s, searches for a lighter. A large cake with candles spelling out “five zero” is waiting to surprise Lisa Cannistraci. After a round of “Happy Birthday,” the tired but fulfilled volunteers pile back on the bus.

Heading back to New York City, the volunteers share notes and swap canvassing stories. Marymount Manhattan students, Materia and Swenson produced a crumpled Mitt Romney leaflet they were handed at one house. They knocked on 150 doors and spoke to 27 people whom they described as “99% enthusiastic.” Materia canvassed today even though her right leg is bound in a full-length brace. “I don’t want to sit back and think it’ll be OK,” she says. Fear of a Romney presidency sparked Swenson into action.

Natalie James is seated next to her girlfriend Diana Scholl. They canvassed in a more upscale area filled with family homes. The two had an admittedly wonderful day. Both have professions that work directly with impoverished and working class families. They are Obama supporters for this reason among others. “Romney would totally decimate the social safety net,” James warns.

Midway though the ride home one-half of the passengers dozed off. The others chatted about the election or circulated rumors of a storm headed for New York. Was Governor Cuomo really closing the subways at 7:00 p.m. the next day? Never mind there was a political storm only 10 days away. A sense of optimistic calm fell over the exhausted volunteers.