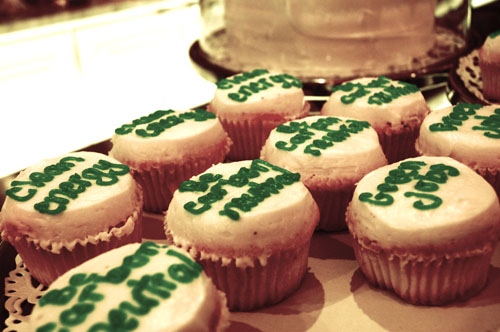 It was a quaint idea for a big city event: a Manhattan bake sale to raise money for the Obama campaign. But Massimo LoBuglio, one of four Brooklyn-born LoBuglio brothers who opened the Little Cupcake Bakeshop in 2005, had a sophisticated agenda in mind. Since the environmentalist had gone out of his way to create a carbon neutral company, his event was designed to raise money and consciousness about climate change.

LoBuglio teamed up with philanthropist Arden Wohl for the grassroots Cupcakes for Obama fundraiser on October 23rd at the Prince Street Café. At the event, LoBuglio used the carbon neutral cupcakes, packaged in biodegradable containers, as a sweet and approachable way of telling the dark and intimidating story of climate change and its effect on the economy, food prices, jobs and international trade and start a community conversation. A tall order for a little dessert.

“There were a lot of high-profile events going around the city, we wanted to make something more accessible,” explained LoBuglio. The suggested donation for their event was $50 and the owners also donated the sales of all cupcakes bought that night.

At 7 p.m. the café’s doors opened and LoBuglio and Wohl welcomed sixty of New York’s environmentally conscious citizens. From an outsider’s view you would not know that Little Cupcake is the only carbon-neutral café in Manhattan. The retro-chic interior design with a neon red and blue clock, glass chandeliers and red and black-checkered floor blend with the vintage-American feel of stores like Magnolia Bakery and stylishness of Sprinkles or Baked by Melissa.

LoBuglio, wearing canary yellow hipster glasses and festive green and white hourglass pattern button-up sweater over black jeans, greeted guests as they walked through the café’s French doors. Wohl, who arrived fashionably late, bought her brand of star power to the event. She remained a vortex of black hair and black tulle for the night, attracting clouds of patrons to discuss Romney, saving the EPA, voting and cupcakes.

LoBuglio designed both Little Cupcake Bakeshops, one in NoLita and the other in Brooklyn, to operate as carbon neutral. ‘Carbon neutral’ means emitting no greenhouse gases such as carbon dioxide (CO2), methane (CH4) or nitrous oxide (N20) into the atmosphere or buying offset credits for any greenhouse gases that can’t be mitigated. Chalked on to a white blackboard behind the dessert display, LoBuglio had outlined the owners’ green business practice.

Both cafés buy wind power through ConEdison Solutions, use local and/or organic ingredients in their desserts and coffee and fitted the café with high efficiency lighting, insulation and water aeration. The result is a green business with tasty cupcakes, killer coffee and an electric bill slashed by two thirds.

LoBuglio and Wohl decided to raise money for Obama due to his track record on auto efficiency standards, green jobs and investment in renewable energy. “President Obama is the stronger candidate between the two to address global warming,” said Wohl. “When he took office in 2008, he promised a new chapter in US climate action, and he needs eight years to finish what he started.”

LoBuglio expressed concern about what might happen to environmental policies if the GOP wins the White House.

“I fear what the Romney presidency will look like. Some people in the Republican Party want to pretty much gut the EPA,” said LoBuglio. “Obama presents the best answer at the moment. At least with him we get to keep the progress America’s made in the past 40 years.”

LoBuglio explained that many of his green initiatives actually double as good business practice, since the company saves an estimated $20,000 a year in energy costs. From this perspective LoBuglio argues that his green ventures are actually consistent with the Republican ideology that the private sector can fix society’s problems.

But back in 2005 when LoBuglio and his three brothers opened their flagship store in conservative Bay Ridge, Brooklyn, not everyone had a frosting-pink outlook on the eco-conscious venture.

“At the time the perception was ‘you’re crazy, you’re talking about green Republicans. They’re not going to buy cupcakes and you’re going to go out of business’,” said LoBuglio. But the Bay Ridge Republicans did buy cupcakes, brownies, pies and lattes. “People were like ‘we get it: clean air, clean water, less pollution, a small business doing the right thing,” recalled LoBuglio.

The concept of environmentalist Republicans might sound like unicorns, but a recent poll by the Pew Research Center found 48% of Republicans believe in climate change (compared to 85% of Democrats.) The green café and carbon-neutral desserts were so successful that the brothers opened their second store in NoLIta in 2010, where they hosted this year’s fundraiser.

As she lined up her playlist at the event, DJ Erika Spring said, “I really appreciate people who are having these kinds of fundraisers, not only to raise money, but to talk about what’s important to the community of New Yorkers and Americans.”

At 10 p.m. the fundraiser had wound down and the Little Cupcake staff politely ushered the crowd out into the night on Prince Street. The Obama supporters could grab one last carbon-neutral cupcake with the words ‘Carbon Neutral’ written in forest green icing on the top. With the countdown to Election Day in full swing, there was only one thing to do: let them eat cake.

An affirmation of LoBuglio’s efforts came on November 1st, a week after the fundraiser. In the aftermath of Hurricane Sandy, Mayor Bloomberg’s communication team commissioned a cake from LoBuglio as a pick-me-up for the Mayor and his office. LoBuglio fashioned a cake with the words “Thank-You Mr. Mayor for #SurvivingSandy” iced on the top. Later that day Bloomberg, whom remained independent throughout this and the 2008 election, endorsed President Obama. Bloomberg cited Obama as the candidate better suited to address the issue of climate change, which Bloomberg blames, in part, for the destructive forces of Hurricane Sandy.