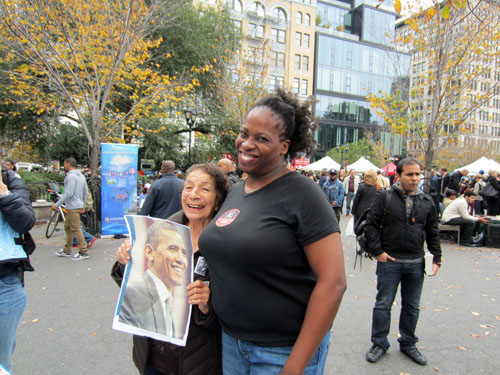 Before Mitt Romney’s infamous dismissal of the 47 %, before the presidential debates, the Big Bird tweets and the CNN polls, long before the destructive arrival of Hurricane Sandy and her devastating aftermath, Evelyn Polk, an octogenarian and classically trained pianist, decided to join the political fray.

This past March, as a team leader of the Obama for America organization, Polk set up a table in Union Square on a Saturday, stocked it with Obama buttons, and rounded up volunteers to register passerbys to vote. From spring until the election, Polk was out at that table every single weekend, only missing two Saturdays; one in early October, due to a cold, and the last Saturday before the election, due to Hurricane Sandy.

In the beginning, this was a thankless experience. Mia Anderson, a tall black woman who met Polk at a phone bank and was recruited to volunteer at the table, confirms that “April and May were not awesome.” The election was not on the national radar quite yet, and responses ranged from apathetic to hostile. “What really made the change was the Democratic convention in September, there was a huge shift after that,” Anderson said.

So how did Polk find herself in Union Square in March, a full five months before her efforts were perceived as relevant?

It all started in 2000. Up until then, Polk voted every four years, but that was the extent of her political involvement. And then “Al Gore got cheated,” Polk said. She waited for a strong reaction to this blatant injustice but instead, as she puts it, “Everything kind of petered out and I decided that there should be more people who are interested so that it would never happen again.”

She has been active in every national election campaign since then. In 2008, she was a poll worker at a children’s museum downtown and therefore unable to follow the hourly updates on poll results. Polk remembers that night fondly; “I think we got out at 10, 10:30 because we had to wait for the machines to shut down. I was walking up Broadway, and I couldn’t find anyplace that was open that had a TV set…By the time I got home, McCain had conceded…I was so happy.”

For Polk, there is even more at stake this time. Small and visibly frail, Polk, at rest, looks her age. When animated, she looks years younger. She is good at keeping the years at bay. A former concert pianist, Polk still gives public performances and in addition to manning the Obama table at Union Square, she volunteers at a local Obama phone bank every Wednesday. She was scheduled to get on a bus to Ohio to canvass before a bout with the flu forced her to cancel. However, she said proudly, “My daughter and my two grandchildren will be in Ohio right up until the election.”

At her table in Union Square on a Saturday afternoon in late October, she had already been standing in the gray fall chill for hours, cheerfully handing out Obama pins and encouraging anyone who stopped to sign up to volunteer. Clearly well-known in the area, friends and acquaintances frequently stopped by just to say hello. This particular Saturday, Polk was joined by volunteers Martha Wolberg and Shirley Robinson, fellow senior citizens and, by this point, all good friends. The three have spent a lot of time together over the past few months, swapping jokes and attempting to calm each other’s pre-election jitters.

Martha Wolberg, a round woman with carefully maintained short white hair and carefully applied eyeliner, has always been a politically aware “news junky,” in part due to a long career working in the market research department of major news organizations, including Reuters and the Associated Press. She did not become politically active until 2008. Newly retired, she joined the Downtown East for Obama, and has been coming to the Union Square table since March.

She supports the President’s healthcare reform; Romney’s plans for Medicaid and Medicare deeply trouble her. As a senior, she collects Social Security and depends on Medicare for her health insurance. “I’ve paid into those systems,” she said. Paul Ryan’s voucher system worries her: “What am I going to do with a voucher?” A cancer surviver, she says, “I was paying twenty thousand dollars a year for insurance before I was on Medicare. Thank god I had it in my IRA, but what about the other Americans who don’t have good jobs, who don’t have that money?”

Volunteer Shirley Robinson, 78, a tall, thin woman with big, thick lensed glasses, has only recently become politically active. “This is the first time I’ve volunteered in an election, and probably the last…I’ll be eighty pretty soon so I may not have the energy but I feel so strongly about Obama,” she said. Now a widow with a grown daughter, she is motivated by her memories of the experiences of women friends before abortion became legal. Robinson recalls that she knew girls “who were damaged and who died at the hands of illegal abortionists…they were so desperate that they felt they had to do that.” Widowed now, Robinson is terrified that if elected, Romney intends to reverse Roe vs Wade and says, “We can’t have that back.”

The three women had planned to be at Union Square on Saturday November 3, but Hurricane Sandy upended their plans. The day before, Robinson called me from Grand Central, where she was sitting on the floor, waiting for her cell phone to charge. As of Friday afternoon, her apartment on 14th street was still without power. Robinson expected to turn up at Union Square the next day, hoping that despite the group’s inability to communicate, others would turn up as well. Mia Anderson had the same plan but ultimately refrained. Anderson had tried to call Polk numerous times (her calls went straight to voicemail) and emailed her twice, but had not heard back by late Friday night. “That is not like her,” Anderson told me. Polk lives in the mid-twenties, well below the power line. By Saturday, with cell phone service still patchy in lower Manhattan, no one had been able to contact her.

Hurricane Sandy dumped a million tragedies onto the city of New York. Even the small ones hurt. November 3 should have been a celebration of passion and commitment; all their efforts had led to this last Saturday, days before the election. But Union Square was empty, the table not to be found.

Anderson recognizes that Hurricane Sandy has dramatically affected the election, saying, “It is difficult to push people to vote when their basic needs are not being met.” Still, she plans to be vigilant in her efforts to get out the vote right up until November 6.