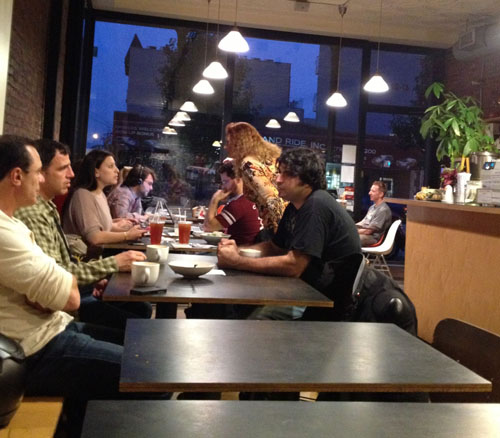 The scene at a knitting Obama fundraiser. Photo by Megan Soll

On a recent Friday evening at the Long Island City coffee shop, Communitea, a sign on a chalkboard read: Stitch and Sip: A High Tea Fundraiser for President Obama. There was a warm smell of cookies, and the counter was cluttered with muffins and pastries in bell jars. A dozen people milled around a table at the front, covered with skeins of colored yarn and knitting needles.

Obama’s election campaign offers grassroots fundraising opportunities, where individual citizens can create a fundraising page, set a goal, and get their friends and neighbors to donate to the campaign. Amy Stephenson and Robin Cole decided to participate and and the “Stitch and Sip” event is their concept.

“We did a similar event in 2008 in the Upper West Side,” says Cole. A Manhattan resident in her mid 50s, Cole is the owner of Robin Cole Recruiting in Hells Kitchen. She wears a purple sweater and houndstooth skirt with gray stockings, and her shoulder-length blonde hair is held back by tan glasses on her head. Her idea was to bring Obama supporters together to donate, and spend time knitting or learning to knit. As Cole put it, “It’s a good excuse for people to get together and do what they love.”

Amy Stephenson set up a lap top computer, to keep track of the donations. She is in her mid 40s with curly dark gray hair, and wears black glasses.

“I don’t usually go into rant mode but I feel there is a really obvious and clear choice this time around,” she says. “I want to feel like I have stepped up and done something that isn’t just sending in money.”

Stephenson, a Queens resident, notes that obviously the money is important, but she emphasizes the importance of bringing people together and showing a fun side. “A lot of the events that you can find are important things to do like phone banks, but we thought this was a good alternative for something on top of that or around your schedule, that people can enjoy as well.”

Penny Hale, an older woman with copper-colored hair and fellow Queens resident, was knitting a black hat. “I live nearby and I come in here all the time,” says Hale, “When I saw the sign they were going to do this for Obama I thought ‘Oh great!’” She works as a physician at an urgent care hospital in Hamilton, New Jersey. She is interested in the presidential race and wears her “I Voted” sticker proudly, adding, “Right now is when it’s fun.”

Locals drift in over the course of the evening to chat and donate. A young blonde student at Barnard College, a representative from the Obama campaign who would not give her name, acted as a liaison and promoted two sign-ups for future campaign events. Multiple quirky gift bags sat on the table across from her, all with a cartoon of Michelle Obama in a red dress on a swing, and Bo, the First Dog, depicted on the sides.

“We’ve been reaching out to contacts through Facebook and Twitter,” says Stephenson, when asked about promoting their event, “Because New York isn’t a battleground state, it’s easy to lose sight of what you can do. We contacted local knitting shops who’ve been supportive.” Downtown Yarns gave a 10% discount to those who mentioned the event when buying their knitting supplies.

Another yarn company on the Upper East Side, Knitty City, donated six bags to be raffled off. “We can do door prizes, which is awesome!” says Stephenson, “Even just with the quick work that we’ve done on top of our full schedules its been great having organizations stepping up and helping out.” Communitea extended its hours for the event.

Towards the end of the evening, the group dwindled down to several of Stephenson and Cole’s friends. A young woman named Stacy, with electric red hair and numerous tattoos, taught others how to knit. The Barnard girl deserted her laptop and joined in. The Michelle Obama bags were given out with knitting prizes inside to a few of the remaining participants. Communitea began to close down.

Stephenson is already thinking ahead to four years from now. “I hope for the next election we’ll be out here supporting Obama or Hillary or whoever is running.”

She takes pride in how they have contributed, “We’re a close-knit group,” she says, “If others are stepping up, why not us?”