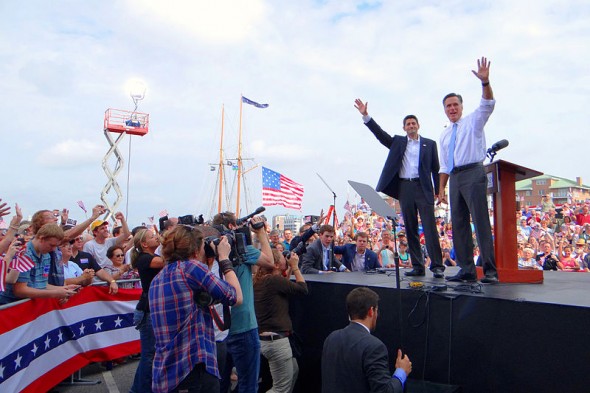 Republican nominee Mitt Romney, right, with his running mate, Paul Ryan, at a campaign event in Norfolk, Va. Technological advances present challenges to privacy for politicians and the courts. Photo courtesy of Wikipedia.

When Republican presidential nominee Mitt Romney told donors what he thought of “47 percent” of Americans last May, he probably believed the comments were private.

It didn’t take much technology to make them public, very public, and to raise questions about the limits of privacy and of freedom of speech in the midst of a heated election campaign.

Romney was hardly the first candidate to face an unauthorized recording of his comments, in this case, by an unidentified person using a cellphone at a fundraiser in a Boca Raton, Florida, home.

During the 2008 campaign of then-Sen. Barack Obama, a recording of the candidate’s comments behind closed doors that some Pennsylvania residents “cling to guns or religion” caused an uproar.

It may be too soon to declare the death of privacy at the hands of technology, but candidates must be increasingly cautious about what they say even in what seem to be private settings. In an intense race, one slip of the tongue can go viral, and the courts may not consider such recordings to be breaches of privacy.

Andy Sellars, an attorney at Harvard’s Digital Media Law Project, said it will take time to see how technology changes the concept of privacy.

“Courts are slow at adapting to new technology,” he said. “The remedies that a court can apply with regard to the First Amendment have no weight anymore because, once something is online, it’s not going away.”

The “something” in this case was Romney’s statement that 47 percent of Americans pay no federal income tax and view themselves as victims. The First Amendment to the Constitution protects both freedom of speech and freedom of the press. In cases when a conversation is recorded and the information disseminated, these two freedoms work in conjunction.

“When the conversation is a matter of public concern,” Sellars said, “and the person who disclosed the conversation was just looking after the public, and not involved with the recording, then the First Amendment protects that disclosure.”

Mother Jones, the news organization that published the Romney video, received information from a non-press source and chose to disclose the information. The legality of the actual recording is under scrutiny — there are laws that protect citizens’ privacy — but Mother Jones cannot be held liable because it didn’t have a hand in the recording.

“As long as the press did not unlawfully acquire the information, they can publish it” without fear of punishment, said David Hudson, a lawyer and scholar at the First Amendment Center. He added that, in the age of “citizen journalism,” the distinction between a citizen and a member of the press “can be a little problematic” in terms of the law.

The public wants and needs to have all the information it can about a candidate, says Irina Raicu, who runs the Internet Ethics Program at Santa Clara University.

The U.S. Constitution does not guarantee a right to privacy, nor does it define privacy. Article 1 of California’s Constitution does explicitly guarantee this right, while other states and the federal government “have to find it from various echoes,” according to Raicu.

States decide their own laws regarding consent to recording. The federal government, 37 states and Washington, D.C., have determined that only one party, the one making the recording, need consent. The other states require the consent of all parties. Romney was recorded in Florida, an all-party consent state.

Jeff Hermes, the director of The Citizen Media Law Project, writes in an article that, even if consent cannot be demonstrated, the recording may be legal if no reasonable expectation of privacy existed.

Hermes also writes that, in order to demonstrate a reasonable expectation of privacy in the U.S., a person must prove that he or she had intent to keep the matter private, and the expectation of privacy must be one that society recognizes as reasonable. This is unclear in the Romney case, but it reflects the historical foundation that the freedom of the speaker is more valuable than forcibly keeping their speech or expression private.

Legal issues aside, what does this mean for politics?

For the Obama campaign, it means regularly collecting cell phones at the beginning of private gatherings, according to David Nakamura of The Washington Post who watched people at such an event put their phones into plastic bags and turn them in.

Romney’s staff discourages any recording at events by displaying signs asking attendees not to record audio or video. However, donors are allowed to keep their phones, according to a Chicago Sun-Times blog post.

The issue of privacy is not new, but the relationship between technology and the campaigns is just beginning. For presidential candidates, it means being extremely careful about what they say. Once a slip has been recorded, there is no telling how far it may go.