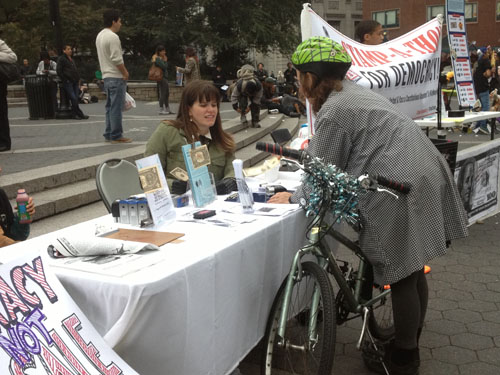 The scene at the Stamp Stampede event at Union Square.

“Bring it on! Bring on your money!” chanted a nicely dressed middle-aged man in a sports jacket as he paced the edge of Union Square Park waving a handmade poster. He sported a genial smile as he eyed park pedestrians—spandex-wearing bike riders, construction workers, couples on a tender stroll, locals leaving the Greenmarket and high school students picnicking after class. He attempted to persuade them to draw a few crumpled Washingtons, Lincolns, or Jacksons from their pockets, but he’s not offering a tap dance, a freestyle rap, or an impromptu charcoal sketch. He’s doling out free gourmet ice cream.

The energetic activist is a friend of Ben & Jerry’s co-founder Ben Cohen and was one of the many volunteers at the Stamp Stampede Stampathon for Democracy, a public awareness event at Union Square Park held on Wednesday, October 24th. The group was rallying around the current presidential and mayoral elections in a way that did not involve raising funds, choosing teams, parading red or blue and donkey or elephant gear, or gratuitously praising the attributes of one candidate or another. The Stamp Stampede and its mini-marathon (12 hours of stamping cash) were conceived by Cohen with a campaign finance reform initiative in mind.

With his halo of silvery curls, Cohen shook hands with men and women dressed in thick scarves, puffy coats, and fuzzy gloves. Members of Cohen’s “Stamp Stampede” were trying to persuade citizens to mark their cash with catchy phrases like “Democracy is Not For Sale,” “Not to be Used for Bribing Politicians,” and “Money isn’t Free Speech” in bold, red ink, an act they assure is legal. In return participants would get their decorated bills back with a free scoop of Vanilla, Cherry Garcia, or Blueberry Vanilla Graham Ben & Jerry’s ice cream.

Standing confidently in his black “Stamp Money Out of Politics” tee and a pair of faded grey jeans, Cohen imprinted cash and explained to inquisitive parkgoers that his goal was to “make their money talk by stamping messages on it.” He added, “Big corporations make their money talk by giving gobs of money to politicians” but individuals too can articulate through their “adorned dollars.”

A volunteer called out to passersby, “We’ll beautify as many bucks as you want.” Two white foldable tables stood behind him, equipped with an organized clutter of fliers, pamphlets, rubber stamps, and red ink boxes. A trio of teens were armed with shining metal scoops behind a makeshift ice cream stand. The slogan was featured on a gigantic one hundred dollar bill with a quote bubble stamped next to Benjamin Franklin’s pale olive lips. In thick ruby letters, it read: “Stamp Money Out of Politics: Amend the Constitution.”

Cohen’s non-profit brainchild, equipped with a flamboyant, traveling “Stampmobile” (a gypsy van that was recently featured in Wired magazine), was prompted by the Occupy Movement. His group is focusing on garnering support for an amendment against the infamous Citizens United v. Federal Election Commission, a Supreme Court ruling which allows corporations to make unrestricted monetary contributions to political campaigns.

An elderly woman on a bike wearing a flashy lime green helmet pulled out a booklet of oversized fake money from her backpack and began stamping away. A young mother and her daughter stop by after school and handed a twenty to the female volunteer behind the booth. Teenage students lined up to stamp their singles.

The Stamp Stampede organizers enlisted the help of local grassroots organizations for the event, including the Root Strikers, Money Out of Politics, and Common Cause, bringing together several activist groups interested in campaign finance reform.

Rebecca Arrington, a spirited redhead in a slick leather jacket is the social media coordinator for the local New York Root Strikers chapter. She spent most of her afternoon at the Stampathon doling out yellow neon fliers and seducing participants with her aggressive, but friendly, high volume chants.

Citing a recent Gallup poll, Arrington explained that Americans want the presidential candidates to focus on government corruption. “We know because of these polls that a lot of people feel this way, but I don’t think people are aware that they are not in the minority,” Arrington says. “We need to get the word out and get people talking so much that this becomes unacceptable, because until it becomes absolutely unacceptable and absolutely scandalous … to take a big donation from someone, a person or a corporation, it’s not going to change.”

The Root Strikers have a national base in Connecticut where the group was founded by Harvard Professor Lawrence Lessig, based on the ideas in his book Republic Lost. The non-profit aims to promote publicly funded elections at the local, state, and national level and increase transparency of independent political expenditures.

Dominic Tencredi, another member of the New York City Root Strikers, is a self-proclaimed “apolitical technocrat” who moved from Chicago to New York with his twin brother Tom to launch a web development company, Dom & Tom, Inc. “Most of the time, when push comes to shove, money talks, money always talks,” says Tancredi, who admits that he has not registered to vote. Tancredi likes Lessig’s philosophy, saying, “We all have to come to common ground to change the system, to get to the root of the problem” which is that money corrupts our system of government.

The Root Strikers and Stamp Stampede both emphasize the nonpartisan nature of their causes and hope to appeal to a wide range of citizens, including an avid Barack ‘n roller, a middle class Republican, a borderline radical anarchist or a zealous Tea Partier.

And as Cohen advocates with his Stamp Stampede Stampathon, that first step of political involvement can be as simple as stamping dollar bills and getting your hands a little sticky with red ink and melted ice cream.