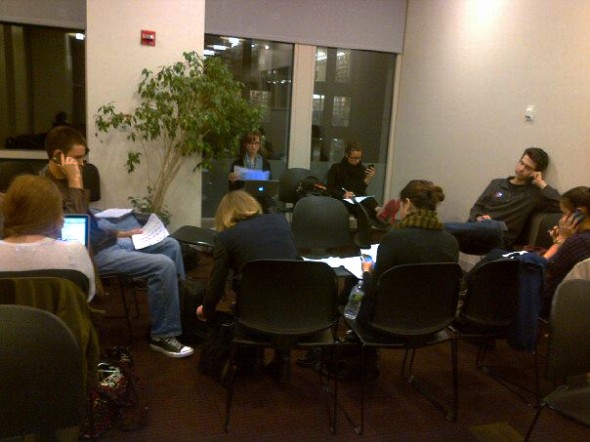 New York University students made 900 calls to voters in just a single day recently, urging them to cast their ballots for Barack Obama – in Ohio.

When they’re not on the phone, they run “dorm storms” – going door-to-door in residence halls – or staff tables around campus to help other students learn how to register to vote or to send in absentee ballots.

The youth vote was crucial to Obama’s victory in 2008; he captured a bigger share of it than any other Democratic candidate in the past three decades. In a tight election this year, both Obama and Republican nominee Mitt Romney are targeting younger voters.

With polls predicting that the president will easily win New York State, NYU’s Students for Barack Obama don’t waste their time on local calls. They focus on Ohio, with its tight race for Electoral College votes that may prove decisive in the Nov. 6 election.

These students are engaged in politics, but researchers believe that civic education geared towards young people is crucial to getting more of young voters to the polls. That’s where groups like Rock the Vote and the Brennan Center for Justice come in.

The Brennan Center at NYU’s law school in Greenwich Village, released a student voter guide detailing each of the 50 states’ residency, registration, identification and absentee voting requirements. With many college students attending out-of-state schools, understanding the voting laws in two states and deciding which state to vote in can be difficult. The guide aims to help young voters fulfill eligibility requirements before Election Day.

The guide includes an interactive map of the U.S. with information on each state’s voting laws and a prompt to promote the guide on social media sites. The Brennan Center’s senior communications coordinator, Erik Opsal, said this year’s guide makes much more use of new social technologies and interactive features than the 2008 guide did.

“We want to make sure that this guide is more user-friendly, works on a mobile device and (is) easier to share on social media. Young people use the Internet more than any other demographic,” Opsal said.

“I think the Brennan Center for Justice’s Student Voting Guide is an excellent resource which every student should be familiar with. There can be no shortage of organizations or volunteers working to get out the vote. I believe the more people (who) vote, the better,” Li said.

On Election Day, student activists from the College Democrats and Students for Barack Obama plan to go to Pennsylvania, another hotly contested state, to get out the vote by knocking on doors, working polls and calling voters. Both groups also work closely with Obama for America.

The Brennan Center works with the youth-oriented organization Rock the Vote to promote the guide. Other youth organizations and student newspapers also get the word out about the guide. In the past, Rock the Vote registered more than five million youth voters using grassroots mobilization and new media campaigns.

Zoe Bridges-Curry, a Rock the Vote spokeswoman, says the Brennan Center’s student voter guide is especially significant because of public confusion over voting regulations. Federal courts have rejected some of the restrictions states passed on identification, early voting and registration – including voter ID laws in South Carolina, Texas and Wisconsin.

“While many of the new voting restrictions won’t be in effect on election day, thanks to challenges from organizations like the Brennan Center and Rock the Vote, these laws are still creating confusion for young people about whether they’re eligible to vote and what they need to take with them to the polls,” Bridges-Curry said.

Both Rock the Vote and the Brennan Center target 18- to 29-year-olds. In the 2008 presidential election, youth voter turnout increased to 51 percent from 48.5 percent in 2004, according to The Center for Information and Research on Civic Learning and Engagement (CIRCLE). However, a recent Pew Research Center poll found that only 63 percent of young registered voters said they will vote this year—a drop from 72 percent in 2008.

CIRCLE, a research organization based at Tufts University, also recently found that only nine states require civics education and testing as a high school graduation requirement. Researchers believe the lack of emphasis on social studies leaves young people uninformed on voting laws and registration. In a poll conducted this summer, the research organization also reported that “80 percent of the young voters were either unable to answer or incorrect about their state’s early registration rules.”

CIRCLE researcher Surbhi Godsay says that, for maximum impact on future generations, civic education and testing should be required throughout primary and high school.

“Young people are growing up in a nation with extremely complex issues, as well as a nation with a political system which is increasingly difficult to navigate,” Godsay said. “Young people need to be provided with the knowledge and skills to be able to solve these problems, both individually and collaboratively.”

Education programs are one way to reach young voters, but candidates also have to engage them. A Pew Research Center survey reports that voters under 30 years old prefer Obama over Romney by a margin of 59 percent to 33 percent. However, a Harvard Institute of Politics poll found that young Romney supporters are more likely to cast a ballot.

Romney and Obama have both campaigned on college campuses. The Obama campaign launched a campus tour in August, and in October, he visited Ohio State University to mobilize the youth vote in that swing state.

“I think a question for the next couple of weeks will be how much investment the Romney and Obama campaigns will make in reaching out to young people,” Godsay said, “and that may make the difference in getting youth to turn out to the polls.”