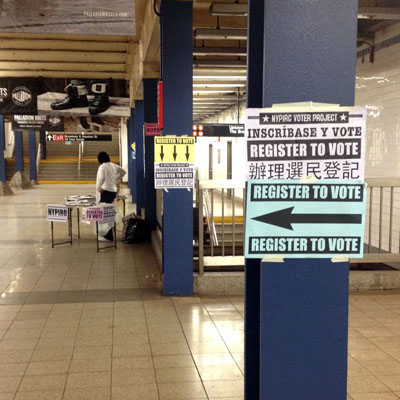 While the number of eligible young voters increased over the past four years, the question remains whether they will choose to cast their ballots on Tuesday. The millennial generation, young adults ranging from 18 to 29 years old, appears less enthused to vote than in 2008 when they played a critical role in the election of Barack Obama.

About 17 million young adults are eligible to vote for the first time in the presidential election. Tallying 24 percent of the eligible voters, the millennial generation can dramatically affect the outcome of the election next week. However, the Pew Research Center reports that just 50 percent of this demographic is “absolutely certain registered to vote” in the upcoming election, compared to the 61 percent who registered in 2008.

Yet key issues such as the economy, unemployment and student debt directly affect the young voter demographic, and more so than other constituencies in some respects. Alex Patricia from The Record reported in October that millennial unemployment rates currently reach upwards of 17 percent. The debt incurred from these higher-level educations remains unpaid as graduates struggle to join the work force. The Pew Research Center found that nearly one in five U.S. households in 2010 suffered from college debt, and that number only continues to rise.

Millennial voter expert Paul T. Conway argues that young voters prove more engaged in the upcoming election due to the significance of these issues—not less so. As president of Generation Opportunity, the nation’s largest, nonprofit organization dedicated to youth voter education and engagement, Conway speaks directly with young voters about the issues that matter most to them as well as their voting plans to do something about them. Generation Opportunity’s recent national polling results reveal that 76 percent of millennials plan to vote. Only 38 percent think that today’s political leaders reflect the interests of their age group.

“Some folks in the media who don’t deal that closely with as many people as we do create this kind of trash narrative about young Americans and how they’re disengaged and too self-absorbed in their technologies and not aware of the world around them. We flat out reject that,” said Conway. With 24-hour access to information and a strong attention to detail, 18-29 year-old voters are much further along in their political thinking than they receive credit for by the media.

Attempting to counter claims of college student detachment from the presidential campaigns, the NYU Student Resource Center helped students register to vote in New York or mail absentee votes to their home states this fall. Beginning with promotions during Welcome Week and continually posting reminders on its Facebook page and Twitter account every other day, the center prompted students to stop by and register before the Monday, October 8 deadline. David Vogelsang, executive director, estimates that the center registered about 600 students to vote in New York. The office also supplied student resident advisors on campus with several hundred additional registration forms that are not accounted for in this estimate.

Some students responded positively to this initiative, such as NYU junior Sacchin Heerah. A native of Trinidad and Tobago and new U.S. citizen, Heerah is concerned about the economy and healthcare and is looking forward to voting. “I have the chance to have a say in something that really does matter,” said Heerah.

As the final day to register to vote at the student resource center came to a close, other new voters still seemed unaware of or uneducated on the various platform issues that remain the priority of the rest of the millennial generation. Christina Lu, a NYU sophomore from Dallas, Texas, admits that she is not politically savvy but is voting simply because she can.

Conway attributes the change in voter registration and engagement statistics to the new focus of young voters. “Back then in 2008, people wanted to be a part of a major change, a transformation in American government. They took the hope and change message quite seriously,” said Conway. “Based on our polling, what people are going to be voting for now are candidates’ positions on issues and their records in public office.”