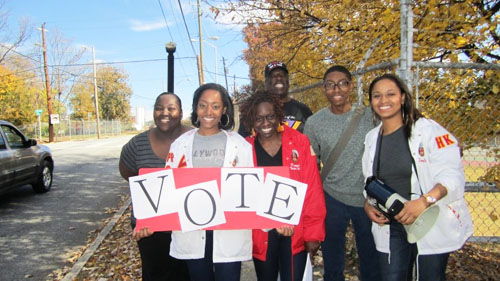 West Africans get involved in the 2012 Presidential Election. Photo by Danielle Tucker

With polls showing that the vast majority of African Americans support President Barack Obama’s reelection, some Africans newly arrived in the U.S. feel they fit right in.

Hima Adamou from Niger claims that all his countrymen prefer Obama over Republican nominee Mitt Romney, whom he likens to former President George W. Bush.

Borley Quaye, who studied medicine in her father’s native country of Ghana this past summer, backs Obama’s healthcare legislation and immigration policy. She plans to cast her vote on Tuesday.

Meanwhile, an NBC/Wall Street Journal poll reports that Mitt Romney has 0 percent of the black vote, indicating that Obama may come close to his 2008 popularity among black voters, who constitute 13 percent of the U.S. population.

Immigrants from African are still a small portion of the population and, of course, not all of them are naturalized citizens with voting rights. However, the number of African immigrants grew 40-fold between 1960 and 2007, from 35,355 to 1.4 million, according to the Migration Policy Institute. Most of the growth has occurred since 1990.

In the upcoming elections, many Africans are concerned with issues that interest other minority groups, and the wider electorate: immigration reform, tax breaks for small business owners and development aid to Africa, according to Quaye.

Adamou, a street vendor selling accessories in Harlem, proclaimed with a wide grin that “Obama is going to win.” He shook his head and declared that, if Romney wins, “this country will go down.”

Borley Quaye, whose father came to the U.S. from Ghana and became a doctor here, says she has paid close attention to the health care debate in this year’s election. As an aspiring doctor, she worries about Romney’s plan to repeal Obama’s health care legislation and about his foreign policy.

“Romney is more concerned with boosting the U.S. economy and fixing other problems internally,” she said. “He’s not really concerned with international issues, especially not African.”

In 2009, Obama made Ghana his first official stop in African as president, choosing the West African country over his father’s native Kenya. That visit was a point of pride for Ghanaians, who gave the first black president of the U.S. a rousing welcome.

Quaye hopes that, if Obama is re-elected, he will try again to pass the DREAM Act, which would open a new path for children of immigrants to stay in the U.S. legally.

Deaweh Benson, a first generation Liberian-American, views Obama as an inspirational leader for countries such as Liberia that are emerging from long periods of civil war.

“As a country struggling mightily to find itself after the horrors of war, we (Liberians) see Obama as a symbol of hope,” she said. But she does not advocate for more foreign aid.

“Most people would disagree with me, but I don’t think Liberia needs any assistance. We are too dependent on the U.S.,” she said, praising the self-reliance promoted by Liberia’s President Ellen Johnson Sirleaf, who is Africa’s first female head of state.

West African immigrants have just as much at stake in this election as natural-born American citizens of African descent, though they may tend to think more about how U.S. policies affect Africa.