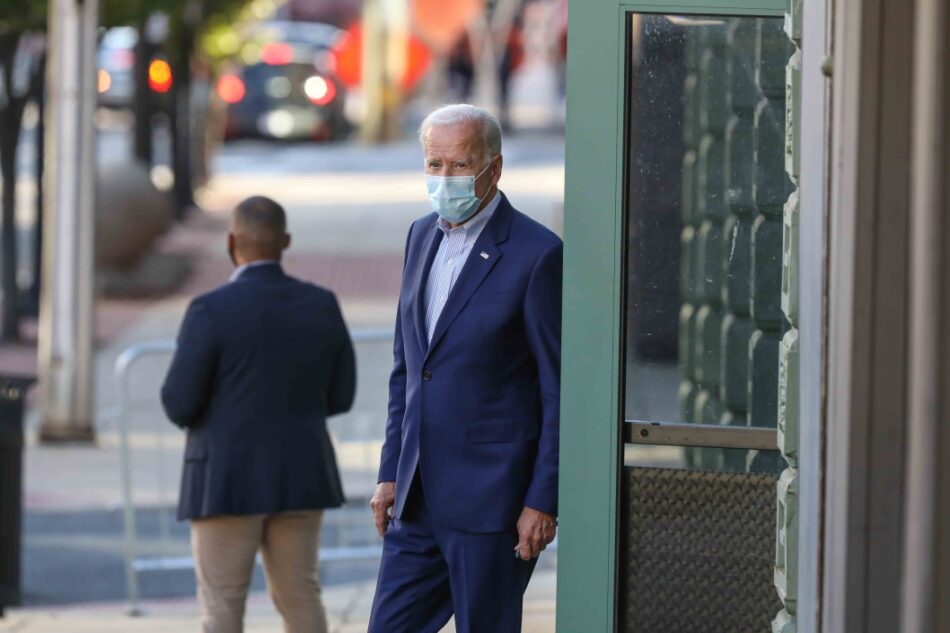 Michigan has pushed Joe Biden one step closer to defeating Donald Trump. Biden’s slender lead that started in the wee hours of Wednesday morning, inched him closer to the 270 electoral votes required for the presidency. The prize was the state’s 16 electoral votes.

On Wednesday afternoon, Biden, who received over 71 million votes, the most in U.S history, was joined by his running mate Kamala Harris at a news conference. He said that he expected to win the presidency, but he did not blatantly declare himself the winner.

“After a long night of counting, it is clear that we are winning enough states to reach 270 votes to reach the presidency,” said Biden. “I will govern as an American president. There will be no red states and blue states when we win. Just the United States of America.”

His statement was by and large in stark contrast to Trump, who falsely proclaimed that he had won the election on Wednesday morning despite millions of uncounted votes and a declared definite win.

“We are up BIG, but they are trying to STEAL the Election. We will never let them do it. Votes cannot be cast after the Polls are closed!” he followed up minutes later in a tweet that was subsequently taken down by Twitter for promoting falsified information.

In 2016, President Trump won Michigan by about 10,704 votes. The president’s success with white working-class voters was crucial to his 2016 victory. While he succeeded in counties like Macomb and Monroe, he also flipped working-class areas in mid-Michigan like Saginaw County.

During the 2020 campaign period, Democrats also worked fervently to increase the turnout in cities with predominantly Black voters, including Detroit and Flint. Three days before the election, Biden and former President Obama held drive-in events in both cities, hoping to create enthusiasm among their supporters.

Before a mostly African-American audience at Flint’s Northwestern High School on Saturday afternoon, Obama referred to his former vice president as “my buddy” and said Biden would unfailingly restore decency and competence to the White House.

In a 25-minute speech, Obama stressed the importance of voting.

In Tuesday’s election, Michigan set a voter turnout record that surpassed the 2008 record set when former president Barack Obama was elected. In the early hours of Wednesday morning, while election workers counted ballots, officials had already tallied over 5.1 million votes in the political race between Biden and Trump. This number surpassed the 5,039,080 benchmark set in 2008.

It is a difficult task to overemphasize Michigan’s importance in the 2020 election. The state — along with Wisconsin and Pennsylvania — is critical to Biden becoming the United States president.

In 2016, president Trump flipped Michigan and became the first Republican since George H.W. Bush in 1988 to win the state. For nearly 25 years, Michigan has been a reliably blue state regarding choosing a president. During his 2020 presidential campaign, President Trump made a total number of eight trips to the state of Michigan, including a final stop a day before election day.

In his 2020 campaign, Trump tried to repeat history partly by organizing his final campaign to rally in Grand Rapids, just like he did in 2016

“This is a poll,” Trump said to the crowd. “This is not the crowd of somebody who’s going to lose this state.”

Democratic vice-presidential candidate Kamala Harris also spent most of her Tuesday in Detroit, where Biden campaigned with former President Barack Obama on Saturday. During his campaign with Obama on Saturday, Biden reminded voters that the Obama administration had rescued Michigan’s automobile industry with government investment after the 2008 recession hit the nation.

By contrast, this year, unemployment rates were starkly high in Michigan; therefore, the pandemic coupled with the economic crisis were pertinent issues in Michigan, where thousands in the state vehemently protested Gov. Gretchen Whitmer’s ordered restrictions to curb the coronavirus.

Trump also openly disagreed with Whitmer’s approach to curbing the pandemic and seemingly shrugged off the threat she faced from a domestic terrorist group’s plot to kidnap her, downplaying its effect.

Following Tuesday’s election, as votes in Michigan continued to be counted on Wednesday, however, President Trump’s reelection campaign filed a lawsuit in Michigan’s Court of Claims, seeking to delay the counting of ballots indicating inadequate access to vote-tallying locations. In addition to seeking to halt counting the votes “until meaningful access has been granted,” the Trump campaign also demanded to review the ballots that were previously opened and counted. The lawsuit came after Trump tweeted several times, spreading misinformation about the overall election process.

How come every time they count Mail-In ballot dumps they are so devastating in their percentage and power of destruction?

While he scored a win in Michigan, Biden also secured a win in Wisconsin, flipping a battleground state that helped President Trump win the election in 2016.

Even before Biden was officially declared a winner in the state, Trump’s campaign said it would request a recount. Like Michigan, Wisconsin is a crucial swing state, and a recount of votes and a lawsuit in Michigan could further delay election results.

Joe Biden’s narrow win in Michigan was also the outcome of an extremely high voter turnout in Detroit. In 2016, Detroit’s Black voters’ underwhelming performance caused Hillary Clinton’s electoral loss. Biden, however, managed to improve on Clinton’s performance in the significant counties around Detroit.