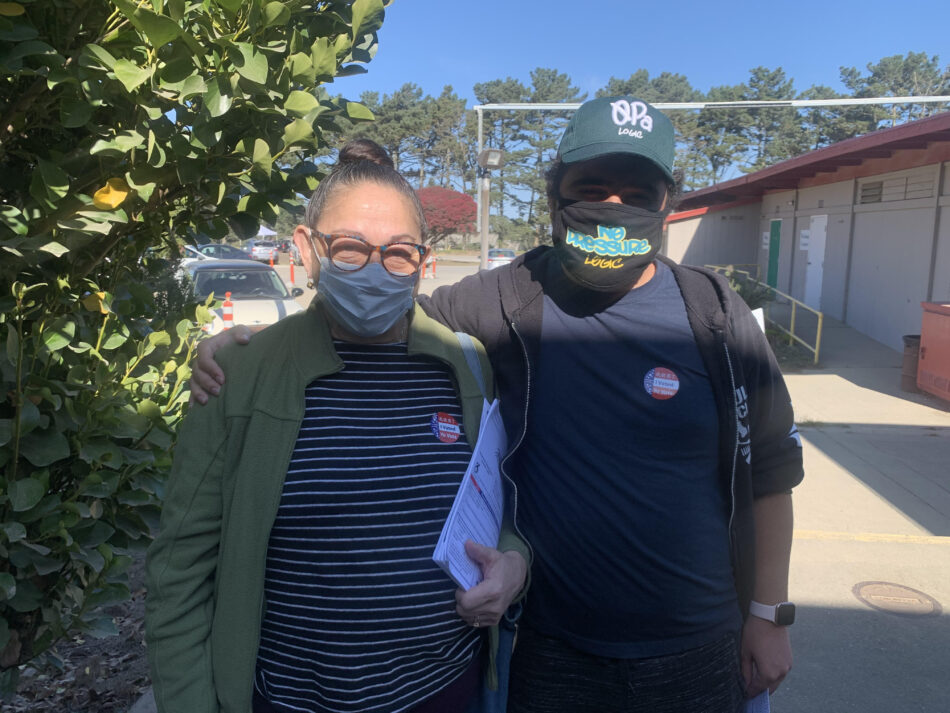 A clear blue sky stretched over Bay Area Election Day morning, with only a few traces of smoke lingering in the air after months of raging forest fires.

In Daly City, just south of San Francisco, an adult education building — a secluded brownstone sandwiched between a Chinese cemetery and a new apartment complex — became just one of the many polling sites that dotted San Mateo County on Tuesday.

“I just deposited my ballot in the drop box. No lines or anything. It was way more convenient for me as an essential worker,” said Tania Chelson, 65, of neighboring Pacifica, sitting on a cement bench outside the building sporting a bright red “I voted!” sticker on her lime green coat.

Chelson — one of many senior caregivers who worked on the frontlines during the pandemic — said her vote has never felt so significant.

“I’ve been in this country for 44 years,” said Chelson, who supports former Vice President Joe Biden. “I’m from Paraguay, raised in Argentina and in all of my life that I’ve been here, this election is by far the most important.”

Her grandson, 21-year-old Arthur Lee Stevens, who accompanied his grandmother to the polls, also cast his ballot for the Democratic candidate.

“Voting in person for the first time actually feels a lot better than voting by mail,” he said, noting the process was quick and hassle-free. “It gives you a real sense of accomplishment.”

“Our generation is the future of this country,” he said, adding that a vote for President Trump is a vote for “someone who does not look for the future.”

“When the pandemic struck, everything got shut down and unemployment is only paying me $82 every two weeks,” said Stevens, who lost his job as a barista due to coronavirus closures. “That’s not a livable wage at all and that needs to change.”