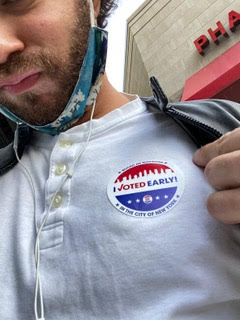 Hector Vasquez, of Brooklyn, is an early voter who supports Donald Trump.

Hector Vasquez, 29, of Brooklyn, does not fit the stereotypical image of a Trump voter.

As a Latino who grew up in the Brownville projects, Vasquez is no stranger to discrimination and hardship.  His childhood saw murders and gang violence, characteristics that Trump attributes to Latinos.  But, now, Vasquez is a successful brand strategist and on Oct. 24, New York’s first day of early voting, he cast his ballot for the Trump.

For the very first time, New Yorkers have the opportunity to vote early in a general election.  Hector Vasquez, 29, joined the ranks of 1.1 million early voters, on the first day of early voting.

“The pandemic is not really something that scares me,” said Vasquez. “I mean I take social distancing seriously.  I wear a mask. I stay six feet apart, but I felt that, to make sure that my vote was more secure, I would rather vote in-person rather than send it via post.”

At the Kings County polling station on Gates Avenue, Vasquez waited three hours before casting his ballot for Trump.

Vasquez did not have much to say on  his reasons for voting for Trump, only that he is distrustful of the former Vice President Joe Biden.  In his opinion, he chose the lesser of two evils.

“At the end of the day, I feel like the country has been polarized, probably for the past 12 years, in two very  different directions,” said Vasquez. “I am hoping we can get back to a place where we can accept whatever the results are.”

Those feelings are not shared by the majority.  Across the country, businesses are preparing for unrest.  New York businesses have started boarding up as early as Oct. 31.  Everywhere from the St. Regis Hotel to the Delancey Street Burger King have secured their windows with plywood.