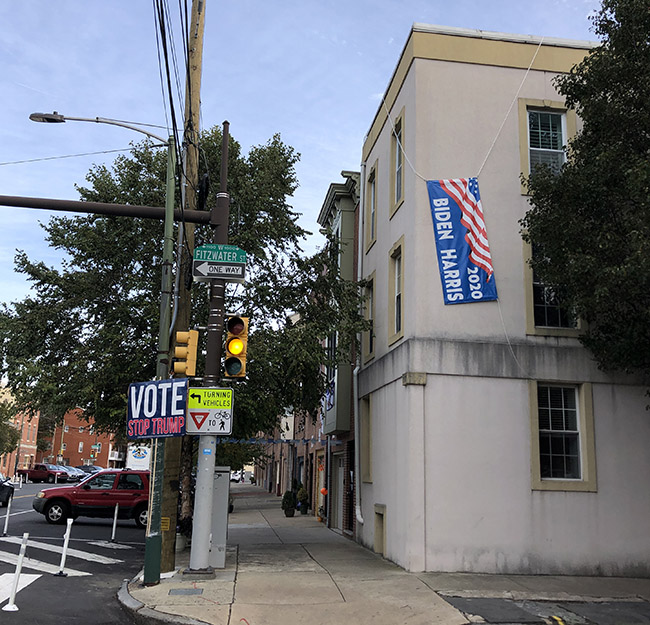 Attention is shifting to Pennsylvania as Trump’s campaign secured the right to watch votes being counted from six feet away. With 763,000 to remain counted as of Thursday morning, anxiety continues to increase throughout the key battleground state. The gap between the two candidates has shrunk to less than  2 percent, with overwhelmingly  blue mail in votes left to count.

In response to Trump’s recent tweet and urgency on Wednesday to “Stop the Vote” demonstrators gathered in Philadelphia and marched into the night chanting “Count Every Vote”. Earlier in the day, demonstrators were met with opposition at the Philadelphia Convention Center, where the votes are being counted. Trump supporters held signs reading “The Polls are Closed.” Pam Bondi, Trump’s campaign attorney and former attorney general of Florida, stood outside the center with court orders.

“We plan on entering that building right now and legally observing,” said Bondi. “If there is one illegal vote cast, it takes away from the great men and women of Pennsylvania who came out and issued a legal vote.”

While some Philadelphia residents stay glued to the news awaiting updates on results, others tried to ignore it.

Sofia Pejcic, a 17-year-old and first time poll worker from Philadelphia, said she doesn’t see the point in following the updates.

“It’s one of those things that already happened, it doesn’t make sense for me to stress about it minute by minute” said Pejcic. “I was following the news before the election but now that it’s already happened, I don’t see the point too much unless there is something actionable I could do. I feel like all we really need is patience right now.”

As the results poured in during the 2016 Presidential election, Pejcic felt the anxiety. Like many, back then, it shocked her as she did not expect the results to come in the way they did. And while it’s upsetting to her to see there is still a close divide, she’s more content with the possibility of Trump winning the 270 electorates this year.

“It’s an acceptance,” said Pejcic. “Once you’ve done everything you can — you’ve worked the polls and you’ve tried to increase voter turnout —  but at that point, what the people vote, is what they vote.”

When Gray Lepley, a 34-year-old citizen of Camp Hill, Pennsylvania, went to bed the night of the election, Trump was leading by 11%. But when her husband came to bed at 2 a.m. the number did not budge. It upset her, especially in light of the social unrest and other issues that have come up in the wake of the global pandemic. She thought more people would have been gung ho to vote out Donald Trump.

“I thought we were in a better place.I thought it would be even more split towards blue, “ said Lepley, 34, a resident of Camp Hill, Pennsylvania and mother of two. “I find it really disheartening.”

Until recently, Leplay identified as a conservative. A moderate, but definitely a conservative. Largely in part due to the events of this past year and the President’s response, she switched her party registration to Democrat. She acknowledges that Trump’s policies would likely be better for business, but right now, that’s not the most important thing to her.

“I think this election has put into sharper focus, what are things that I actually care about in my life, and is it the economy? To a certain extent yes, I work in finance, but to me social justice and the future of our country are more important to me than a few years of maybe better economic situation,” said Leplay. “The way he has handled the pandemic, honestly atrocious.”

As of Wednesday evening, the votes that have been tallied indicate this divide. According to the Philadelphia Inquirer, in Philadelphia, its surrounding counties, and Allegheny County, Biden led by about 660,000 votes. Outside of those counties, Trump had a roughly 918,000-vote advantage.

John Burke, a 30-year-old resident from Doylestown, Pennsylvania, acknowledged the pronounced political divide throughout the state. Burke’s mother works for the Election Board of Bucks County, a county that has not yet been called in Pennsylvania.

“If Trump does pull off Pennsylvania, it won’t necessarily shock me,” he said. “You get the suburbs — Philadelphia, Pittsburgh and Allegheny County — that typically lean left, but driving around the state — Scranton, Allentown — you see sign after sign for Trump. It’s’ just two different opinions and there is a lot of support one way or the other.”

Burke thinks Trump will take the Pennsylvania win, but Biden will win the overall election.

“I think it’s over,” he said.” It’s a matter of when in my opinion of when that will happen at this point.”