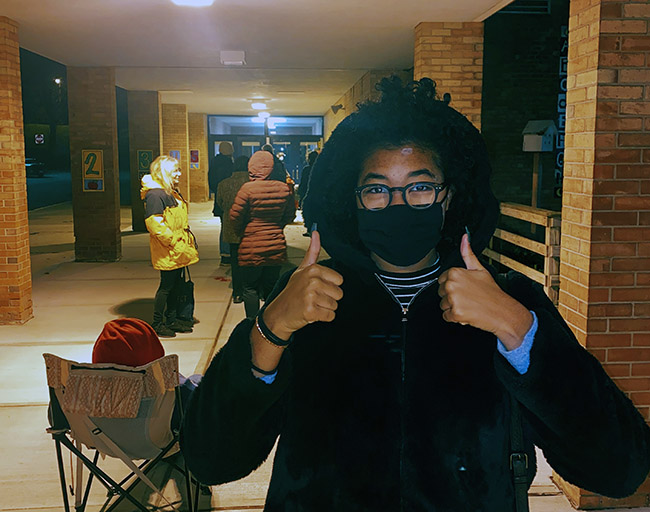 Burns, 20, is an NYU junior who voted for the very first time in-person at her hometown elementary school in Norwalk, Connecticut. She felt a weight lifted off of her back upon learning that Biden won after the past four years of Trump’s presidency.

“I was praying to God that love would win,” she said. “Joe and Kamala, as a combination, especially Joe, represent love and love winning overall over all these things Trump embodies.”

She said that voting in person on Election Day was empowering and she felt a sense of pride as an American among her community at the polls.

“It was really uplifting and also very easy, but also overwhelming to know that I held a power to elect someone into the most powerful office in the world,” she said.

She said that she didn’t like the version of America that the country had become under Trump’s leadership.

“We were at a fight for America’s soul and I did not want the America that I live in to look like that, of somebody who embodies white supremacy and xenophobia and misogyny,” she said. “When Obama was president, I think we were making a turn for the better in terms of social constructs and how we think about things.”

Burns wants the very first change within the government to be better handling of the coronavirus, but isn’t exactly sure how to go about changing the systematic racism plaguing our country because she doesn’t know if it will ever go away.

“I think that throughout Trump’s presidency we have lost sight of humanity,” she said. “The way he’s treating children and women at the border is disgusting, he’s giving people illegal hysterectomies and I hope that humanity is brought back to our country and that we remember that those people are still human and we still need to treat them with respect and love and try to be compassionate.”

Burns said  she has faced racism, mostly in the forms of microaggressions, and hopes that these incidents will start to disappear with Biden and Harris’ leadership.

“I’ve had girls constantly talk about how I’m lucky to be Black because I have a butt and then grab my ass – in high school, that happened to me a lot,” she said. “I hope that because we have a black woman who is very strong and proud to be black and very involved in her culture, I hope that people stop doing those things and realize that we are a strong group of people.”

Upon learning the election results on Nov. 7, Burns felt an incredible sense of relief. “I feel so much safer – two hours into him winning, I was sobbing on the floor,” she said. “I know that he believes in equality and representation and he loves me. He was willing to stand behind a Black man for eight years and here he is with a Black woman by his side. I felt relief – for the first time in the past week, I slept for 14 hours, because I feel safe now.”