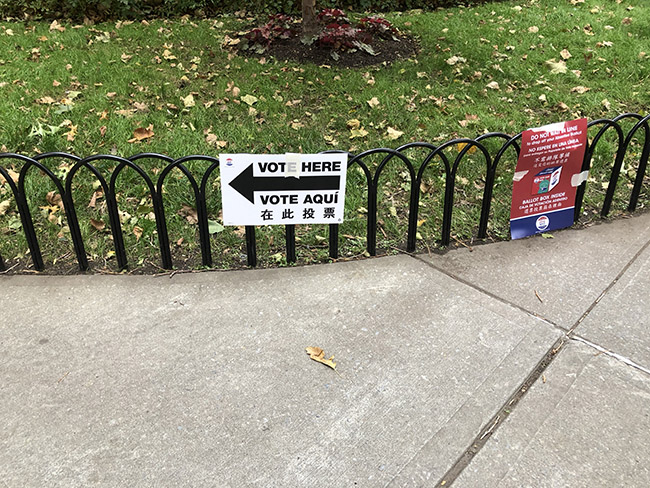 Signs lead you to the polls at Stuyvesant Town, on the edge of the East Village.

It is noon on Election Day and several poll workers greet voters at one of the many polling locations in the 80-acre Stuytown complex, just north of Alphabet City.

There was an initial rush and a line about an hour long at 6:00 a.m. when polls opened, but that has since died down, according to the poll site coordinator. Voters like Nicole Milazzo and Heather Cohen entered and exited the building within minutes.

Both of these women voted for Joe Biden. To them, the president is deplorable.

“I don’t think [Donald Trump] is a very nice human being, and I don’t think what he has been portraying for the past four years is presidential, or someone that I want as a leader,” said Milazzo, 35.

She hadn’t supported any candidate during the Democratic Primary, but knew she would vote for whoever became the nominee.

Cohen, 33, was an Elizabeth Warren supporter before the senator dropped out of the race. Her distrust of the president led her to support Biden.

“The alternative [to Biden] is hideous and has been hideous for four years now,” she said.

The more than 230,000 deaths caused by Covid-19 in the United States loomed large in Cohen’s decision.

“It is appalling that so many people in this country died unnecessarily because of the inactivity, negligence, and flat out cruelty of this administration,” she said.

Despite Covid-19 and access to mail balloting, Cohen felt it was important to vote in person.

“I enjoy voting,” she said. “I wanted to make sure my vote was counted. I know sending [mail ballots] in is problematic. I’ve personally experienced mail delays, so I didn’t want to chance it.”

Countless establishments in New York and other major cities have boarded up doors and windows in anticipation of mass civil unrest following the presidential election. Milazzo believes some kind of unrest will take place, but Cohen isn’t so sure.

Milazzo shared that her friend’s daughter had to participate in a lockdown drill “because of the election” this week at her daycare.

“I honestly did not think about the possibility of [civil unrest],” she said. “I’m hoping for the best, but I’m probably not going to leave [my apartment] late tonight at all.”

“I think that’s rather inflammatory,” she said. “I don’t think the next week is going to be easy, but I don’t believe that [there will be civil unrest].”

Both women are generally optimistic about the election.

“I’ve been really impressed with the amount of people all over the country that I’m seeing who have taken a real interest in politics this year,” said Milazzo. “I felt like that wasn’t the case the last four or eight years. No matter what happens I think we’ve all learned something.”