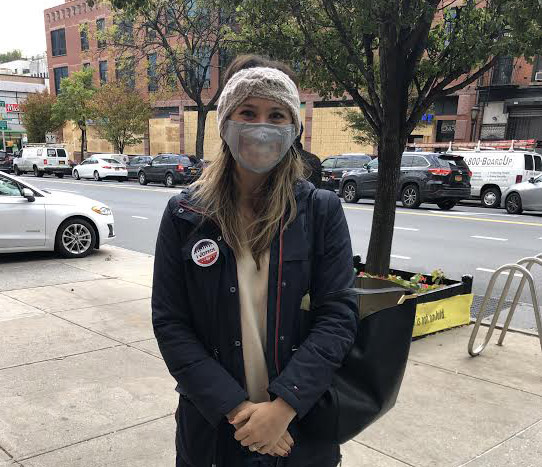 Leigh Rondon, 33, of Cobble Hill, Brooklyn had an easy time at the polls. Photo by Alessandro Malave

On the border of downtown Brooklyn and Cobble Hill, one polling site showed few signs of the voter fever that had swept the rest of the city on Election Day.

A small cluster people stood outside of the Dodge YMCA at 225 Atlantic Ave. just before 11:30 a.m. on Tuesday beneath an overcast sky that had placed a chilly shadow over the borough.

“I was expecting a long line, but this was real simple,” she said before the wind ripped off her ‘I voted!’ sticker before she could catch it with a laugh.

Voters walked right into the building where a young woman directed them to ascend the stairs up to the second floor.

From there, the sparse stream of people made their way to an auditorium for registration where they were greeted by two women who appeared to smile beneath their masks before showing people where to cast their ballots.

“I think this election just really means to have hope for everybody, have more equality, more rights, and for everybody to be treated as the humans that they are,” Rondon said.