What’s at stake in this election has kept Denise Scudder up at night. She said the future of her healthcare, employment, and equality relies on a nation of split voters and the odds have historically been stacked against her people.

Scudder, 64 stood in the packed lines at her local voting site at Geraldine W. Johnson Elementary School in Bridgeport, Connecticut. She said that her decision carries ramifications for not only herself, but other African-Americans and elders as well.

“I am voting for Joe Biden. Not because I love him, but because it’s necessary,” Scudder said. “The last four years have shown me more than I needed to see and it’s time for a new president.” 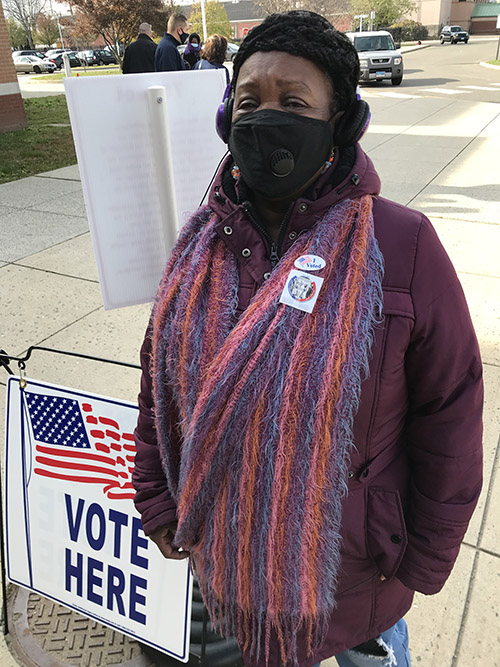 Denise Scudder, 64, believes Black America’s future is on the line in this election.

As an elder in America, healthcare has become one of the central focuses for Scudder in this election. Donald Trump insisting on removing the Affordable Care Act has not been sitting right with this Obamacare beneficiary. In fact, as a huge supporter of Barack Obama’s campaign, Scudder is not only turned off to Trump because of his anti-Obama sentiment ,but has increased her support of Biden because of Obama’s trust in him.

“I’m not convinced Trump has a plan for healthcare that is any better than Obama’s,” Scudder said. “Biden will keep what’s working in Obamacare and add on instead of completely trashing it.”

But, even though Biden will be receiving her vote today, Scudder admits that she is reluctantly voting for him. Although he is the Democratic nominee for president this election, she does not believe they  are completely aligned in their beliefs. Scudder is specifically worried about what the next four years will hold for Black people in America.

“I remember that 1994 Crime Bill and what it did to my community,” Scudder said. “I am hoping the claims Joe Biden makes about his commitment to America’s people of color extend to the Black community in this campaign.”