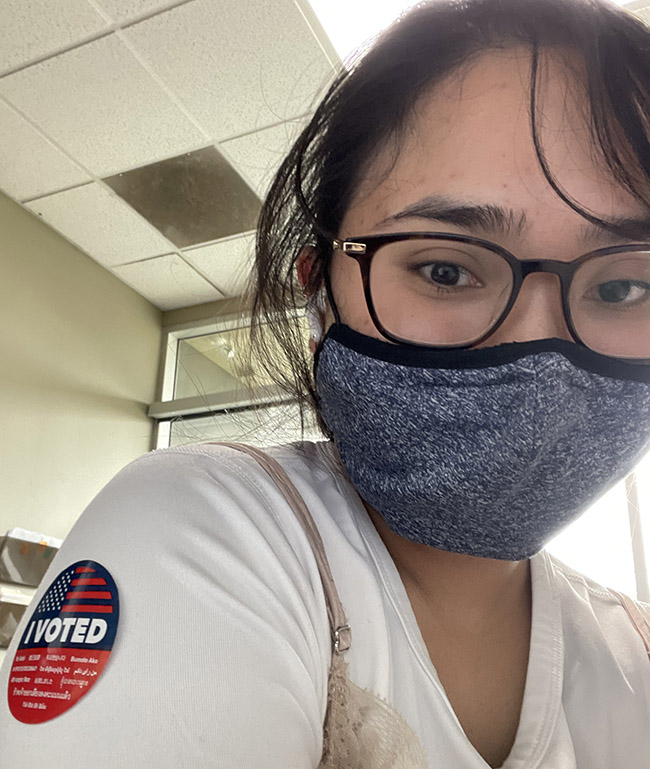 Though they represent completely opposite coasts, two students, Ahmed Yousif and Claire Cruz, are casting their first-ever votes this election with the same bleak outlook for the upcoming term.

Ahmed Yousif, a New Jersey voter, was one of many who voted for Biden purely because he isn’t Trump and as a means of exerting his personal rights. But he doesn’t see Biden as someone he truly supports.

“[Voing] is important because the leaders of this country should be selected by the people, and having the power to elect these leaders is one that should never be neglected,” Yousif said. “I’m not happy about the current state of this country’s leadership. I don’t think there is a good option, just a lesser evil.”

Though Yousif hopes for a better system in the future where he truly has the power to choose a candidate that he supports, in the meantime his focus was on damage control of the effects of the current presidency.

“I think the biggest outcome from this election will be the introduction of a new coronavirus plan,” he said. “I believe Biden will win and his stance on the virus is drastically different than Trump’s.”

Yousif neglected to mention support for any one of Biden’s other policies.

Claire Cruz, a California voter, is similarly voting for Biden because she has wanted to vote against Trump since his 2016 campaign. She hates what she sees as Trump’s lack of morals and experience, as doesn’t believe that he should have ever been in power.

“Having lived through a Trump presidency, I do not hesitate in stating that he is too far unqualified and ignorant to hold a high position of power,” Cruz said. “[His] denial of wrong doings, deflection of questions, and lack of open-mindedness was a consistent problem, which I don’t wish to deal with as a working adult and student.”

While Cruz had a number of reasons why she opposed Trump, she had very few to account for her support of Biden. She stated that she made the choice to vote for him because he does not as drastically counter her personal morals, and, again, because he is opposing Trump. Cruz referred to her vote as more of a compromise than a choice.

“I settled for Biden and Harris, who I believe represents the U.S. as a diverse nation that is capable of unity,” she said.

Also similarly to Yousif, Cruz mentioned her disdain for the current electoral system, and clarified she did not vote for Biden because of party affiliation.

Neither Cruz nor Yousif seemed to believe that the election would help welcome real, long term change, regardless of outcome. Cruz, in particular, additionally feared the post-election response from Trump.

“Trump’s presidency started with chaos and will surely end with chaos,” she said. “Being the man-child I believe Trump to be, I am sure he will throw a tantrum, unwilling to let go of his high position.”