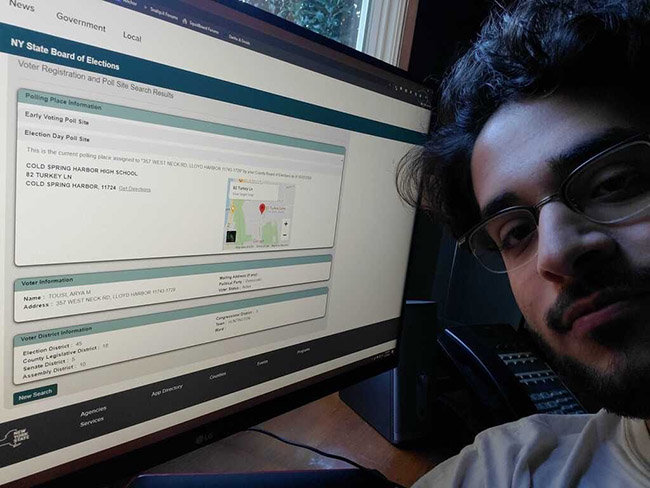 Arya Tousi did not have a great voting day. Photo courtesy of Arya Tousi

For Arya Tousi, early voting in Long Island did not go without its fair share of snafus.

The 22-year-old NYU alum first arrived at the Dix Hills Fire Department Sunday before the polling site opened at 9:45 a.m. only to find there was already a long line of people, many in a rush to get on with the rest of their day.

To add to his frustration, there was no parking close by.

I have never regretted being lazy and not applying for an absentee ballot more than today, waiting to vote in the rain for 4.5 hours in between two groups of very loud Trump supporters

To make matters worse, Tousi said, he found himself wedged between the two groups of very outspoken supporters of President Trump, and passing trucks decked out with Trump paraphernalia.
“I really don’t want another four years of Trump for myriad reasons,” said Tousi, who voted for former Vice President Joe Biden. “While I was waiting a dude drove past in a green military jeep with a turret on it, four Trump flags, and Halloween decoration skeletons manning the gun.”

While Tousi appreciated the safety precautions put in place due to COVID-19, the unusually long wait time coupled with the rain and rowdy crowd made him wish he had voted by mail.

“I didn’t get an absentee ballot because voting in person is generally pretty easy,” he said. “I also had a slight aversion to risking my ballot being caught up in the USPS troubles.”