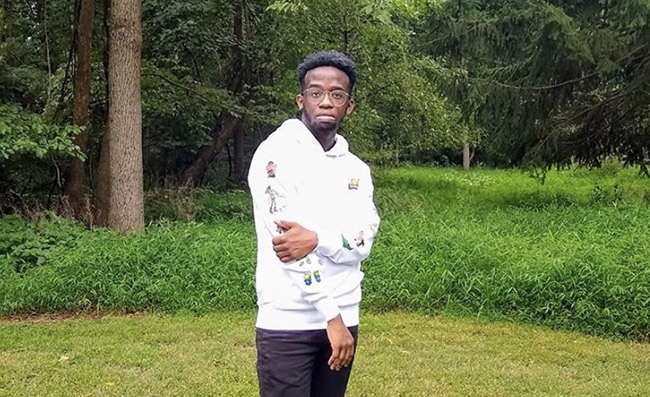 Joshua Olujide is a reluctant voter, but casted his vote for Joe Biden.

With polling for the 2020 presidential election underway, many Americans proudly donned “I voted” stickers as they left their polling locations, feeling validated by their civic duty.

The rally to vote this year has been resounding, with reports of a record turnout for early voting making headlines. Nationwide, people are voting like their lives depend on it and are proud of it too, but on Election Day, you won’t find Joshua Olujide flaunting a sticker or ballot selfie online.

“I was close to not voting at all,” Olujide, 20, of Maryland said. “Not to make some kind of statement or something, but just because the entire system of voting in America is riddled with complexities and suppression that a lot of votes often end up useless anyways.”
Despite voting for former Vice President Joe Biden, Olujide made one thing clear–he’s not pleased about it.

“I utterly despise both candidates, as both will continue to uphold the white supremacist systems that continue to oppress many of the groups that we all claim to advocate for,” Olujide said. “However, Trump has proven time and time again to be an incompetent president, so anything that i can do to remove him, I’ll do.”

After his mail-in ballot never arrived, Olujide headed to a nearby high school in Howard County, Maryland to participate in early voting. The voting process itself was simple–Olujide left his polling location in less than 10 minutes–everything leading up to it was not.

“I never once considered voting for Trump, but the decision to actually vote at all for Biden wasn’t easy,” Olujide said. “He said several things that made me almost not vote entirely, but again, Trump gotta go.”

Morale is remarkably low for Olujide, but his expectations for the future of the U.S. post-election are even lower.

“The stupidity of this country never ceases to amaze me,” Olujide said. “It’d be nice for Biden to win, but I honestly wouldn’t be surprised if Trump got reelected.”

Regardless of the election’s outcome, Olujide is focused on the bigger picture of systemic change, change that he feels neither candidate can provide.

“The net effect on the country would still be the same,” Olujide said. “The revolution will happen one way or another.”