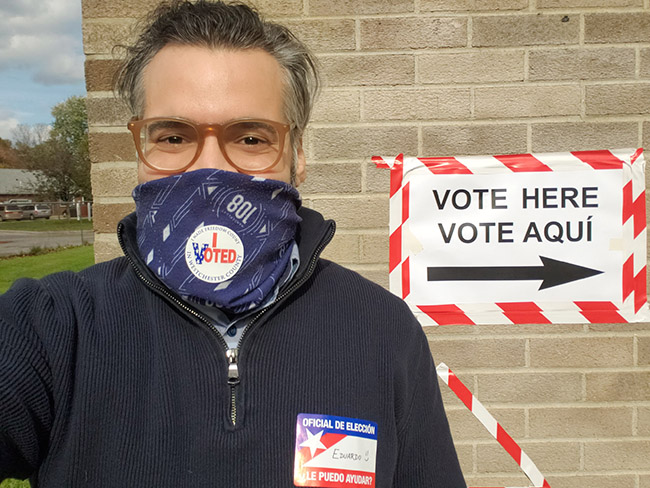 Vanderlinde, 34, the bilingual coordinator of the polling site, cast his vote early on Sunday — giving him time to help out Spanish-speakers on Election Day.

“[I had] to wake up at 3:30 a.m. this morning to arrive at the school at 5 to help set up the polling site,” Vanderlinde said, laughing in between yawns. “In the morning it was a little hectic because of the new iPad system we were using to look up the names…but we eventually got the hang of it.”

Vanderlinde said he noticed that there were a number of voters who felt more comfortable when the instructions were explained to them in Spanish.

According to a Pew Research study, the need for bilingual coordinators like Vanderlinde has increased nationwide with the increase in Hispanic voters.

“It’s been the first time I feel the need to personally help out…not even myself but those who don’t have a voice or are intimidated [by the] process,” Vanderlinde said.

As he gave one final look at the signs he had posted, Vanderlinde sighed, watching a few more voters escape the cold and enter the school.

“Voting right now means a lot,” he said. “I know that whoever we vote for is not going to fix the issues we have…it’s going to be a generational repair we need …but as a Democrat, I know especially now that every vote counts.”