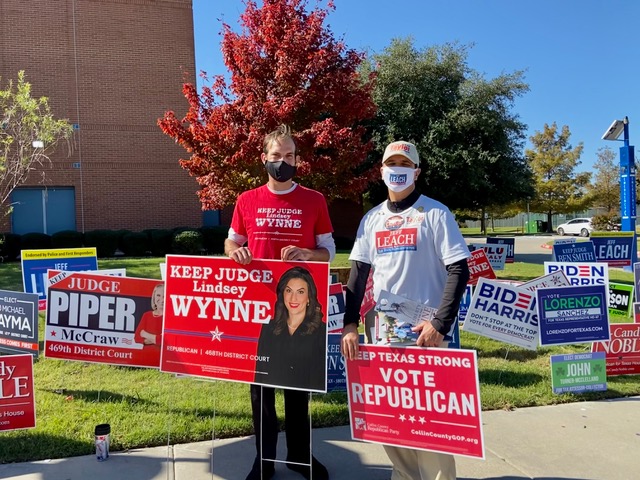 Rocky Byers stood outside Collin College in Texas on Tuesday, stationed in front of dozens of Republican and Democrat political signs that littered the lawn.

But for Byers — who had already cast his ballot last week — arriving when the polls opened on Election Day was really about showing up for his family.

“Everyone just wants to be heard,” Byers as he endured the beating sun in the eastern part of the Lone Star state and held up a sign supporting his sister, Judge Lindsey Wynne. “The divide has been peaceful.”

Primrose said he spent nine of the last 11 weekends knocking on doors as the local Republican Party precinct chairman, telling undecided voters, “Freedom versus control, capitalism versus socialism [or] communism.”

The two men said that the college campus wasn’t a prime location for ballots.

But Byers — who declined to say who he had voted for, maintaining that he didn’t want to influence anyone with his stance — wanted to inspire young voters with their activism, no matter what candidates they chose.

“I’m good to do this on a college campus, even if it is kind of slower than some other locations … you get the youth to see the activism and see how the political process goes on the ground,” Byers said.